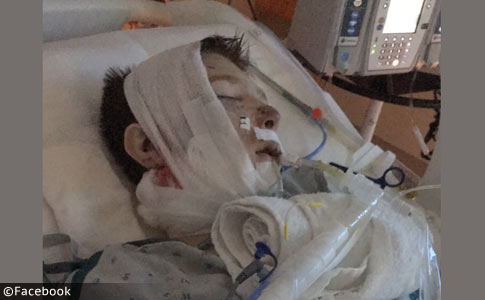 Police News Release
Rolla, MO - On March 22, the Rolla Police Department reported a violent pit bull mauling that left a 13-year old boy with life-threatening injuries. The attack in Rolla came as certain members of the Missouri legislature, once again, attempt to pass a preemption bill that will bar cities and counties from enacting breed-specific laws. Nearly every year since 2014, the Pit Bull Lobby has introduced preemption bills in this Midwest state. So far, these special interest legislative efforts have failed.

"Upon arrival, officers found a 13-year-old male who had life threatening injuries due to the attack. The child was delivering cupcakes to his next-door neighbor when the Pit bull got off his chain and began mauling the child. The owners of the Pit bull began attempting to restrain it, but the Pit bull had the child pinned to the ground while biting the head, neck, and face of the boy. Several adults began pulling the Pit bull from the boy, but the Pit bull was able to break free again and returned to mauling the boy. After repeated attempts, the adults were able to remove the Pit bull from the child and get him to safety, the family and another neighbor began life saving measures by administering first aid." - Rolla Police

Since 2011, over a dozen peer-reviewed retrospective medical studies from Level 1 trauma centers spanning all major geographical regions in the United States -- Northeast, Southeast, South, Southwest, Midwest, West Coast and Northwest -- all report similar findings. Pit bulls are inflicting a higher prevalence of injuries than all other breeds of dogs. The majority of these studies also report that pit bulls are inflicting a higher severity of injuries compared with other dog breeds.

"The data showed that compared with other dog breeds, pit bull terriers inflicted more complex wounds, were often unprovoked, and went off property to attack ... The probability of a bite resulting in a complex wound was 4.4 times higher for pit bulls compared with the other top-biting breeds ... and the odds of an off-property attack by a pit bull was 2.7 times greater than that for all other breeds." (Khan 2020)

"Our data were consistent with others, in that an operative intervention was more than 3 times as likely to be associated with a pit bull injury than with any other breed. Half of the operations performed on children in this study as well as the only mortality resulted from a pit bull injury. Our data revealed that pit bull breeds were more than 2.5 times as likely as other breeds to bite in multiple anatomical locations." (Golinko, 2017)

What do these findings look like when reading a police or news report of pit bull violence? They look exactly like the attack in Rolla. "Noah suffered extreme injuries during the dog attack. His throat, arteries and voice box were exposed; tissue, skin and muscle is missing from his face" and "Reconstruction will require extensive additional surgeries … doctors will have to graft skin and tissue from his thigh to reconstruct his face." The teenager also suffered a collapsed lung.

We recently wrote to Missouri legislators about this attack because it clearly illustrates why some cities adopt breed-specific laws: 1.) The severity of injuries inflicted by pit bulls and 2.) The inability for nearby adults to quickly stop the attack. Rolla police stated: "Pit bull was able to break free again and returned to mauling the boy. After repeated attempts, the adults were able to remove the Pit bull from the child." One adult also sustained a dislocated shoulder during the attack.

"Repeated attempts" are indicative of a pit bull biting in multiple anatomical locations (Golinko, 2017). The West Virginia study (Kahn, 2020) even went further by assigning a definition to a "mauling event" (≥ 3 complex wounds in different anatomical regions). Of injuries inflicted by pit bulls in the study, simple wounds represented 16.3%, complex wounds 83.7%, fractures 36.8% and "mauling" injuries 24%. Pit bulls inflicted 71% of all mauling injuries in the Kahn study.

My name is Colleen Lynn and I am the founder of DogsBite.org, a 501(c)(3) not-for-profit corporation established in October 2007 and incorporated in December 2009, becoming the first national dog bite victims’ organization in the United States dedicated to reducing serious dog attacks.

Leadership members may soon be reviewing SB 107 (companion bill HB 365), which will prohibit local governments from regulating specific dog breeds, primarily pit bulls. Over the weekend, a 13-year old boy in Rolla, Missouri was terribly injured by a pit bull in the “head, neck and face” and illustrates why some cities enact breed-specific laws.

The GoFundMe for Noah describes his injuries further:

"Noah suffered extreme injuries during the dog attack. His throat, arteries and voice box were exposed; tissue, skin and muscle is missing from his face. The dog ripped out Noah’s parotid gland (spit gland) and fractured his jaw. Doctors are uncertain if Noah will regain feeling in the right side of his face or his mouth … He is in Children’s ICU undergoing extensive medical treatment … early surgeries are focused on cleaning and stabilizing the areas impacted by the attack, and mapping the nerves and arteries in his face. Reconstruction will require extensive additional surgeries … doctors will have to graft skin and tissue from his thigh to reconstruct his face."

There are nearly always two elements in a violent pit bull mauling: severe injuries and the inability for nearby adults to stop the attack. In the Rolla attack, "Several adults began pulling the dog from the boy, but it broke free again and returned to mauling the boy … one of the adults sustained a dislocated shoulder during the attack."

The State should not interfere with the right of local governments to proactively protect their citizens.

So far, the GoFundMe for Noah has raised over $32,000. That is close to covering the cost of the airlift to Children's Hospital in St. Louis, which can exceed $30,000. Ambulance air transport (which states cannot price cap1) is often not covered by insurance plans or is subject to the deductible and co-insurance clause. Given the "major injuries" the teenager sustained to his "head, neck and face," his treatment costs will likely be a quarter of a million dollars or beyond.

Certainly, the owners of the pit bull will not pay a dime. Who thinks a home with a chained pit bull has a homeowner's policy covering canine injuries? Missouri is a strict liability state, but if the dog owner is uninsured or underinsured, there isn't a legal case to pursue. Noah was attacked while "delivering cupcakes" to his next-door neighbor. Up until that time, he had his whole life ahead of him. Now, for the foreseeable future, he will be in an ICU bed due to someone else's pet choice.

We seldom write about fatal or nonfatal pit bull maulings in Missouri. For many years, that state, along with Iowa and Kansas, have held the highest concentration of breed-specific laws in the country. That could change this year in Missouri if legislators pass this preemption bill. The city of Rolla never opted to have a pit bull ordinance, but 85 other jurisdictions in the state have. Those jurisdictions want to prevent damaging "first attacks" by a dog breed with well identified risks.

Noah's attack also involved a chained pit bull, which we hear about less often in modern times. Since 2010, chained dog attacks comprised 5% of all fatalities. During the CDC study period of 1989 to 1994, they accounted for as high as 18%. A great number of anti-chaining laws have been adopted since. This pit bull also broke its chain to attack. We have known since 1987 that pit bulls are 14 times more likely to break constraint to attack than all other dog breeds combined.

Noah is under the care of amazing specialists, but he still has a long road ahead of him. He was repeatedly attacked by a pit bull in the head-neck region that took several adults multiple attempts before they could free the child from the dog. He suffered "extreme" injuries in the attack, including bites to his head, face and neck, a fractured jaw and a collapsed lung. Doctors will have to graft skin and tissue from his thigh to reconstruct his face. The definition of a "mauling event."

Meanwhile, certain Missouri legislators are once again jockeying to pass a preemption bill that will prohibit local governments from preventing damaging "first attacks" by pit bulls. Such legislation only protects pit bull owners, including irresponsible pit bull owners like this one, whose dog was unvaccinated and chained in the owner's yard. We hope Missouri legislators make the right choice by continuing to allow local governments the authority to proactively protect their citizens. 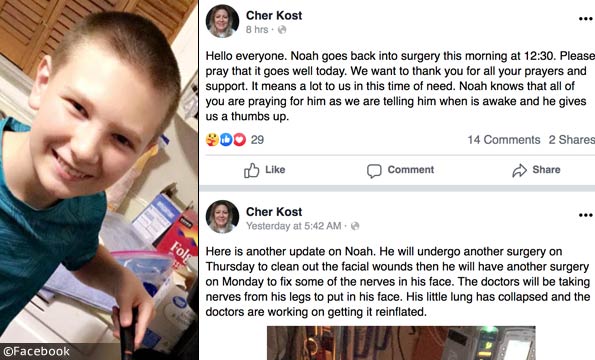 The child's grandmother has been keeping family and friends updated on Noah's condition.

1Air Ambulance transport operates in federal airspace, so states are preempted from regulating the price. Though this ConsumerReports document is from 2017, and a summary from insurance companies is from 2019, they sum up the current dismal state of affairs. Congress actually has to DO something, which is unlikely. One attorney noted that there is little reason to take a dog bite case involving an airlift because the cost cuts so deeply into the settlement. Pit bulls have long been the official "LifeFlight dog," requiring more airlifts than all other breeds combined. So, in addition to most of their owners being uninsured, victims are also stuck with a massive airlift bill.