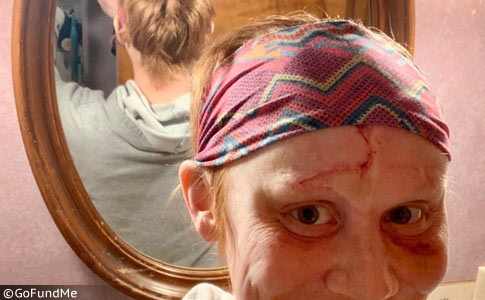 GoFundMe for Surgeries
Wisconsin - In September, Niecie Venzke organized a fundraiser for Denise, who was attacked by her brother's two pit bulls in 1997. The dogs tore off most of her scalp. The fundraiser explains that she is undergoing a new surgery after struggling with sores and infections on her head for many years. "I have had multiple surgeries over the years, but I never had any options for my head. I really felt I was just going to have to live with the skin graft and issues for the rest of my life."

She first visited University of Wisconsin Health in Madison in 2017. "At that time the doctor took several pictures of my head and said he would present my case to his colleagues," she writes. When Denise returned a few months later, she was presented with a plan involving cranial facial surgery. "I was going to have 4 to 5 skin expanders placed under the hair growing portion of my scalp and my forehead and that skin would be stretched over a few months," she writes.

The GoFundMe shows many photos of her scalp before the new procedure. The skin graft does not allow hair regrowth, so she has been wearing a wig for many years. The initial surgery was scheduled for October 15, 2019. She then began the journey of undergoing the tissue expansion that would require 2 to 4 surgeries over the next year. As of May 14, 2020, she has posted 31 updates to the fund. On May 4, she published a video explaining the second phase of her surgery.

Denise explains her life changing surgery of skin expansion to regain feeling on her head.

We strongly recommend watching the full 15-minute video. The skin expanders are in place, so her appearance will appear unusual. Throughout most of the video, Denise is positive and upbeat as she explains the tissue expansion procedure and how she is coping. She also talks about the many incredible doctors and health practitioners she has met throughout this journey. We also learn that she is a single mother with three children, two of which are 6-year old fraternal twins.

Covid-19 has obviously impacted her surgery schedule. Towards the end of the video, she talks about how many images of herself she has had to adjust to since the pit bull mauling. "That's been one of the hardest things mentally for me through this. Getting used to how you look, and then it changing week-by-week. After tomorrow, I am going to look different again." Since the attack in 1997, Denise has had to be very careful to avoid bumping her head and sunburns to her head.

NEILLSVILLE - A truck driver was credited with helping to save a 14-year-old girl who lost her scalp when she was attacked by three dogs at her rural Clark County home.

Denise Seif was hospitalized after she was bitten on her face, arms and hands during the attack Thursday afternoon.

A deliveryman for the United Parcel Service drove into the yard as the attack was taking place.

The driver and the girl's brother pulled her away from the family's dogs - two pit bulls and another dog. The driver put the girl in his truck and drove to Neillsville.

The dogs were euthanized after the attack and will be tested for rabies.

On May 5, she posted a video after the expanders were removed. She states, "The results are better than we anticipated." She said her wonderful Dr. Garland can also add "magician" to her resume. On May 6, she was discharged from the hospital. On May 10, she was able to remove her bandages. "It was so emotional!" she said. "I now have feeling in most of my head and it’s the oddest feeling to touch parts of my head that I haven’t had any feeling in for the past 23 years!"

One week after the expanders were removed, she posted another video update. Much of the swelling had gone down. She said she still has a hard time adjusting to how small her head is now. "It's going to take me awhile to get used to this." The skin graft left her having no feeling on the top of her head. Thus, she lacks an ability to judge distance for her head. This causes her to often bump her head; each time this creates an open sore. The new surgery should reduce this.

Denise provides an update one week after the skin expanders were removed from her head.

Participate in Her Journey

Denise has at least two more surgeries left. She has also raised nearly $7,000 of her $8,000 goal. We encourage you to make a donation of any size. Doing so will also ensure that you receive future fund updates by email. Denise is an amazing and inspiring pit bull attack survivor, who also has three lovely children to care for. Several days ago, she sent in her attack story to us. We are publishing it in full below. The attack occurred on September 11, 1997 near Neillsville, Wisconsin.

I'm currently going through my 8th [surgery] directly related to the pit bull attack. I truly feel like I’m a fixer upper. Since I’ve been off work, I’ve had a lot of time to reflect on my life and this crazy event. I can honestly say that I have no regret for it happening to me. I’ve become the person I am because of it.

Recalling the events on September 11, 1997 no longer upset me, for I now finally realize after all of these years I’ve accepted and appreciate that this was a part of life I was meant to experience. And it truly has altered my life since.

Disclaimer this may be hard to read.

I was 14 years old, just starting my freshman year of high school. I wasn’t feeling well that morning and my mom let me stay home from school. It was just me and my brother Doug. Doug had two pit bulls, Rock and Spike, who I completely adored. Doug was always an authoritarian since he was my older brother. He strictly told me to stay in my room that day since I was sick. But at 14, I thought that I knew better than anyone what I needed. I wanted to get outside and sit under a lilac tree in my parents front yard. I was sure that would make me feel better. I slyly snuck out of the house without my big brother noticing. I grabbed some dog food on my way out to feed the boys -- that’s what everyone called Rock and Spike -- they were brothers and just a little over a year old.

I was nearly to the lilac bush when I heard something, my heart nearly skipped a beat thinking it was my brother coming to scold me. It was "the boys." I remember thinking, "Oh thank god it’s just the two of you." But they were running at full speed toward me. I instantly knew something was wrong. Instantly I felt pain in my left leg. One of the dogs had bitten my leg so hard I fell to the ground. I didn’t know at the time, but I fell face first into the grass, which is what had saved my life. If I would have fallen on my back, [pit bulls] have a natural instinct to attack the throat. I remember yelling for Doug until my voice was horse. I couldn’t really feel pain, but I knew there was one dog by my head and one my left arm. I put my hand on top of my head, and I remember my hand was covered in blood when I could see it.

Right after that a UPS truck pulled around the turn in my driveway. Almost instantaneously Doug came running out of the house. He yelled at the dogs who ran towards him. When I knew they were a safe distance, I ran to the UPS truck. The UPS man said, "I have to do something, if I don’t you will die." He somehow managed to drive the 7 miles to Neillsville. We met the ambulance at the main intersection in town. I said to him, "Thank you, I think you just saved my life." To this day I’m not sure if he heard me, all I could manage to get out was a whisper. My body was shaking like I was having a seizure. I was in severe shock from the blood loss. After I was taken into the ambulance, I said, "I’m so tired I want to sleep." The EMT very firmly said, "If you sleep you could die."

Upon arriving at the small rural hospital, everyone seemed panicked and I was too. That same year, Spirit, which is Flight for Life at St. Joseph’s hospital was started. The helicopter was there in minutes. I was loaded onto the chopper and flown to Marshfield. I never lost consciousness and can remember every detail, smell and all the beeping in the chopper. Once we arrived, I was taken directly into surgery. After around 9 hours, I awoke in the recovery room. I didn’t realize the extent of my injuries until much later. I was in and out the next few days in the pediatric ICU. I had so much love and support from my community, family and friends. I knew my entire head was bandaged and I couldn’t move my left arm. But I was determined -- a determination I still have to this day.

I was walking with assistance after four days. One week after I was taken for my first skin graft. The top layer of skin was removed from my right thigh and grafted to my head. The “donor” area was from my knee to my groin and it was just enough skin to cover the scalp that was gone. A few days later I went back to surgery to have a graft placed on my forehead. This skin was removed from my left arm because the color matched better to my natural skin tone. I had one more graft placed on my upper left arm where I had lost 3/4 of my biceps and a large portion of my triceps muscles. I healed relatively fast and was discharged from the hospital two weeks and four days after.

I remember the first time I saw my head. My surgeons were so happy with their work they gave me a mirror so I could see it. I had only one glance and threw the mirror across the room. At 14 my appearance was everything. I though I would never adjust.

My arm was in a sling for a total of almost two months. I was told that I would never regain full range of motion again. It took over a year of physical therapy and lots of blood sweat and tears but I have 100% range of motion in that arm. I now realize that if the events of that day didn’t happen exactly as it all did, I would not have survived. I’m forever thankful to that UPS man and my brother Doug! - Denise

Make a donation of any amount to Denise's Life Changing Surgery Fund at GoFundMe. 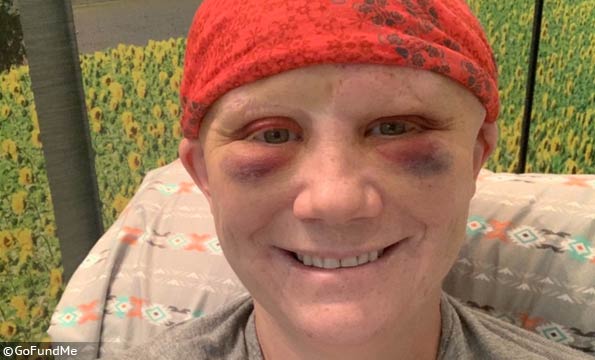