Last year, Responsible Citizens for Public Safety (RC4PS) held the first-ever event on National Pit Bull Victim Awareness Day at the Michigan state Capitol building in Lansing. The year's national awareness day is on October 26. Ann Marie Rogers, the founder of RC4PS, interviews Mia Johnson of National Pit Bull Victim Awareness and Colleen Lynn of DogsBite.org followed by a round table discussion in a pre-taped Zoom conference that is about 46 minutes long.

Johnson discusses National Pit Bull Victim Awareness Day that was first established in 2015, the related organization, and why it was started. Rogers and Lynn discuss legislative issues, such as the National Defense Authorization Act, which our nonprofit wrote about earlier in October. The round table discussion covers a number of areas, including how the act of the CDC defining a "mauling injury" (32:10), instead of using the "dog bite" vernacular would "change everything."

In 2019, a study examining 182 patients at Charleston Area Medical Center in West Virginia became the first study to define "mauling injuries," and used the term "mauling event" as well. "Mauling injuries were recorded when 3 or more bites occurred over 2 or more distinct regional anatomic areas, typically the craniofacial region, back, torso, and extremities." Among the top-biting breeds, pit bulls inflicted the most complex wounds (63%) and mauling injuries (71%).

Selected Findings: "The data showed that compared with other dog breeds, pit bull terriers inflicted more complex wounds, were often unprovoked, and went off property to attack ... The probability of a bite resulting in a complex wound was 4.4 times higher for pit bulls compared with the other top-biting breeds ... and the odds of an off-property attack by a pit bull was 2.7 times greater than that for all other breeds." - Dog-Bite Injuries to the Craniofacial Region: An Epidemiologic and Pattern-of-Injury Review at a Level 1 Trauma Center, March 2020 [2019 Nov 14, Epub]

"Mauling" vernacular was also used in the 2011 Texas study, "Mortality, Mauling, and Maiming by Vicious Dogs." That study concluded, "Attacks by pit bulls are associated with higher morbidity rates, higher hospital charges, and a higher risk of death than are attacks by other breeds of dogs." This vernacular describes the severe nature of the injuries, which is an important distinction for doctors treating these injuries and for those who respond to the scene of a severe dog attack.

First responders have emergency codes for what they are responding to. Today, police and fire respond to a "dog bite" or "animal bite" even if there are multiple victims and mauling injuries. Recall the "Judith incident" where a pit bull killed its owner (Devin White) and attacked three other family members. Four ambulances were required and a life-flight was in motion, but was later called off. They were not responding to a "dog bite." They were responding to a "mauling event."

From animal control departments, who fill out a "dog bite" report after a biting incident, to the hospital intake form listing "dog bite" after taking in Daxton (this 14-month old boy underwent a sustained pit bull mauling lasting up to 15 minutes), to numerous medical studies examining "dog bite" injuries, all the way up to the CDC, which obfuscates "dog bites" with mauling and maiming injuries and deaths, there is a daunting vernacular problem that can and should be rectified.

We stated in our 2014 Remedy document to the CDC that they "must make a vernacular distinction between mauling and maiming injuries and deaths (2%) by dogs and garden variety dog bites (93%). Call them what they are: 'mauling and maiming injuries.'" Doctors, coroners, first responding agencies and animal control departments, need not wait for permission from the CDC to change this vernacular. Even changing "dog bite" to "dog attack" would be an improvement.

Each designate different events that require a different response. A "dog bite" is a single victim event that may or may not require an emergency room visit (some victims are treated at the scene.) A "mauling event" is a single victim with multiple traumatic dog bite injuries. A rampage mauling, such as the Judith and Oviedo incidents, and the recent Seattle incident, often involves a single or multi-pit bull household, where the dog inflicts serious injuries to multiple victims.

Please leave ideas for topics and guests for a future Zoom conference in comments. We will forward them to Responsible Citizens for Public Safety, who will be organizing and hosting a future event (our role is post-conference video editing). We would certainly like to hear from doctors, first responders, animal control officers and family members of victims. There are also key civil and criminal liability issues (or a lack thereof) that attorneys or insurance professionals could address. 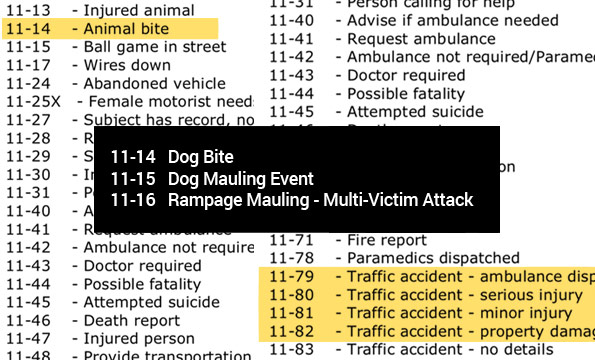 Injury severity and multi-victim attacks should be recognized in emergency response codes. When one has listened to as many fire/rescue audio log dispatch files responding to serious and fatal dog attacks as we have, it is clear that a "dog bite" response code is not enough.