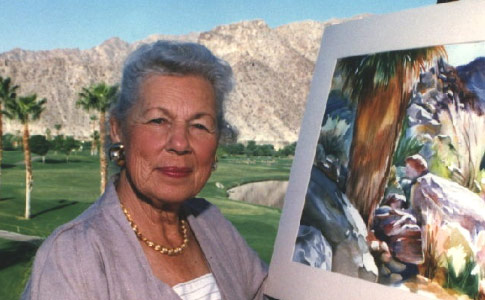 Watercolorist Elsie Grace seen standing next to one of her paintings.

Memorial Website
UPDATE 02/25/13: Family members have created a memorial website for Elsie Grace who was found in a hotel room mauled to death by her son's two pit bulls on February 8. The website is devoted to the celebration of Elsie's life and her accomplishments as a teacher and watercolor painter. The website also hosts the Official Elsie Grace Scholarship for the Arts Fund. The starting goal is to raise $33,000 -- $1,000 for each year Elsie taught at Copper Mountain College.

By establishing the scholarship fund, the family hopes to carry on Elsie's legacy of sharing the love and appreciation of art by providing financial aid to Copper Mountain College students on an annual basis in the future. If readers are unable to give to the scholarship fund, the family asks that you share the Elsie Grace Memorial website and its cause "on every social medical platform that you can." The family adds, "Let's show the power of social media for a great cause."

02/11/13: A Watercolor Artist
New information from The Press-Enterprise indicates that Elsie Grace was a nationally recognized watercolor artist who taught for 33 years at Copper Mountain College in Joshua Tree, California. Grace was a member of the La Quinta Arts Association, where she last exhibited as part of the 2004 Art Under the Umbrellas program. She also belonged to other national watercolor associations, according to Karen Ellis, a Palm Springs consultant who said she knew Grace.

After her retirement in 2004, Grace was commissioned by La Quinta Hotel and painted 230 watercolor views of the hotel's casitas. Thus far, authorities have released no information about the victim's son who was staying with her at the motel, along with two family pit bulls. Details about the background of the dogs have not been released either, such as if they were adopted from a shelter or rescue group or even the actual owner of the dogs, which we expect is her son.

Jeff Sheppard, the president and CEO1 of the Ramona Humane Society, which has the animal control contract for the City of Hemet, suggested the woman was dead before the attack and that the dogs licked her to try to wake her up. Sheppard makes no mention of the nature of the attack described by police as inflicting a "great deal of trauma." As typical, another tax-payer funded humane group is awash in pit bull apologia in the instant wake of a brutal fatal pit bull mauling.

The dogs were removed and are being held by the Ramona Humane Society, which oversees animals control in the city.

"They don't seem really aggressive," said Jeff Sheppard, president and CEO of the Humane Society. "These are family pets."

Sheppard said he did not know the specifics of the case, but it would not be unusual for pets to lick an owner who is unresponsive.

"An animal's instinct is to try and wake them up," he said.

It's possible that the woman may have died before the animals attacked her, he said. The Press-Enterprise, February 11, 2013

02/11/13: Killed in Motel Room
Hemet, CA - Authorities say a 91-year old woman discovered dead in her motel room was mauled to death by two pit bulls. Elsie Grace was found dead in her Motel 6 room in Hemet on Friday morning. "The victim had a great deal of trauma to her body," according to Hemet police Lt. Duane Wisehart. Apparently, Grace and her son were staying at the motel because they were in the process of relocating to Hemet. Her unnamed son was away at the time of the deadly attack. 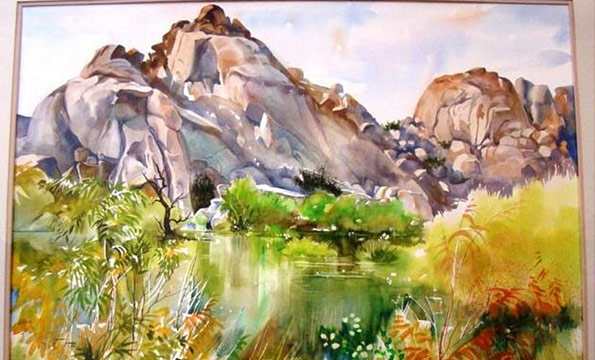 One of Elsie Grace's water color paintings from the Copper Mountain College's collection.

View the DogsBite.org Google Map: California Fatal Pit Bull Maulings.
1Grace was killed on Friday -- 3 days before the media reported it. Yet, CEO Jeff Sheppard claimed he "did not know the specifics of the case." That's three strikes: 1.) Sheppard ignored the police statement describing the victim's injuries 2.) Instead, he suggested the victim was dead prior to the attack and 3.) As president and CEO, Sheppard also denied knowing "specifics" about a fatal dog attack under his own jurisdiction after 3 days.