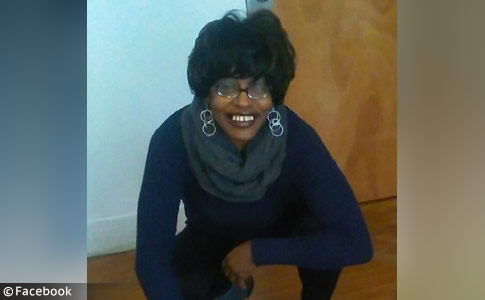 Alderman Explores Ideas
UPDATE 07/07/16: The two dogs that brutally attacked Jocelyn Winfrey on June 20, inflicting catastrophic injuries, were put down yesterday. Winfrey succumbed to her injuries and died on June 27. Yesterday also marked the first public statement by Yale University since the attack. Karen Peart, a spokeswoman for Yale, told the New Haven Register that at the time of the attack the owner of the dogs, Dr. Hamilton Hicks, was "on leave" from the school and continues to be.

For the record, Yale University made its first public statement about the incident 16 days after the gruesome attack and 9 days after Winfrey died. The attack was so horrific one witness told the New Haven Independent, still shaken days later, “All the flesh was ripped away from her calf. The artery was just hanging there." The witness added, "Half of her face was basically bitten off. She looked like she was dead." Before dying, Winfrey lost both eyes and underwent a leg amputation.

Coincidentally the Yale Daily News published its first story about the attack yesterday as well. They are not publishing any comments.1

Alderman Brian Wingate lives near Hicks' home. After hearing screams, he rushed to the scene to help. Witnessing the two dogs brutally maim Winfrey fundamentally altered Wingate, who has pledged to explore changes in the dog ordinance. During yesterday's Board of Alders meeting, Wingate's order to hold a public workshop relating to dog attacks, vicious dogs and ownership responsibilities was passed. Wingate said he wanted the meeting "sooner rather than later."

What can people like Wingate, and the other witnesses and first responders haunted by images of the attack, do at this time? What can the community do, which recoiled in shock, grief and outrage that such a horrific act could occur in their community with no repercussions? The act was an unprovoked savage attack by two pit bull-type dogs in Hicks' private fenced-in yard. He was right beside her and could not stop his dogs in a maiming scene matched only by "Hannibal Lecter."

In 2013, the Connecticut legislature passed a preemption bill barring municipalities from adopting breed-specific laws, including mandatory pit bull sterilization ordinances, which is the very least city officials can do to help protect public safety (Both of Hicks' dogs were male and at least one was unaltered.). Because the vicious attack occurred on private property, at least in this state, New Haven Police said no criminal charges applied. So, Dr. Hicks' has no criminal culpability.

The short answer to our question of "what can be done" after Winfrey's death is "not much." State legislators intended this result in 2013.

We greatly admire and respect Wingate and hope that his public meeting can lead to concrete results. These results could simply be an honest discussion about bull-baiting and fighting breeds to raise awareness of the gravely disfiguring injuries they inflict. Also how pit bulls and their close relatives "repeatedly" attack their victims and often refuse to stop even after great violence is inflicted upon them. This is why traumatic injuries and eventually death ensued in this case.

Still the soul searching continues. There is no one to hold criminally responsible for this deadly attack due to completely insufficient criminal laws. There are no adequate municipal tools to prevent similar attacks either. Hicks' can acquire two new "American bulldog-mixes" tomorrow and start this process all over again. A result state legislators also intended in 2013. At the very least, Winfrey's family should have civil recourse because Connecticut is a solid strict liability state.

06/27/16: Victim Did Not Survive
A 53-year old New Haven woman who suffered life-altering injuries after a violent attack by two pit bull-type dogs last week has died. Alderman Brian Wingate, who witnessed part of the grisly mauling, confirmed Jocelyn Winfrey's death Monday evening. On June 20, Winfrey and the dogs' owner, Dr. Hamilton Hicks, returned to his home. After they entered into his fenced-in yard, his two dogs brutally attacked Winfrey. Hicks attempted to intervene, but he could not stop his dogs.

Winfrey has been in a medically induced coma since the attack. On Monday, doctors removed her from life support. Doctors previously stated they did not know if she would survive and that her injuries were even worse than what Charla Nash suffered after being attacked by a chimpanzee. Police have consistently stated that both dogs involved in Winfrey's attack are pit bulls. However, Animal Control Officer Joseph Manganiello said the dogs are likely "American bulldog-mixes."

Dr. Hamilton Hicks, who is in residency at the Yale School of Medicine for psychiatry, was charged with a misdemeanor for possession of crack cocaine after the horrific attack. Hicks earned his undergraduate degree in psychology from Harvard University then attended medical school at the University of Miami in Miami-Dade County. That is where Hicks acquired the dogs, according to Manganiello, a county with a longstanding pit bull ban that refuses to recognize pit bull-mixes.

Manganiello also refused to allow any New Haven news reporters to view or photograph the dogs while they are under quarantine. When asked why the dogs butchered Winfrey and attacked their owner, Manganiello said, "I would believe they were protecting their own property.” It has already been reported that Winfrey was familiar with the dogs. These Miami-Dade County "American bulldog-mixes" attacked their Ivy League owner too. Hicks surrendered both dogs for euthanasia.

In Connecticut, as in many states, unless there is evidence that at least one of the dogs had been adjudicated as dangerous previously, there will be no criminal charges. The deadly pit "bulldog" mauling of Winfrey that occurred on the dog owner's property falls under the loathed loophole we refer to as, Defeated Prosecutor Syndrome. In other words, Dr. Hicks has zero culpability in her death and can acquire new pit bulls or Miami-Dade County "American bulldog-mixes" at any time.

06/23/16: Mauling Victim Identified
The victim has been identified as Jocelyn Winfrey, 53-years old, who remains in a medically induced coma in "extremely grave" condition after two pit bulls brutally attacked her Monday. Winfrey has lost both of her eyes, her right leg and may suffer an arm amputation as well. Doctors do not know if she will survive. Doctors previously stated that Winfrey's traumatic pit bull injuries are even worse than what Charla Nash endured after being attacked by a chimpanzee in 2009.

Winfrey was familiar with Hicks' two dogs. She also recently posted a photo to her Facebook page posing with her own pit bull, named Butter.

Police have arrested the owner of the dogs, Dr. Hamilton Hicks, 3-days after the vicious attack on charges of misdemeanor possession of crack cocaine. Hicks is currently in residency at the Yale School of Medicine for psychiatry. Hicks earned his psychology degree from Harvard University in 2001 then attended the University of Miami Leonard M. Miller School of Medicine. Police say they could add additional charges related to the violent pit bull mauling, especially if Winfrey dies.

06/22/16: Drug Possession Charge
The New Haven Independent reports that police have charged the 37-year old Harvard-trained doctor who owns the attacking dogs with illegally possessing crack cocaine at the time of the vicious mauling. The horrific pit bull attack, described by a witness as "Hannibal Lecter" style, occurred Monday night in the yard of a New Haven home. The doctor and a female friend had returned to his home and entered into his fenced-in yard when his pit bulls savagely attacked her.

“All the flesh was ripped away from her calf. The artery was just hanging there,” another witness recalled, still shaken days later. “Half of her face was basically bitten off. She looked like she was dead. She had to lose two gallons of blood, easy. The front sidewalk in front of the house was covered with blood.” - New Haven Independent

The female victim, identified only as Jocelyn, suffered the loss of both eyes, her right leg and doctors are trying to save one of her arms, according to Assistant Police Chief Anthony Campbell. "She lost both eyes. She has severe facial injuries. She’s in extremely critical condition," Campbell said Wednesday. Campbell also said that doctors are calling her injuries even worse than the ghastly chimpanzee attack of Charla Nash in 2009, who later underwent a full face transplant.

06/22/16: Horrific Pit Bull Attack
New Haven, CT - Last night we became aware of a nightmarish pit bull mauling at a home on Ella T Grasso Boulevard in New Haven. The owner of the two pit bulls, identified as Hamilton Hicks, entered his fenced-in property with a female friend. As soon as the two were inside, his dogs viciously attacked her. When Hicks intervened, his pit bulls attacked him as well. New Haven Alderman, Brian Wingate, is a neighbor of Hicks and described what he saw in media interviews.

My understanding is that she was a friend -- friends don't let friends get eaten up by their dogs. When I say, "I’ve never seen nothing like this in my life"...

It plays in my head, to be honest with you. Her thighs, her ankles, her arms, part of her face, her ears, were honestly mauled. I could see the bones on her body, in reference to her thighs, her legs, her ankles and her face. It was so bloody, along with mud from the dog prints. Also the owner was muddy from the dog prints ... It was unbelievable...

I've never seen nothing like this. I have only seen this on Hannibal Lecter, in the movies. This was really, really horrific. - Alderman Brian Wingate

The two dogs are described as a pit bull and American bulldog. Media and neighbors captured grainy photos of one of the dogs last night.

It is unknown if the woman, named Jocelyn, will survive. On the way to Yale-New Haven Hospital last night, she "coded twice" en route -- she underwent cardiac arrest twice. One commenter (gram14) on the New Haven Independent article last night stated in part, "This young woman lost both her ears, one eye (possibly the other) extreme facial, neck and throat injuries and severe extremity injuries. Due to throat injuries she was not able to be intubated when she coded twice."

Like most pit bull owners, Hicks could not stop his dogs while they viciously mauled Jocelyn leaving her unrecognizable and nearly dead. Hicks, who was in residency to help individuals with psychiatric disorders, frankly needs his own head examined. Recall the types of people who typically own pit bulls. The Independent is now running a vote on whether to ban pit bulls. This is a moot point. Connecticut passed a preemption bill in 2013 that bars cities from regulating pit bulls. 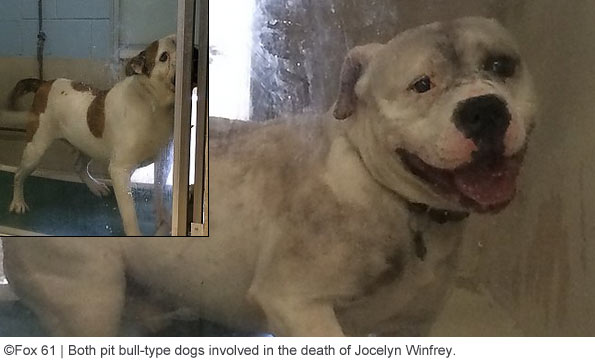 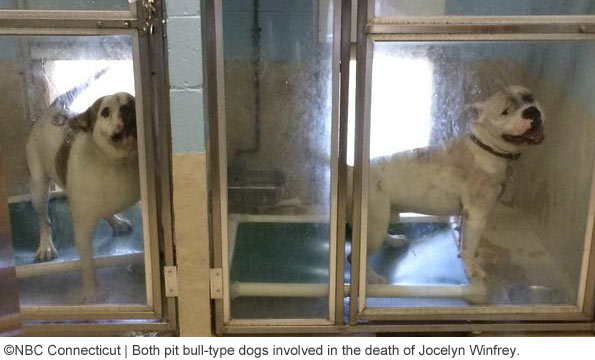 1You can certainly try leaving a comment on the Yale Daily News article, but we have multiple reports that none are appearing after submission.