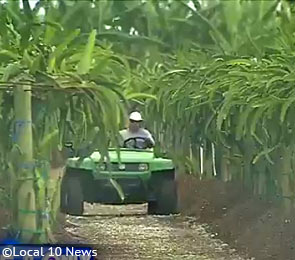 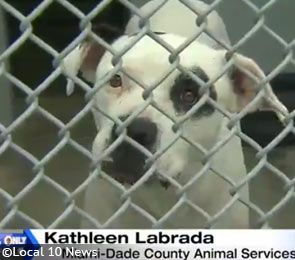 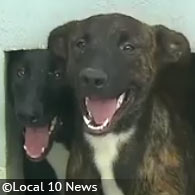 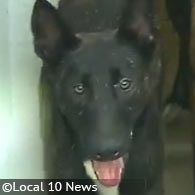 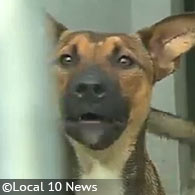 Some of the dogs that viciously attacked Manuel Mejia, 49, on April 23 in Miami-Dade County.

UPDATE 11/14/16: Today we submitted two public records request to learn more information about this case. We submitted a request for the police report from Miami-Dade County Police and the animal control report from Miami-Dade Animal Services. While local media did the initial fact-finding and gained the autopsy report, there were never any follow-ups. Questions also linger about the breed identification of the mother dog as the video did not show the dog's full body.

05/19/15: Attacking Dogs Finally Seized
Nearly one month after a man was mauled to death by a pack of dogs, Miami-Dade Animal Services (MDAS) finally seized the animals. During the transition in obtaining the dogs, one of the dogs threatened an officer. The officer shot and killed it. Thus, a total of 9 dogs were seized, including the pack's mother, described as an American bulldog by MDAS, indicating that the MDAS "breed labeling game" is back in action and again headed up by Kathleen Labrada.1

After the pit bull mauling death of Javon Dade Jr., Labrada and MDAS used at least four different breed labels for the other dogs involved in the vicious attack, none being a pit bull-mix, including: labrador-pit bull mix, American bulldog-Labrador mix, terrier-boxer mix and terrier-mix. As we have stated multiple times on this website, the first breed listed in a mix is the primary. In this case, this point is moot, except to note that MDAS is on record again claiming another "American bulldog."

We are sick to death of Labrada and MDAS (and Dan DeSousa-types) blatantly misleading the media and public about this issue when it is their duty to uphold the Miami-Dade pit bull ban -- thus ordered by the voting public in August 2012. But let's get back to why we are here. The vicious mauling of 49-year old Manuel Mejia on April 23 that went unreported to the public for nearly 3-weeks in Miami-Dade County. It only became public at all because local media investigated.

The Belgian malinois-bulldog mix offspring are 8-months old and are now being housed at an undisclosed location.2 Pamela Babineau, Mejia's girlfriend who witnessed the attack and called 911, told police three dogs instigated the attack and up to seven others joined in. This indicates that all 10 dogs may have been involved, including the mother dog, who is tough to rationally argue is not a pit bull-mix. It is unknown if the sire dog is in custody or if it was part of the attack.

We can only speculate as to the farm owner's motive of crossing the two breeds,3 but it seems he desired a fierce guarding breed. In the 1940s, pit bull lines were mixed into U.S. "war dog" lines, whose purpose was not to sniff out bombs, but to kill. Still, the primary function of a nonmilitary guarding breed is to bark to alert the owner when something is amiss; the primary function is not to deliver the death penalty, as animal behaviorist Alexandra Semyonova comments below:

Any guard dog (or group thereof) should function mostly to bark and indicate there's something weird going on, so the property owner can come and deal with the situation appropriately. Instant mauling / killing attack is not appropriate guarding. Even in Western nations that still have the death sentence, the intent is that this sentence is dealt out only for the most serious of crimes and only after careful consideration by a court of law. It cannot be that any citizen who owns one or more dogs is entitled to let the dogs deal out a death sentence for a misdemeanor, a minor crime or even no crime at all. - Alexandra Semyonova

Editorial note added June 14: This post was updated on June 14, 2016 to reflect that Manuel Mejia died on April 24, about six hours after he was airlifted to Kendall Regional Medical Center. We gained this knowledge by requesting an Autopsy Summary and Cause of Death report from the Miami-Dade County Medical Examiner's Office. As of today's date, no additional information has been reported by the media.

05/13/16: Clarifications & Autopsy
More clarifications have been made since last night. Miami-Dade Animal Services (MDAS) released a statement that in part said the dogs' owner is "fully cooperating" with authorities. However, his pack of dogs -- now said to be 11 of them -- have remained on the owner's property since the man's death nearly 3-weeks ago. Manuel Mejia was attacked by a group of these dogs on April 23. He died the next day. This information was not released to the public until May 12.

WPLG Local 10 obtained a copy of the Miami-Dade County Medical Examiner's autopsy report. Manuel Mejia, 49-years old, suffered serious bite injuries to his head, neck, chest, back and legs, fractured ribs and more. "The wounds were quite severe. They were all over his body," Darren Caprara said, the ME's director of operations. "So what we see is indicative of a very vicious attack." A witness told police that three dogs started the attack and up to seven more joined in.

The autopsy report was completed April 25, about a day after his death. County authorities knew early on that Mejia died of a dog mauling.

Caprara told Local 10 that his office only sees about one fatal dog mauling case a year.4
This means that in the last 11.5 years of tracking U.S. fatal dog bites, Miami-Dade County has seen about 11 cases. We only have 5 tracked in the county since 2005, 4 of which occurred since 2014. That is very troubling information then add to it that county authorities failed to acknowledge this man's death until reporters began investigating over 2-weeks after he was killed by these dogs.

Mejia and his girlfriend lived and worked on the dragon fruit farm owned by Reynaldo Torres, who also kept the dogs there. It is unclear if the attack occurred on the owner's property -- inside the farm's fenced area -- or if they got loose and attacked Mejia while he was off the owner's property.

NOTICE: WPLG Local 10 pulled this story sometime before 8:15 pm CST. Then reinstated it by 8:45 pm CST with changes. The new language adds that the victim died of his injuries just hours after the attack. The man's death went unreported to the public for nearly 3-weeks.

05/12/16: Man Dies After Dog Mauling
Homestead, FL - Nearly 3-weeks ago, a man was brutally mauled by a pack of dogs and county authorities released no information to the public. On April 23, Manuel Mejia was savagely attacked by four or more dogs owned by Reynaldo Torres, who owns a dragon fruit farm. Police say the owner has been uncooperative during the investigation. Miami-Dade Animal Services is working to gain a court order to have the 4 to 5 Belgian malinois-bulldog mixes removed from the home.5

Local 10 obtained the incident report showing that the victim's girlfriend, Pamela Babineau, called 911 to report that Mejia was being attacked by the dogs. "Mejia had multiple dog bites all over his body and open flesh wounds. A piece of skin was also missing from his left tricep area," states the report. He was airlifted to Kendall Regional Medical Center and died on an unknown date. Mejia was a caretaker at the dragon fruit farm. Police are now investigating the case as a homicide.

On Monday, we reported this attack to Local 10 (at that time his death was only "alleged") after a blogger on Examiner.com, a content farm, wrote about it.6 In the past, pit bull defender bloggers at that website have deliberately published outright lies (the ladder story) to advance rumors in social media and to confuse the public. The most notorious was Cindy Marabito.7 In February, the Examiner fired Marabito and unpublished her whole archive after she wrote a fake rescue story.

1In late December -- just 5-months ago -- we wrote an extensive post calling out Miami-Dade County Animal Services for their Interchangeable Breed Labels. We showed multiple examples of dogs available for adoption by MDAS that clearly should fall under the pit bull ban ordinance, but do not. We also explained in that post the actual ordinance language, how MDAS refuses to enforce the "pit bull-mix" portion of it and how our nonprofit tracks American bulldogs in our statistics. Currently at the MDAS adoption website, pit bulls and their mixes continue to be adopted out to the public under the "breed labeling game," which omits "pit bull" in the breed identification.
2Although these dogs are only 8-months old, the "bulk" indicative of an American bulldog is simply not present.
3Some Belgian malinios, despite their extensive use in law enforcement, also have genetic-based aggression issues ("glazing over" behaviors, episodic biting behaviors, and general loss of clarity). This has been studied and validated only in the Belgian malinois breed. An owner can have his dog tested to see if it has the genotype.
4Like everything about this case, this part is confusing too. The video states the ME's office sees dog mauling deaths about "one to two" times per year on average (about 16 deaths since 2005). The print version states "about one per year" (11 deaths since 2005).
5Strike area indicates that this information was also removed from the first edition of the news report.
6We do not link to any of the "pet" bloggers at the Examiner.
7Read the original "ladder story" after the pit bull mauling death of Darla Napora. Darla was 6-months pregnant at the time -- the deadly attack killed her baby too. Learn more about Cindy Marabito on the Craven Desires blog.

7 thoughts on “2016 Dog Bite Fatality: Man Mauled to Death by Pack of Dogs in Miami-Dade County”