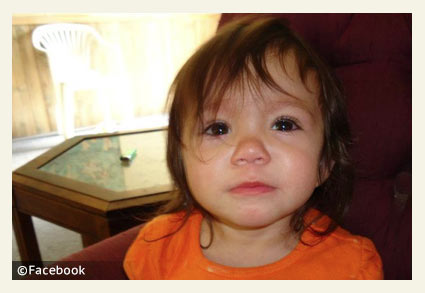 Mother 'Studying'
UPDATE 04/17/13: A mother charged with child cruelty in the dog mauling death of her daughter was in her bedroom studying for her GED diploma when the toddler was attacked by the family's pit bulls, according to her attorney. The child slipped into the backyard unnoticed through a doggie door and was attacked and killed by the animals. Yesterday, Summer Laminack was charged with second-degree cruelty to children, a felony punishable by up to 10 years in prison.

Georgia law defines second-degree child cruelty as an act of criminal negligence that causes a child excessive pain, either physical or mental. Two other adults were at the home at the time of the attack. Sheriff Clyde Smith said the child's grandmother was taking a nap; authorities have not released what the third adult was doing. District Attorney Tom Durden said, "It was a very horrific event that happened." Durden plans to let a grand jury decide if the case should go to trial.

04/16/13: Young Mother Charged
Charges have been filed in the death of a 21-month old toddler killed by a pack of family pit bulls in Ellabell last month. Summer Laminack, 18-years old, was charged with second-degree cruelty to children in the death of her daughter, Monica Laminack, according to a press release from the Bryan County Sheriff’s Department. Her attorney, Tom Edenfield of Savannah, surrendered Laminack on Tuesday to the sheriff's department. She was released on a $5,000 bond.

Laminack, along with two other adults and two young boys were at the home on March 27 when the family's pit bulls mauled the toddler to death. Bryan County Sheriff Clyde Smith said the adults were apparently napping at the time. At one point, the child's grandmother awakened and alerted family members to the attack, according to Smith. By the time any of the adults reached the child, she was already dead. Further action by the Bryan County Grand Jury is pending.

03/29/13: Criminal Charges Expected
Sheriff Clyde Smith tells WTOC there is no excuse for one of the adults to not be keeping a close eye on Monica, which is why second-degree felony child cruelty charges are being considered. The length of the attack is what investigators are now focusing on and why it took so long for family members to respond. Earlier, news reports said the 911 call was made at 6:36 pm. When EMS arrived, the little girl's body was already cold, indicating that she had been dead for a while.1

Detective Donnie Thomas said, "It wasn't just a one or two minute ordeal. It was not one or two bites and the dogs went on their own way." Smith and Thomas provided WTOC photos of Monica's body after the attack to show how severe and possibly prolonged the attack was. "The bite marks covered her entire body, the graphic photos even showing what appeared to be the tiny child's head nearly decapitated along with severe internal damage," reports the article.

"Apparently what happened is the child and the dogs were all in the house together and exited the house through the doggie door," Smith said ... "The dogs apparently live in the house also ...  and they all went outside and at some point they started attacking the child, mauled her and drug her all over the yard. They tore her clothes off and scattered her clothes all over a pretty large back yard." - Bryan County Sheriff Clyde Smith

Smith said that charges of child neglect would be the minimum that could be filed. Smith said he did not anticipate any charges being filed before the child's funeral. Smith only saw photographs of the young girl, but said that deputies and emergency personnel who responded to the scene were "very disturbed." Smith told reporters, "They said it was the worst they have seen. It was bad -- very bad." Bryan County Animal Control euthanized all seven pit bulls on the scene.

03/28/13: Child Victim Identified
The young child mauled to death by her family's seven pit bulls has been identified as Monica Laminack. Bryan County Sheriff Clyde Smith said that when EMS arrived, the child was already cold, indicating she had been dead for a while. Authorities continue to question how the child ended up in the backyard alone with the animals. Speculation ranges from her 12-year old brother leaving her in the backyard to the child accessing the dogs through the home's doggie door.

"All the dogs had access to the house, nine dogs in all. She habitually played with dogs, all of them." - Bryan County Sheriff Clyde Smith

The seven dogs involved in the attack, all pit bulls, were put down at the scene. Two other dogs (not pit bulls) living at the residence and not involved in the attack were spared. A separate article reports that Smith held a news conference Thursday morning. Smith confirmed that the child crawled through the doggie door, apparently she had done so in the past. Smith said that he would be shocked if no charges were filed. Five people were in the home at the time of the attack.

Smith added that four generations of the family lived at the home.

03/27/13: Toddler Killed by Pit Bulls
Bryan County, GA - Bryan County police authorities are investigating the death of a 21-month old girl who was mauled to death by a pack of seven pit bulls and pit bull-mix dogs Wednesday night. Police say the girl's grandmother was sleeping when she was awakened by a commotion in the yard. She looked out and saw the attack, but was unable to save the child. All of the pit bulls belonged to the child's family and have already been euthanized Bryan County Animal Control.

The child's identity has not yet been released.

View the DogsBite.org Google Map: Georgia Fatal Pit Bull Maulings.
1Authorities believe the child died at 6 pm, a half an hour before the 911 call.