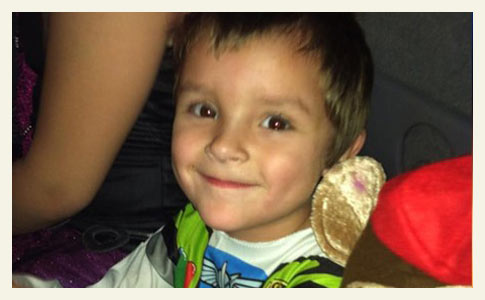 Sister Helped Boy
UPDATE 01/20/13: More information has been released about the 4-year old boy killed by a chained pit bull. Christian Gormanous was playing with his 9-year old sister, Trinity, in their backyard when he climbed over a chain link fence into his neighbor's yard. Though the dog was chained, it was still within reach of the boy. The animal attacked the boy. Trinity was able to get her brother away from the dog; brought him back over the fence then told her mother what happened.

At the time of incident, their mother was inside the home feeding her newborn baby. The mother's friends say that she was horrified by the attack and quickly called 911. Emergency responders airlifted the boy to a Houston hospital, but he did not survive his injuries. Close friends now surround the devastated family, less one child. No information was provided about the dog's owner or if the family knew the dog's owner. Animal control officers took custody of the pit bull.

He was a sweet little boy who liked to dress up as Spiderman,” said Debra Dreyer, a family friend whose grandson played at Christian’s house. Photographs show a child wearing a superhero costume for Halloween.
“He was a happy, very happy, very loved, sweet, little boy,” Dreyer said.
On Saturday afternoon, Christian Gormanous’ mother Janell — who’s been caring for a newborn baby — left her 4-year-old son in their backyard with his 9-year-old sister. The boy did what boys often do: He climbed the fence and walked into a neighbor’s yard.

Waiting in the neighbor’s backyard was a dangerous dog, a chained pit bull.

The dog attacked the boy who’d wandered into the yard, savagely biting him until his sister Trinity came to his rescue. - KHOU, January 20, 2013

01/20/13: Pit Bull Kills Boy
Montgomery County, TX - A young boy died after being attacked by a neighbor's pit bull on Saturday. Deputies with the Montgomery County Sheriff's Office were dispatched to a home in the 5700 block of Pinehurst involving a 4-year old boy that had been bitten by a pit bull. Investigators learned the boy had climbed a chain link fence into a neighbor's yard and was seriously injured by a chained pit bull. Christian Gormanous was airlifted to a Houston hospital where he later died.

In 2019, his mother Janell sang a tribute for him: "Singing to my precious son Christian"