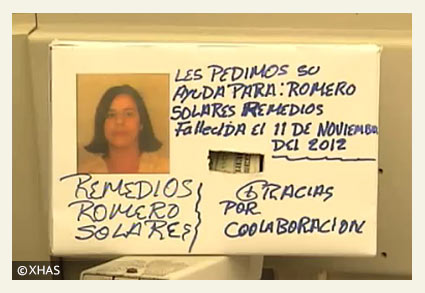 Contributions being taken for Remedios Romero-Solares.

Ongoing Investigation
UPDATE 12/07/12: Yesterday, The Fallbrook Village News released an update about the fatal dog mauling of Remedios Romero-Solares. Authorities have still not released the names of the owners of the dogs, but county records show that Jose Hernandez and Guillermina Hernandez are the owners of the property. Friends of the family, who asked to remain anonymous, said that the couple’s son Edgar Hernandez and his wife, Evelyn Kaiwi-Hernandez reside at the home.

Acquaintances of the couple told the Village News that the pair sold "dozens of puppies online for upwards of $2,500 per dog due to their potential size and power as adults." They added that many of the puppies were "aggressive and difficult to handle." Regarding the marijuana grow operation under investigation by the Sheriff's Dept.'s Narcotics Task Force, one investigator told the Village News that the couple who was living in the home "has not returned since the incident."

11/18/12: Victim Identified
The county medical examiner has identified the woman fatally mauled by one or more American bulldog-mixes in a Fallbrook backyard last Sunday. Remedios Romero-Solares, 30, was hired to clean the home, according to the San Diego County Medical Examiner. The woman was a resident of Fallbrook. Lt. Glenn Giannantonio with the Sheriff's Homicide Unit said the woman had spent the previous night at the house, but this was her first time cleaning the residence.

Remedios Romero-Solares, 30, was hired to clean the home in the 1300-block of Calle Tecolotlan, according to the San Diego County Medical Examiner. She was a resident of Fallbrook.

A relative who came to pick her up at around 5:15 p.m. Sunday found her dead in the backyard and called police. When authorities responded, they found eight large dogs running loose in the backyard where the woman's body was found. The residents were not home, and the garden hose was still running when they arrived, said Lt. Glenn Giannantonio with the Sheriff's Homicide Unit.

The medical examiner confirmed that Romero-Solares died from the dog bites and other blunt force injuries. Her death was an accident, the examiner stated.

The San Diego County Department of Animal Services took the dogs into custody and said they were a larger breed of dog called Olde English Bulldogge. Authorities did not have to use any force with the dogs.

Giannantonio said the woman had spent the previous night at the house, but this was her first time cleaning the house, and she was not very familiar to the dogs. - NBC San Diego, 11/17/2012

11/14/12: Death by Dog Bites
An autopsy conducted by the San Diego Medical Examiner's Office showed that the 30-year old woman died of "multiple penetrating, mauling, and blunt force injuries" inflicted by multiple dogs. There were no contributing conditions. Sheriff’s Lt. Glenn Giannantonio said the victim had been hired to clean the house while the owners were out of town. Deputies checked the house for possible other victims and discovered 24 marijuana plants being grown in a rear bedroom.

Meanwhile, The Fallbrook Village News is now calling the canines "American bulldogs." Over at San Diego Department of Animal Services, a department that now leads the United States in dog attacks resulting in human death, Lt. Dan DeSousa, who definitively stated the animals were "Olde English Bulldogges" on Friday is now stating that the owner was breeding the dogs for sale, crossing Olde English Bulldogges with American Bulldogs "to make them a little bigger."

11/13/12: Autopsy Pending
Sheriff's Detective Dan Laibach told The Fallbrook Village News Tuesday the victim, a 30-year old Hispanic woman, may have been trying to break up a dogfight when she was fatally injured by the animals. "At the scene, the Medical Examiner thought it looked like she had tried to break up a fight between dogs that were loose on the property when they turned on her," Laibach said. A garden hose left running led officials to believe she may have used it to break up a fight.

On scene investigators believe the victim bled out due to bites to her femoral artery. "After that, it appears that the dogs chewed on her," Laibach said. Autopsy results from the county Medical Examiner's Office are not yet available. The full name of the victim is also unavailable. The woman, who had been house-sitting on the 1300 block of Calle Tecolotan while the dog owners were away, was discovered by her cousin who had gone to "check on her welfare."

Both tax-funded employees should have been terminated months ago for their continuous propagation of pro-pit bull propaganda and pit bull "apologia" in the aftermath of these horrific deaths, along with county dog bite data showing the pit bull bite rate is nearly three times higher than the next closest breed. Not to mention October's "Dare to Bull-ieve" free pit bull adoption program launched and promoted by San Diego County Department of Animal Services.

According to their websites, neither the AKC or UKC formally recognize the "Olde English Bulldogge," a re-creation of the original bull baiting dog from 1100 to 1835.3 The blood sport of bull baiting was banned in Britain in 1835 due to public outcry.4,5

The dogs used to create the puppies for sale were EEE Giant's Kong (sire) and Bronya (dam), according to the breeding operation website run by the dogs' owners, Funnybulldogs.com.

1Five fatalities if one includes the San Diego pit bull that was taken across the border and promptly killed a 4-year old Tijuana girl back in August.
2Or American bulldogs.
3It is true the UKC recognizes the breed as some type of foundation stock(?), but this is hardly equivalent to being a recognized UKC dog breed.
4This is the second fatal dog attack this year in which a "compromised" animal control department has attempted to lay the blame of a human death upon a "rare" unrecognized dog breed with significant genetic links to the American pit bull terrier. The question isn't: Have the animal control profession and humane community turned on the American people? The question is: The animal control profession and humane community have turned on the American people and what in the hell are elected officials and the public going to do about it?
5So by all means, let's bring this blood sporting dog breed back into existence and "legitimize" it.