Apartment where Ronnel Brown was killed by his pit bull-cross dog, named Kilo.

Killed by Pit Bull-Cross
UPDATE 07/11/12: Ronnel Brown, 40-years old, was mauled to death by a dog the Cincinnati SPCA is calling an Alapaha blue-blood bulldog, one of several breeds achieved by crossing the "old southern white bulldog" and the American pit bull terrier.1 (See: Early bloodlines, note the Colby pit bull at the top right). Neither the AKC nor UKC kennel clubs recognize this dog breed.2 According to Brown's sister, the dog that killed her brother was also his "pride and joy."

A separate article shows the victim was undergoing dialysis when the attack occurred. Hamilton County Coroner Lakshmi Sammarco told FOX 19 news, "He was on dialysis and had a device in his forearm that during the scuffle with the dog, the dog bit him in the forearm and ripped a hole in that device, that led to a lot of blood loss." Sammarco also described the bite wounds as deep and that it is unknown how much of a role the damaged device played in Brown's death.

What is known is that when paramedics arrived at the victim's apartment the dog was "berserk, out-of-control." Responding medical personnel had to wait up to ten minutes for police to arrive and shoot the dog to death before entering the man's home. Brown was dead by the time they reached him. Two puppies were also found in the victim's apartment. It is unknown if they are offspring. FOX 19 reports that many people have contacted the SPCA hoping to adopt one.3

Investigators tell Local 12 that 40 year old Ronnel Brown called 9-1-1 himself. He told dispatchers that he had been attacked by his 80 pound American bulldog and he believed he was going to pass out. When paramedics arrived, they could not enter the apartment because the dog was "berserk, out-of-control," according to Harold Dates of the SPCA.

Police officers were called and they were forced to shoot the dog several times before it died. Paramedics found Brown inside the apartment, dead.

Officials with the SPCA tell Local 12 there were also two puppies in the apartment-a male and a female-which are now in the care of the SPCA. And they found bags of marijuana in the apartment. - Local 12, July 11, 2012

07/11/12: Man Killed by Own Dog
Cincinnati, OH - In a developing story, a 40-year old man was mauled to death early Wednesday by his pet pit bull-type dog. Investigators say the victim, Ronnel Brown, called 911 and told dispatchers that he had been attacked by his dog and thought he was going to pass out. When firefighters arrived, they could not enter the apartment because the animal was so vicious. Police officers shot and killed the dog. Paramedics then entered and found Brown dead inside.

Upon arrival, the fire department was unable to gain entry into the victim's apartment because of the dog, which was an American pit bull/bull mastiff mix. The Police Department responded and shot the dog dead. The SPCA arrived a few moments later.

Officers entered the apartment and located the victim. He has been identified as Ronnel Brown, 40. Police are calling his death accidental.
According to the Hamilton County coroner's office, the man was on dialysis and had an IV. He had been bitten several times and appears to have bled to death.

Mike Retzlaff, operation director at SPCA, says a necropsy will be performed on the dog. There were two puppies with the dog, but its unclear if they were related to the dog. - Fox 19, July 11, 2012 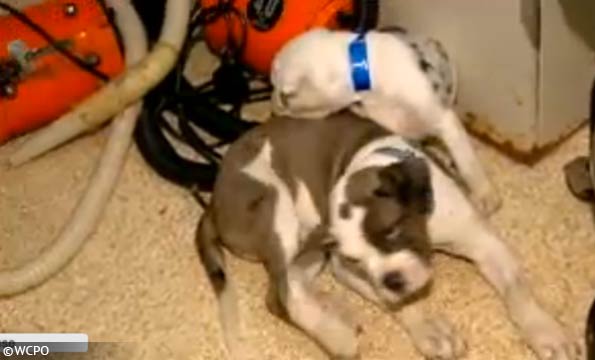 Two puppies were also discovered at the home of Ronnel Brown along with bags of marijuana.

View the DogsBite.org Google Map: Ohio Fatal Pit Bull Maulings.
1Under Ohio's definition of a pit bull, "a breed that is commonly known as a pit bull dog," (See: Ohio v. Anderson) the Alapaha blue-blood bulldog would be classified as a pit bull.
2Untrue with other pit bull-type dogs (fighting breeds) including the dogo argentino, presa canario and others.
3Because at the end of the day, "abnormal" dog owners want to raise the likely offspring of a man-killer.