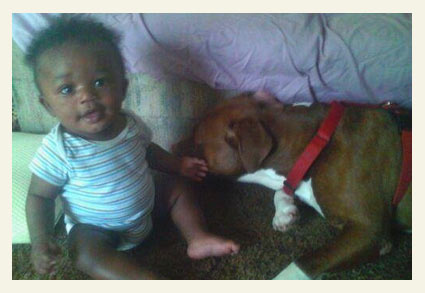 Tyzhel Latella McWilliams seen next to Zulu, which later killed the baby.

The Nanny Dog
UPDATE 06/19/12: The mother of an infant killed by a family pit bull last week called the baby's death a "tragic accident" and expressed disbelief that the very Nanny dog pit bull that seemed to "watch over the infant like a protective parent" would fatally bite her baby. "Never in my life I thought that would happen," the mother said in an interview Monday. The 27-year old mother moved into the single-story apartment 2 years ago with a girlfriend who owned three male pit bulls.

After Tyzhel was born, the mother said she had no worries about letting the dogs interact with her son. "They loved him from the beginning," she said. The fatal bite occurred as baby Tyzhel was playing in a room across from his mother. When he crawled into the bedroom, where his mother and roommate were, a pit bull named Zulu suddenly bit him on the head. "It just happened so quickly," she recalled. Sheriff's detectives continue to investigate the baby's mauling death.

Notably, all three male pit bulls, Blue and his two offspring Hercules and Zulu, were separated at the time of the fatal attack. One was fenced in the backyard and the other was in a crate in a different room. The owner of Zulu agreed to put the dog down; it was euthanized Tuesday. The other two pit bulls were released back to their owner. Outside of killing two cats that entered the fenced backyard, the animals had been friendly and well behaved, according to both women.

06/15/12: Details Still Remain Unclear
Authorities have not yet released the circumstances of the attack or how the baby boy was being supervised at the time. It is also unclear if the boy's mother or her roommate is the owner of the three pit bulls. A woman who works with a nonprofit that helps struggling women knows the mother and her son, baby Tyzhel. Anika Grothe, a case manager, said the mother has had "nothing but hard times, and here she is trying to redo her life and something like this happens."

A separate article by 10News.com reports that the same social agency is working with the Lemon Grove branch of U.S. Bank to set up a fund to help with funeral expenses and provide counseling for the mother. The agency also told 10News that it was "just one of the dogs that attacked the boy in his crib." Currently, all three male pit bulls are being held at Chula Vista Animal Care Facility. Sheriff's homicide officials continue to investigate the case; criminal charges may be pending.

06/15/12: Infant Killed by Pet Pit Bull(s)
Lemon Grove, CA - In a developing story, an 8-month old boy was mauled to death by up to three pit bulls Thursday. The attack happened just before 5 pm in Lemon Grove. When deputies arrived to the scene, a woman was holding the injured boy. By Thursday evening, officials confirmed the infant died after being transported to Rady Children's Hospital. Authorities also confirmed that animal control officers seized three pit bulls from the scene. More details are expected soon.