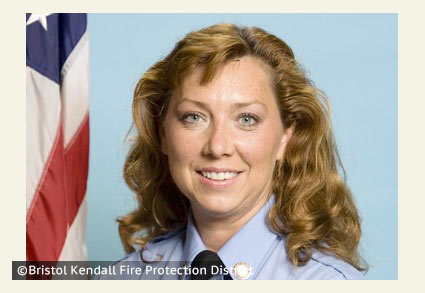 Dog New to Home
UPDATE 11/14/12: Police Lt. Pat Gengler said that an autopsy found that Brown died from dog bites to her neck from a 140 pound mastiff. She was discovered by her husband at the bottom of the basement stairs in their home. Gengler said the couple took in the mastiff about a week ago from a family member.1 He added that four animal control handlers were needed to contain the animal. The couple's two other dogs, a boxer and pit bull-mix were uninvolved in the attack.

Bristol Kendall Chief Michael Hitzemann noted that that the mastiff was having trouble getting along with one of the other dogs (which is perhaps why it was in the basement?) "I'm not sure we're ever going to find out," Hitzemann said, referring to what prompted the deadly attack. John Ciribassi, a veterinary behaviorist at Chicagoland Veterinary Behavior Consultants chimed in with typical garbage stating that fatal dog attacks are rare, "especially against adults."2

Adults Comprise Nearly Half of All Fatal Dog Attack Victims

11/14/12: Woman Killed by Own Dog
Big Rock, IL - A firefighter found dead in her home on Monday was killed by her dog. Kane County Sheriff’s police Lt. Pat Gengler said an autopsy completed Tuesday showed that Dawn Brown, 44, died from injuries inflicted by one of her dogs, a mastiff. At the time of the incident, Brown was home alone with the mastiff and her two other dogs, a boxer and a pit bull-mix. She was discovered by her husband about 4:15 pm in their home on the 400 block of Jefferson Street.

1To avoid the dog from being put down. Such a wise choice?
2Quoting "experts" like Ciribassi guarantees the propagation of false data, as his comment was clearly one of a personal belief with zero documentation supporting it.
3Video names dog breed a bullmastiff.