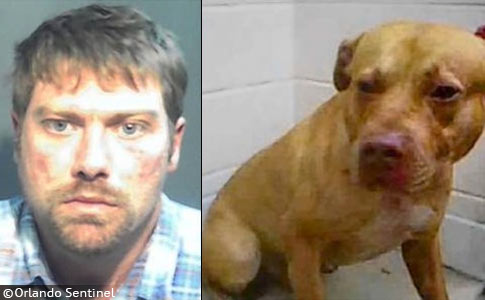 Two Amputations
UPDATE 02/16/12: A new arrest report reveals the victim's left leg was amputated below the knee, and her left arm below the elbow. The fleeing "dog expert," Ian Summers, now faces a felony burglary charge after authorities deemed him to be an unwelcome trespasser, not a resident, when he brought Robin Johnson to the home on February 10. The home's primary tenant told police that Summers moved out after a SWAT team raided the house for narcotics in November.

Investigators learned that the pit bull named Fiesty had been involved in at least three previous attacks. One involved injuring an Orlando Utilities Commission worker in 2010 and another that injured a 47-year old man at a Super Inn hotel last September. The third incident involved a severe bite to the 2-year old nephew of the dog's owner, Kevin King. Orange County Animal Services (OCAS) said the boy's mother declined to participate in dangerous dog proceedings.

Investigators discovered the dog had been involved in at least three attacks previously, including one in which an OUC worker was injured in 2010 and a second which injured a 47-year-old man at a Super Inn hotel in September.

A third involved the 2-year-old nephew of the dog’s owner, Kevin King. The dog bit the boy under his arm, “removing a large portion” of his skin, reports state.

02/10/12: Fleeing Man a "Dog Expert"
The Orlando Sentinel provides horrid new details about Florida's most recent catastrophic pit bull mauling. According to Orange County sheriff's deputies, 30-year old Ian Summers knew the pit bull named "Feisty" was dangerous, but brought the victim, Robin Johnson, to the home anyway. The pit bull allegedly belonged to another man who lived at the residence. Just after the two entered into the home, the dog brutally attacked Johnson and Summers fled the scene.

The arrest report says that Summers described himself as a "dog expert" and that he had brought the woman to the home for sex. According to the report, Summers told deputies that he was "scared to death" of the dog because of its violent history and that the dog had "bitten five people over the past month." Summers also told deputies, "When he attacked I did not want to be anywhere near that dog, he scares the death out of me, so I left and closed the door."1

A witness and another visitor at the home dragged Johnson to a bedroom for safety. The arriving deputy noted seeing the bloody drag marks, as well as human flesh in the living room. The victim was taken to Orlando Regional Medical Center with life-threatening injuries. Deputies concluded that Summers failed to protect the woman by securing a dog he knew was dangerous. The remaining question is if Summers will receive more charges for shutting the door and fleeing.

02/1/12: Three Amputations Expected
Orlando, FL - In a developing story, an Orlando woman could lose both legs and one arm after being bitten nearly to death by a pit bull. The woman was attacked at a house on 30th Street. A friend of the dog's owners, Ian Summers, brought the woman into the home, where the pit bull unleashed a brutal attack lasting nearly five minutes. Summers was arrested and charged with culpable negligence. Orange County Animal Services took custody of the offending pit bull.

Three victims who suffered catastrophic pit bull injury in the past year -- incurring two amputations or more -- did not survive, including Roy McSweeney of Putnam County, Florida.

1This was not just "culpable negligence" toward the victim and to ensure the attacking pit bull did not come after him, Summers exposed two other people to similar life-threatening injuries by shutting that door and fleeing.