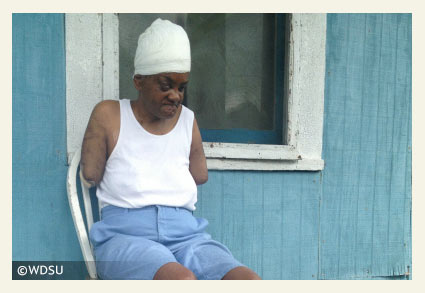 Victim After Mauling
UPDATE 05/31/13: Linda Henry who was nearly mauled to death by her own pit bulls in March, recently spoke to WDSU.com. Henry suffered the loss of both arms and disfiguring eye injury in the savage attack. The dogs also ripped most of her scalp from her skull. "The worst part," Henry said, "was my head." Henry underwent skin grafts this week to replace the skin that was ripped from her skull. A local company, Innovative Prosthetics, has donated new arms for Henry.

Councilman Glenn Green introduced a tougher breed-specific ordinance in the wake of Henry's attack. Green told WDSU: "No other dog is causing the problems that pit bulls are causing. We have to protect the public safety, (and) I'm going to do that." The new ordinance is to scheduled to go before Westwego City Council in July. Green previously said that Henry would testify at the public hearing. Henry, once a pit bull lover, now believes the breed should be banned.

04/10/13: Ordinance Drafted archived
Westwego city officials have drafted a new ordinance further targeting pit bulls. The action was driven by the savage pit bull mauling of Linda Henry. In March, three of four adult pit bulls that Linda had raised with her boyfriend since puppies ambushed her as she walked into her home.1 Henry suffered catastrophic pit bull injury, including the amputation of both arms, the loss of an eye and ear and devastating scalp injury -- the dogs ripped the scalp off the back of her head.

Westwego has had a pit bull ordinance since 2000 and city officials are strengthening it, proposing that owners be at least 21-years old and have at least $100,000 in liability insurance under their homeowners or rental policies. Also required under the proposed ordinance is mandatory microchipping and mandatory sterilization -- breeding new pit bulls will be banned. Police shot and killed all four adult pit bulls at the scene and seized a litter of eight pit bull puppies.

"They're going to be able to keep their pit bulls. They’re going to find it's a lot more expensive." -- Westwego City Councilman Glenn Green

The proposed ordinance will be reviewed more closely in July after newly elected City Council members take their seats. On Monday, Councilman Glen Green, who is leading the effort behind the proposed ordinance and visits Linda in the hospital, stated from the Westwego City Council podium: "I'm going to make sure your insurance company knows what's going on. I don't care if you don't like it. Unless you've been across the river to see Ms. Henry, you can't complain."2

03/18/13: Councilman Knows Victim archived
Linda Henry remained in critical condition at a New Orleans hospital Monday after suffering catastrophic pit bull injury. Westwego Councilman Glenn Green visited Henry at the hospital and said that he has seen improvement in her condition. Green said she now responds "when you talk to her" by wiggling her toes. Green said he's "had enough" after seeing Linda's devastating injuries and wants to make owning certain dog breeds more difficult inside Westwego city limits.

"I'm going to be a pain in their asses," Green said of owners of certain breeds. "That is the most vicious, brutal thing I've ever seen. I don't want to see that happen again to a citizen in Westwego."

Green said his plans are still in the works and he will seek support amongst his fellow City Council members to amend the city's current dog ordinance. Green added, "If they want to challenge it in court, so be it," Green said. "There are several breeds that I'm putting in there." In 2000, after the death of 2-year old Ramani Virgil, who was killed by his family's tethered pit bull, Westwego adopted an ordinance that spells out special confinement requirements for pit bulls.

Green said the severity of Linda's injuries will stay with him for a long time. "It happened in my district," Green said. "I have to step up to the plate. I mean this young woman, I've known her since she was a little girl. She is not just someone in my district. She is a friend, a family friend. I mean I can't even imagine living my entire life being vision impaired and having no arms." Linda lost an eye, ear and both arms in the attack. The pit bulls also tore off the back of her scalp.

03/14/13: Catastrophic Pit Bull Injury archived
Westwego, LA - Yesterday, the horrific pit bull attack that occurred in Westwego was added to the DogsBite.org Dog Bite Fatality Watch List. New details emerged today. Linda Henry, 54-years old, suffered catastrophic injury; two arm amputations and the loss of an eye and ear after a vicious attack by three pit bulls she had raised since puppies. The dogs also ripped the scalp off the back of her head. Westwego police arrived and shot and killed all of the adult pit bulls in her home.

As of Thursday, Henry remains in critical condition on life support at LSU Interim Hospital.3

Her boyfriend, Clarence Allen, who helped raise the dogs said, "I don't know why they did it … We had those dogs like kids in there. They never had a fight. I don't understand it." He said the two passed by each other just before the grisly attack. Allen was headed away to a corner store and Henry was on her way back home, "carrying her terrier dog."4 When Allen got to the store, his little cousin called him on the phone and said that police were at his home, shooting his dogs.

Police Chief Dwayne "Poncho" Munch said, "It's the worst dog bite I've ever seen in 25 years of police work." The couple's pit bulls evidently attacked Henry as she walked into the home. Munch said when police arrived, "They could hear the woman screaming in the house. They saw all three dogs biting her." Officers immediately shot two pit bulls that charged them as they entered the home then shot the third dog that was still mauling Henry. A fourth pit bull was also shot.

A neighbor named Alma saw Henry walk into the home and moments later heard Henry screaming, "Get off of me." Alma said that Henry was in awful shape when officers removed her from the home. "Lord, it was devastating. I've never seen something like that." She added that police carried the dogs' bodies out in garbage bags, one of which leaked blood onto the street in front of her home. Puppies taken from the home were carried out in a kennel, according to Alma.

Despite being hailed as the "most loyal" dog breed by their owners and advocates, pit bulls consistently maul and kill their owners. These attacks are on the rise as well. DogsBite.org noted in the 2011 fatality statistics, "Of the 8 total instances this year in which a family dog inflicted fatal injury to its primary caretaker, the dog's owner, 88% (7) involved pet pit bulls." The Occupy Maul Street blog keeps an ongoing log of these maulings and calls them Darwin attacks.

View the DogsBite.org Google Map: Louisiana Fatal Pit Bull Maulings.
1Linda only lived one block from Westwego City Hall.
2Also on Monday, four police officers, three paramedics and a code enforcement officer were given certificates and greeted by applause from those in the packed City Council chamber for helping save Henry.
3Jennifer Abbrecht, the communications director for the Louisiana SPCA, spouts "typical" distortions about pit bulls in The Advocate article while the victim is on life support after suffering catastrophic pit bull injury. According to Abbrecht's pathetic pit bull apologia, Westwego officers should not have shot the dogs to save the woman's life either. DogsBite.org hopes that Councilman Glenn Green is not swayed by Abbrecht's reprehensible distortions.
4There were 4 adult pit bulls in the home and a litter of 8 pit bull puppies along with this "terrier."