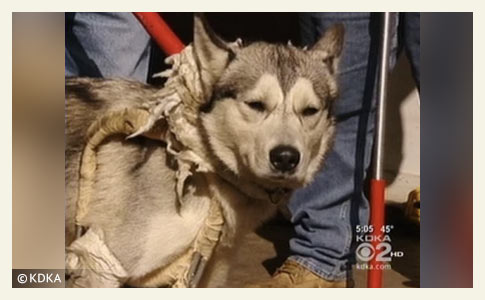 Baby Killer Gets Reprieve
UPDATE 03/08/12: In a not so unsurprising update, the husky named Nikko that mauled a 2-day old baby to death has been granted a temporary reprieve by Judge Borkowski. The dog will remain in custody in its current holding facility and be evaluated again after a magical 21-day period. Prior to killing the newborn, the dog killed the family cat and jumped a fence (or out of a window, depending upon news reports) in order to attack other animals in the neighborhood.1

"You know that people are passionate about these issues. I just don’t think they understand all the facts.

"They don’t understand how horrific the crime scene was, but if anybody has something they want to say, they want to communicate with the judge, I’m sure Judge Borkowski will be glad to hear what they have to say." (District Attorney Stephen Zappala)

02/23/12: Authorities Seize Husky
Days after a husky that killed a McKeesport infant was adopted to a new family, Allegheny County authorities seized the dog. Common Pleas Judge Edward Borkowski ordered police officials to confiscate the animal and to quarantine it, according to the latest Pittsburgh Tribune-Review article. The husky was released to the new family before the end of its 10-day rabies quarantine period by Ken Ferree, who contracts to provide animal control services for McKeesport.

Earlier today, the same newspaper released an article covering the story about the husky's new owner, William Uhring of Churchill, who paid $650 in kennel and veterinary fees for the dog's release. Uhring's neighbors were not too happy to learn that a dog responsible for a fatal human attack was living close by. "This is shocking to me," said Alan Hernandez, who lives across the street. "I can't believe someone adopted that dog. That dog should have been euthanized."

Nearby school officials were also concerned about the dog's adoption. Uhring's home is located on a street where schools and several bus stops are located. Assistant superintendent of the Woodland Hills School District, Alan Johnson, told the Tribune-Review that he plans to contact the district's solicitor to explore legal options. "This is an animal that we'd like to not have anywhere near any of our students, and now we're very concerned for their safety," Johnson said.

02/22/12: Officials Drop Citations
In another ethereal update, authorities dropped all summary offenses against the McKeesport mother pertaining to the death of her newborn -- including harboring a vicious dog and failure to vaccinate it against rabies. The cast-legged Nico was also adopted out to a new family today without even fulfilling a "standard protocol" 10-day quarantine, notably after an attack that resulted in a human death and after the mother was initially cited for failure to vaccinate.

02/22/12: Dog Killed Family Cat
WPXI reports that the husky blamed in the death of a 2-day McKeesport old boy had recently killed the family's cat and tried to jump out a window to get to other animals in the neighborhood. Also, a Pittsburgh Tribune-Review article offers new information about the two dogs that had been locked in the basement at the time of the fatal mauling: two pit bulls. Authorities are citing the 21-year old mother with summary offenses, including harboring a dangerous dog.

02/17/12: Images of Dog Released
In an "otherworldly" update, images of the dog involved in the fatal mauling of a 2-day old boy in McKeesport have been released. The images clearly show the "homemade" contraption created to support the dog's broken right foreleg. According to Dog Law Enforcement Officer Ken Ferree, "Apparently they rescued this dog from the Craigslist website from Murrysville about two-and-a-half weeks ago." Ferree correctly describes this adoption as a "ticking time bomb."

A separate article from the Pittsburgh Tribune-Review also interviewed Ferree, who is responsible for holding the confiscated husky and pit bull at White Oak Animal Safe Haven. He clarified the husky's broken leg -- the dog had been trying to jump a fence -- and said that the couple of the deceased child has already called and "demanded" to have the husky and pit bull returned to them.3 The article goes onto describe the couple as "animal collectors" who rescue dogs.

02/17/12: No Charges Expected
The Allegheny County District Attorney's Office said Friday its initial investigation has found that no crimes were committed in the dog mauling death of Howard Nicholson. Police removed the suspected culprit, an 18-month old husky named Niko, as well as a pit bull from the home on Thursday. Niko had only been living with the family for about a month, according to a neighbor. At the time of the attack, Niko was wearing a type of "homemade" cast due to a broken leg.

Animal Control in McKeesport said the baby's mother, Brandy Furlong, has been cited in the past for having an excessive number of dogs in her house -- the local ordinance limits each household to two dogs -- and was also cited for the condition of the dogs. At the time of the fatal mauling, Niko and the pit bull were loose in the house and the other two dogs were locked in the basement. Furlong's other two children, ages 6 and 3, were not home at the time of the incident.

02/16/12: Dog Kills 2-Day Old Baby
McKeesport, PA - In a developing story, a newborn died today after being bitten in the head by a family dog. Howard Nicholson, 2-days old, was airlifted to UPMC Children's Hospital in Lawrenceville, but did not survive his injuries. According to Police Chief Bryan Washowich, the boy's mother said that she was in another room when she heard the baby screaming. She returned to find the family's husky, which had a cast on one leg, standing over the injured baby.4

Animal Control officers removed the husky and a pit bull from the family's home. There was apparently another dog in the household as well. Authorities do not know what happened to that dog or if any other dogs in addition to the husky were involved in the attack. The 21-year old mother also has children ages 6 and 3. The father of the infant was not home at the time of the fatal incident. The medical examiner's office said that an autopsy is scheduled for Friday.

1Meanwhile, in other parts of lopsided Pennsylvania, dog bite victims are being asked to "verify" that the dog is "in good health" and free of rabies after a bite. Even if this involves a victim having to peer through the unknown dog owner's "dirty garage window."
2Threats by pit bull advocates upon the lives of city council members and activists who support pit bull laws are not uncommon. Fanatical "No-Kill" (Nikko-Nutters) are guilty of harnessing similar illegal tactics.
3Crossing over into the Twilight Zone.
4The WPXI video indicates that the family adopted the husky as recently as one month ago. In one month's time, that dog broke a leg and killed an infant; hardly a specimen for adoption into this home.