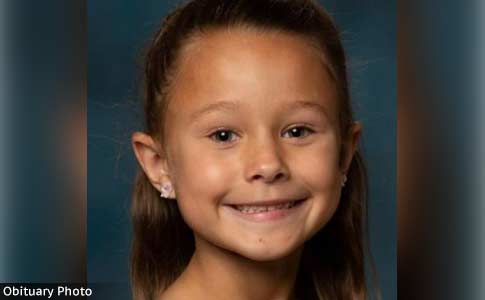 Olivia Floyd, 7, was killed by a relative's rottweiler in Augusta County, Virginia.

Extensive Criminal Charges
UPDATE 05/17/22: On May 13, 2022, multiple arrests were carried out by Waynesboro and Augusta County law enforcement officers in connection to the death of a 7-year old girl. Olivia Floyd was killed by a rottweiler while visiting her step-grandfather's home in January. One day after the deadly attack, police charged Stephen Christopher Kachmar with harboring a dangerous dog. Now Kachmar and his wife, the child's paternal grandmother, are facing murder charges.

Kachmar, 60, and Penny Lee Bashlor, 64, of Waynesboro, who co-owned the neutered rottweiler, "Ranger," are each being charged with five felony offenses: non-capital murder; involuntary manslaughter; child abuse and neglect; child cruelty and injuries; and vicious dog, serious injury. These offenses carry a potential sentence of up to 70 years. Ranger had allegedly bitten two people prior to killing Floyd. Given the charges, the dog likely has a more extensive history.

The child's parents are also being charged. Brooks Anthony Floyd, 39, and Alicia Rene Floyd, 37, both of Augusta County, are each being charged with child cruelty and injuries, a felony offense that carries a potential sentence of up to 5 years. Kachmar and Bashlor are currently being held without bond at Middle River Regional Jail. Brooks Floyd is also being held at Middle River Regional Jail. Alicia Floyd was released on a personal recognizance bond after the arrest.

The last time we saw more than two family members charged after a fatal dog attack was in 2012. Jazilyn Mesa, 15-months old, was killed by her father's pit bull in the backyard of her grandparent's home -- the dog dragged her under a ground-level trampoline while attacking her. The baby's paternal grandmother was charged with negligent child abuse resulting in death. The baby's grandfather and father were each charged with possession of a dangerous dog resulting in death.

WHSV reports the arrests of Kachmar, Bashlor and the child's parents, "follow an extensive investigation by the Waynesboro Police Department and testimony heard before a grand jury." A joint media release from police states the indictments came from a Special Grand Jury, which in Virginia is a specific grand jury that is empaneled to, "investigate any condition which tends to promote criminal activity in the community or by any governmental authority, agency or official."

We know that Penny Bashlor, RN, has been a Nursing Supervisor at the University of Virginia Medical Center since 1998. She may have retired in 2019. Brooks Floyd, PMHNP (Psychiatric- Mental Health Nurse Practitioner), the child's father, "has been in healthcare for over a decade, starting his career as a RN at the University of Virginia's Surgical Trauma Burn ICU," according to his online profile at Comprehensive Behavioral Health (getbacktoyou.com) in Staunton, Virginia. 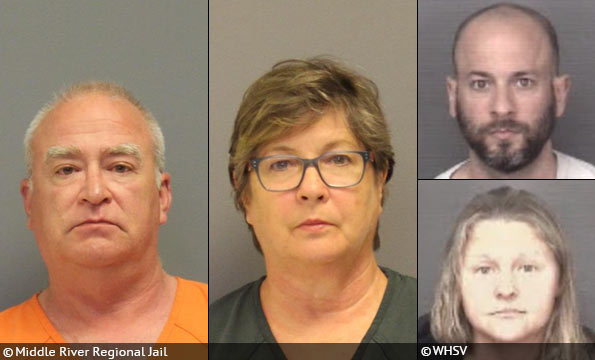 01/30/22: Pet Rottweiler Kills Child
Waynesboro, VA - A 7-year old girl is dead and an adult female injured after a pet rottweiler attacked them both -- a "domestic" dog attack indicates a family dog. Waynesboro officers were dispatched to a home in the 200 block of Parker Heights Road Saturday at about 2:30 pm. When they arrived, they found the child injured. She was taken to Augusta Health, where she died of the injuries she sustained in the attack. The adult female was treated for her injuries and released.

January 30, 2022 - The Waynesboro Police Department continues to investigate the death of a 7-year-old juvenile female of Augusta County, who was killed in a domestic dog attack on January 29, 2022.

Waynesboro Police officers responded to a residence in the 200 block of Parker Heights Road at about 2:26pm for a reported domestic dog attack. When officers arrived on scene, they discovered that a Rottweiler that belonged to the residence attacked the juvenile female. The juvenile female was then transported by ambulance to Augusta Health where she would later succumb to the injuries sustained in the attack. During this attack, an adult female also suffered injuries. She was treated for her injuries and released.

The rottweiler was subsequently seized by the Waynesboro Police Department for standard quarantine protocol at a local shelter.

This investigation continues. No further information will be released at this time.

Normally, there are three to five fatal dog maulings reported by the media during the month of January. Though, there was only one reported last year -- which was another unusual Covid year. We are currently reviewing two other potential dog mauling deaths this month that received no media coverage (Florida and California). Police did not issue media releases after either death. Since 2005, this is the first fatal dog mauling we have recorded in Augusta County, Virginia.

Waynesboro police announced Monday that a man was issued a summons after a dog killed a 7-year old girl over the weekend. Stephen Christopher Kachmar, 60, was charged with harboring a dangerous dog on Sunday, a day after the fatal attack. The state statute (§ 3.2-6540 – Dangerous Dog) states that an evidentiary hearing pursuant to the summons shall be held not more than 30 days from the issuance of the summons. Kachmar can also elect to have the dog euthanized.

Police did not identify the child Monday, but did confirm that a family member owns the rottweiler. A GoFundMe created by friends of the family to help pay for funeral costs identifies the child as Olivia Grace Floyd. The animal is currently being held in quarantine at a local shelter. One man walking in the neighborhood, who declined to be named, told the News Leader that he was aware of the dog and said that he'd been warned by a neighbor to keep his distance from the canine. 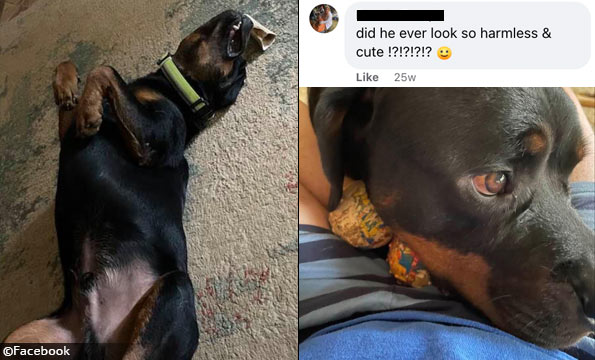 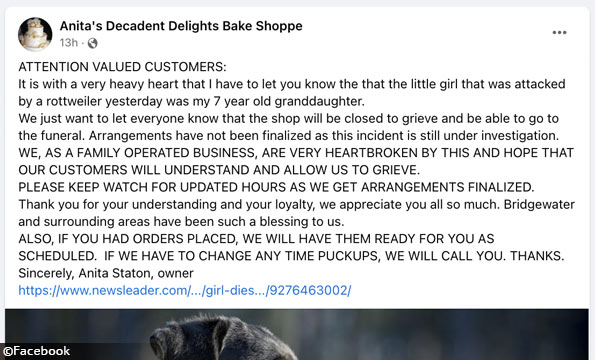 One of the child's grandmothers made an announcement to her customers on Facebook. Another relative commented on the police thread that the dog had bitten two other people in the past.

Baseline reporting requirements:
Law enforcement departments across the United States should release consistent "baseline" information to the media and the public after each fatal dog mauling, including these items.
Tweet
Share568
Tweet
Share568
Donate Now