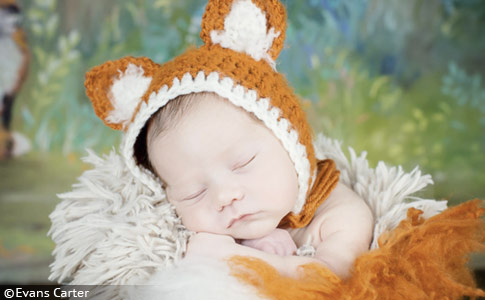 Suspected Dogs
UPDATE 03/13/19: Media reports have not named the child, the babysitter or the owner of the six pit bull-type rescue dogs. On Tuesday, the dog owner's husband deactivated his Facebook page -- a primary source for the images of the dogs.1 Due to this and other removals, we are now providing screenshots of their public Facebook pages showing their full names. Also, we believe we pinpointed the two attacking dogs based upon their pairing in the multi-pit bull household.

The dogs' owner, Jessica Hoffner, privatized or deleted the "collage" photograph that shows her half dozen pit bull-type rescue dogs.

The grandmother and babysitter, Julie Davis, started a "New Job at Personal Assistant to 7 Fur Grandogs," states an October 1, 2018, post on her Facebook page.2 In the comments sections, Davis posted a photo of each of the dogs, along with their names. Each dog is photographed separately, except the last two, Riley and Tasha. The multi-pit bull household was under a crate-and-rotate routine. The dog crates were separated into "multiple rooms" stated authorities.

Two dogs were in the yard together at the time of the fatal attack. This pairing was very likely the red-coated male pit bull-mix, described in media reports as a "chocolate lab-mix" and a white and brown female pit bull-mix, described in media reports as an American Staffordshire-mix -- a substitute name often used for a pit bull -- or an American bulldog-mix. Alachua County Animal Services appears to be behind this mislabeling effort after the dogs destroyed a 2-year old boy.

On March 10, a GoFundMe page was started to help the family with funeral expenses. 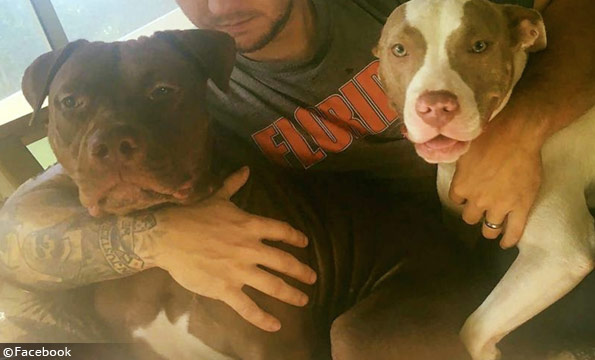 The two family "rescue" pit bull-mixes suspected in the fatal mauling of a 2-year old child.

03/09/19: All Six Dogs Were "Rescues"
Additional information has been released by Alachua County law enforcement, including clarification of family relationships, the routine nature of the child's grandmother caring for the six dogs, and that all of the dogs were "rescues." On Friday, about 10:30 am, two family dogs fatally attacked a 2-year old boy and left his grandmother with "traumatic" injuries at 20915 NW 210th Avenue, a mobile home property at the end of a dirt road off 210th Avenue near High Springs.

One of the grandmother's daughters lives at the home; the child was the son of a second daughter. The grandmother often tended to the dogs while her daughter was at work. Two of the dogs were let out into the yard. The child went out to play and the grandmother went inside. When she returned, "there were no dogs and no boy," Lt. Brett Rhodenizer said. She heard sounds from an outbuilding behind the home. This is where she found the two dogs attacking the toddler.

The dogs' owner told Ed Williams, director of Alachua County Animal Services, that she "adopted all of the dogs from rescue." He added, "They were all sterilized as best I could tell and were current with their vaccines." What Williams did not say is that all of her rescue dogs are pit bull-type dogs. The owner and her husband are pit bull "breed advocates" too, according to each of their Facebook pages. The attackers are described as a pit bull-mix and American bulldog-mix.3

One can only deduce the obvious from a montage image posted by the owner to her Facebook page in 2018: pit bulls, pit bull-mixes, a Dogo argentino-mix along with an American bulldog-mix, which can have docked tails. There are no "chocolate lab-mixes" in this collection, but there is a red-nosed pit bull-mix. The Gainesville Sun article describes very similar dogs as these, but no photographs of the dogs taken during the 10-day quarantine period have been released.

Finally, we address part of Williams' statement during the media briefing: "housed in large, clean crates in multiple rooms." This indicates a crate-and-rotate pit bull household, where the crated dogs cannot be kept in the same room. Thus, there were multiple dog-aggressive pit bulls in the home. The crate-and-rotate "system" reduces dog fights in a multi-pit bull household. Also note that only two dogs were let out in the yard at the same time, the very dogs that killed the boy.

03/08/19: Dogs Kill Toddler, Injure Adult
High Springs, FL - Two dogs attacked and killed a 2-year old boy and severely injured his grandmother, according to the Alachua County Sheriff's Office. The vicious attack occurred about 10:30 am at a home on Northwest 210th Avenue, between High Springs and Interstate 75. The toddler died of his injuries at the scene. The woman was transported to a hospital with traumatic injuries. Neither of the victims lived at the property, according to Lieutenant Brett Rhodenizer.

Rhodenizer said the two victims had gone to the home to let the dogs out, as apparently, the dogs' owner was away. While the child played in the backyard, the grandmother stepped away, reports WCJB. When she heard noises outside, she found the dogs attacking the child. The grandmother tried to fight off the dogs, suffering serious injuries during her effort, but she could not save the toddler. Rhodenizer called the double mauling, "an incredible tragedy for the family involved."

"Our investigation will ultimately determine the facts that lead up to the attack, but no answers will ever make up for the loss of a child," he said.

A spokesman for Alachua County Animal Services gave a media briefing this afternoon. The property had six dogs, all housed in "large, clean crates in multiple rooms." Only two of the six dogs were in the fenced backyard when the attack occurred. The agency seized all six dogs. Two will be euthanized; the others will be held until the investigation is over. Conflicting media reports say the dogs are a pit bull-mix and a "chocolate lab-mix" or the latter, an American bulldog-mix.

"Alachua County Animal Services was notified of this morning's attack at approximately 10:36 am. We had an officer in Alachua working another case at the time. She was immediately diverted to this call. I was en route back to our shelter at the time and immediately diverted to this call. Arriving on scene around 11:05 to assist our officers. Upon arrival, I tried to ascertain the facts and make sure that all the dogs on scene were properly contained, so that no one was in immediate danger. Around the time of our arrival, first responders were already transporting the child's grandmother to the hospital. At the request of law enforcement, we awaited the arrival of ASO detectives and the forensics unit before attempting removal of the dogs. We removed a total of six dogs from the residence at 20915 NW 2010th Avenue in High Springs. They were housed in large, clean crates in multiple rooms and all appeared healthy and in good body condition. It was later reported to us that only two of the six dogs were in the fenced backyard when the attack occurred. The owner has surrendered those dogs -- those two dogs -- to animal services. They will be held for the standard 10-day rabies quarantine period and they will be euthanized. The remaining four dogs are being held until the completion of the investigation…"

"The two [dogs] that were involved in the attack were surrendered to us. They will be held for 10-days rabies quarantine. That is for the safety and welfare of the grandmother, who was also attacked and injured in this incident. After the 10-days, they will be euthanized. The owner understood that when she surrendered them to us. She was very upset about it, as was she upset about what happened to the child as well. My understanding is the child was the homeowner's and dog owner's nephew." - Ed Williams, director of Alachua County Animal Services 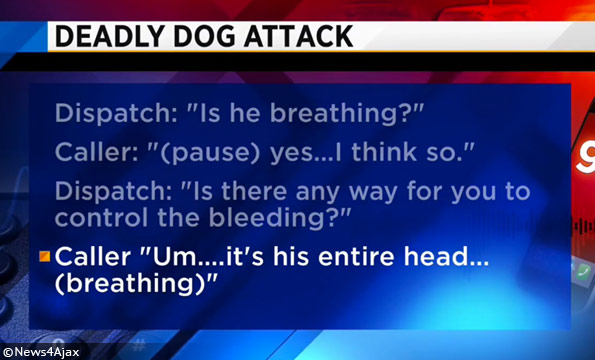 During the 911 call, the grandmother speaks to dispatch about the child's severe injuries.

View the DogsBite.org Google Map: Florida Fatal Pit Bull Maulings.
1By late Wednesday evening, he reactivated his Facebook page.
2Some time on or before March 17, the grandmother removed this post, "New Job at Personal Assistant to 7 Fur Grandogs," and deactivated her Facebook account. We replaced link with a screenshot.
3On Friday night, WCBJ reported, "All 6 dogs at the home have been taken into custody, the 2 dogs responsible for the attack have been confirmed by Animal Services as an American Staffordshire Terrier mix and an American Bulldog mix."

Baseline reporting requirements:
Law enforcement departments across the United States should release consistent "baseline" information to the media and the public after each fatal dog mauling, including these items.
Tweet
Share563
Tweet
Share563
Donate Now