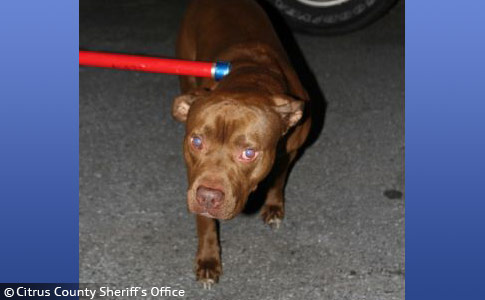 Pit Bull Kills Newborn
Dunnellon, FL - A 5-day old infant is dead after a family pit bull attacked the newborn while lying in her crib. The attack happened on West Ranchetta Street in Dunnellon at about 12:20 am Sunday. Citrus County Sheriff’s deputies arrived to a family member performing CPR on the newborn. A deputy proceeded to take over by performing chest compressions. The infant at that time was still slightly responsive, according to a report obtained by the Citrus County Chronicle Wednesday.

The newborn was airlifted to Bayfront Health Seven Rivers, where she was pronounced dead about 1:40 am Sunday, according to the report.

A female relative in the residence told deputies the pit bull leapt onto the bed, which was next to the bassinet where the infant was lying, and began attacking the infant while she was in a different room, states the report. Citrus County Sheriff’s spokeswoman Lindsay Blair said Wednesday that no criminal charges are expected to be filed in connection to her mauling death. Detectives are still waiting for the medical examiner to determine the official cause and manner of death of the baby.

The last recorded fatal dog mauling in Citrus County occurred in 2014. Christopher Camejo Jr., 2-years old, was killed by his grandfather's rottweilers. The boy was alone when the attack occurred, and was dead when emergency medical responders arrived. The boy was bitten over 200 times by the rottweilers. The boy's family had been staying at the grandfather's home when the dogs attacked. Both parents were later charged with negligence and third-degree murder.