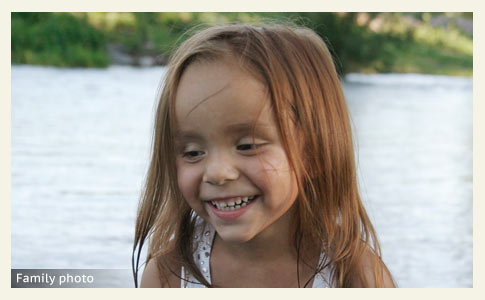 Jayla Rodriguez was killed by two or more dogs on the Pine River Indian Reservation.

Mother Pleads for Enforcement
UPDATE 11/22/14: After the tragic mauling death of 8-year old Jayla Rodriguez, Pine Ridge Indian Reservation residents are reeling in grief. Jayla had been sledding near the Crazy Horse housing complex when she was attacked by the dogs. Law enforcement officials still have not located the attacking dogs and continue to investigate the circumstances around the girl's death. One mother, however, is calling on Oglala Sioux Tribe officials to enforce the existing animal control ordinances.

Three years after Ellen Fills Pipe's son was attacked by pit bulls in 2003, Oglala Sioux Tribal Council passed Braedon's Law banning pit bulls, rottweilers, doberman pinschers and other vicious dogs from the reservation. The ordinance also allows law enforcement to confiscate and euthanize these dogs. Fills Pipe's son Braedon was 5-years old when he was viciously attacked by the dogs. He underwent 15 facial surgeries and still has nightmares of the attack today.

Fills Pipe is deeply saddened that the little girl's death could have been prevented. "Losing any life is so traumatizing," she said, "and to know it could have been prevented if we enforced Braedon's Law and enforced our animal code period." She said it was especially tragic because her son had been a mentor to the young girl who was killed by the dogs. "He talked about how angry he was that Braedon's Law wasn't being enforced and now his little best friend is gone," Fills Pipe said.

"If all it takes is to sit down and rewrite some laws and make sure they're being enforced ... We need to do it immediately." - Ellen Fills Pipe

In other painful news, tribal authorities are being pounded on by the media for rounding up non-compliant dogs and putting them down. The tribe is carrying out the tribal law that reads: "Any and all stray unlicensed animals not displaying a current rabies tag that pose a threat to the health and safety of persons residing on the Pine Ridge Reservation will be destroyed immediately." Authorities are being this aggressive because they have not located the dogs that killed the child.

The situation is extreme readers, not just because of the death of a child, but an extreme lack of resources. Not only is Pine Ridge (Shannon County) in the lowest bracket of income in America, it is the second poorest place in all of America, according to Census data (See: YouTube video of reservation). Slate published a short version of Aaron Huey's photo essay in 2011, whose effort to photograph poverty in America led him to Pine Ridge. The long version was shown at TEDxDU.

"The life-expectancy rate for men is between 46 and 48 years old. Roughly the same as Afghanistan and Somalia." - Aaron Huey

The investigation into the little girl's death is continuing. No one argues that the problem of loose unchecked dogs, in addition to abandoned and feral dogs, on the reservation is out of control. One man who lives in the Pine Ridge housing development said he locked up his dogs when he heard about the round up of stray dogs. Adrian Trueblood said he does not walk down the street without a stick in a nearby neighborhood that is filled with "more and meaner" dogs than his own area.1

There Are No Easy Answers

It appears that no one witnessed the attack. An earlier report stated that a supervising adult briefly left her alone. When that woman returned, she found the girl suffering fatal injuries from a dog attack. Another report said that authorities believed the dogs were mixed-breed, but it was unknown how many dogs were involved. What is true is that they may never find the culprit dogs or their owners. Yet another haunting reality for a people who have already suffered so much.

11/19/14: Dogs Kill Child on Reservation
Pine Ridge, SD - On the heels of a pack of dogs killing a 40-year old woman last week on the Wind River Indian Reservation in Wyoming, another fatal pack attack occurred on Tuesday evening on the Pine Ridge Indian Reservation in South Dakota. Police Chief Ron Duke said the little girl was attacked and killed about 5 pm while she was sledding near the Crazy Horse housing complex. Packs of dogs run uncontrolled in every district of the reservation, according to Duke.

KEVN reports that police are still trying to locate the pack of dogs. Acting Police Chief John Mousseau said his department is devoting every available resource to locate the pack so that the animals do not pose any further danger to the community. Mousseau said the FBI and Bureau of Indian Affairs are investigating. The Pine Ridge Indian Reservation is home to the Oglala Sioux Tribe and consists of 3.4 million square miles. It is the eighth largest reservation in the US.

The Pine Ridge Indian Reservation, like the Wind River Indian Reservation, is plagued with crime, violence, poverty, unemployment, dilapidated structures, drug and alcohol abuse and also packs of roaming dogs. As if life were not already brutal and relentless enough for residents on these reservations, they are getting torn to pieces by dogs too. Mousseau summed up the disparaging situation in Pine Ridge back in March and amazingly mustered up a small hint of hope too.2

It kind of feels like we’re not making a dent, like we’re just running uphill. But we are still running and trying our best.”- Police Chief John Mousseau

Later in the evening, the Argus Leader updated their post. Though police are still not releasing details of the fatal dog attack or the child's name, the article did note that Pine Ridge enacted legislation several years ago that banned several dangerous dog breeds from the reservation. The legislation, named Braeden's Law, was passed after a young boy was mauled by pit bulls. The tribe's new law bans pit bulls, rottweilers and doberman pinschers from the entire reservation.

The tribe passed legislation several years ago called Braeden's Law after a young boy was attacked by pit bulls, Mousseau said. The law banned Rottweilers, Doberman Pinschers and pit bulls completely from the reservation, he said, "and any time we come across a dog like that, law enforcement will take and destroy the dog." - Argus Leader, November 19, 2014

Witnesses interviewed Tuesday were unsure of the breeds involved in the deadly attack or even how many dogs were involved, according to Mousseau. The little girl was a third grader at Red Cloud Elementary. "It's been definitely difficult," said Chris Ives, interim director of communications for the Red Cloud system. Counselors from multiple school systems and Catholic Social Services all came to Red Cloud Elementary Wednesday to help grieving students and staff, Ives said.

1After doing more web searches, researching this case further, we came upon Adrian Trueblood's dogs -- he locked them up in a car during the round up (see slide #2).
2There was much more hopeful news about the Wind River Reservation recently.