DogsBite.org - During the first 5-months of the 2016 legislative season, state preemption bills barring local governments from enacting breed-specific legislation were introduced in eight states. As of May 13, six states have rejected these bills and two remain pending. So far in 2016, this is a 100% success rate for municipalities retaining local control. These states are: Missouri, Kentucky, Washington, Georgia, West Virginia and Idaho. Bills in North Carolina and Michigan are pending.

Our 4.5-year trend document shows that since 2012 -- the start of Wave II preemption legislation -- lawmakers in 13 states have rejected 76% (19) of these bills. Over the last 2.5-years (2014 to present), the rejection rate increased to 90%. The chief instigators of these bills, Utah-based fighting dog advocates, Best Friends Animal Society, and dog breeder interests, have a 0% success rate since April 2014, when grassroots efforts truly began organizing to fight them.

In this year's legislative update, we offer brief highlights on all six states starting with Missouri. Next we review Kentucky, emphasizing the first time a fiscal impact estimate has ever been added to an anti-BSL bill. Committees in Washington and Georgia each produced a curious "substitute" bill. In West Virginia and Idaho, both bills had short lives. In 2017, we expect these same preemption bills to return to these four states: Missouri, Kentucky, Washington and West Virginia.

Of all of the states facing preemption legislation this year, Missouri was by far the most at risk. Over 80 jurisdictions in Missouri have breed-specific ordinances. The passage of HB 1811, preventing local governments from regulating pit bulls, including cities under home rule authority, would have been a horrible loss for these cities. Many people and pets currently protected from violent pit bull attacks would have seen this protection instantly vanish upon the bill's passage.

In 2014, a hotly contested preemption bill failed in Missouri. That bill was sponsored by State Rep. Ron Hicks and backed by Utah-based Best Friends. Hicks introduced this same bill in 2016. HB 1811 passed the House on April 14, but soon began to unwind in the Senate. On April 21, it was assigned to the Senate Agriculture committee. It was rendered dead on April 27 after chairman Sen. Munzlinger cancelled the bill's hearing, causing the bill's backers to have a clinical meltdown.

"Just talked to Munzlinger's office staff in person, They told us as of now HB 1811 has been PULLED. The reasoning is there has been too many phone calls and emails OPPOSING THE BILL." - STOP breed specific legislation in Missouri, 04/27/16

The meltdown was an implosion of rage and confusion, causing the bill's local supporters to flood Munzlinger's office with demands to reschedule the hearing. So much so that Munzlinger even posted to their Facebook page a confusing alternative that is not a valid way to challenge BSL. Section 67.140 of the revised statutes only pertains to the legal "relationship between persons and domestic animals." That relationship is defined as an "owner" not a "guardian," for instance.

"Robo emails are not recommended. They just get deleted ... Best Friends is one of the organizations that was pushing for the bill to go to Sen. Munzlinger in the first place. They hired a couple of the lobbyists that got us into this mess." - STOP breed specific legislation in Missouri, 04/29/16

The rage and confusion only grew over the next 48-hours as Best Friends had previously told local supporters not to contact Senate committee members. Then, in desperation, Best Friends turned around and issued one of their infamous "robo emails" on the 29th that local backers had warned against. Finally on May 2, locals mistakenly believed the hearing for HB 1811 had been rescheduled by the chairman for May 4, only to learn later this was a clerical error -- the bill truly died on April 27.

After HB 1811 passed the House in mid-April, the media began publicizing the legislation. We usually see this as favorable, as this alerts mayors, city council members and constituents to the bill. A week before the hearing was abruptly cancelled, killing the bill, the mayors of Florissant, Palmyra and Fenton all spoke out forcibly against HB 1811. Certainly their opposition was communicated to Senate committee members. Bravo to mayors for mobilizing to defeat the bill!

In Kentucky, SB 116 was introduced -- the same aggressive preemption bill that was introduced in 2015 and failed. In a "Kentucky style" rerouting this year, SB 116 was "recommitted" to the Senate State and Local Government committee, instead of going to the Senate floor for a vote and died on February 18. Best Friends managed to get the same bill introduced in the House chamber as HB 510 about 8 days later. That bill died on March 3 in the House Local Government committee.

Notice the committees the bills died in. The Kentucky municipal associations are robust and fight hard to preserve local control and ensure that home rule remains hearty. In a first-ever fiscal impact statement for this type of preemption bill, the Kentucky Association of Counties, Kentucky League of Cities and the County Judge Executive Association, provided data for a powerful one for SB 116. Again, a "fiscal impact" estimate has never before appeared on an anti-BSL bill.

It is important to also point out just how aggressive the preemption bills in Kentucky were. Preempting home rule jurisdictions was not nearly enough for Best Friends in this case. Pay close attention to the words "regulation or policy," which presumably would apply to any breed-specific shelter policy and any breed-specific housing policy ("housing authority" pet policies being one area) operated or owned by any of the local governments described in the bills' language.

Senate Bill 116 - Kentucky
(1) For the purposes of this section:

(a) "Dog" means any breed of canis lupus familiaris; and

This year, an irregular set of events happened in Washington and Georgia. Preemption bills in both states, carried over from 2015, had been languishing in House committees then in 2016 mutated into unusal "substitute" bills. In Washington, HB 1018, morphed into a bill that would allow a dog to be exempt from breed-based regulations if the dog passed an AKC Good Citizen test, a test that would need to be performed every two years to maintain this exemption.

Take a moment to consider this "spin" language and how in conflict it is with the Supreme Court of Washington's decision in American Dog Owners Ass'n v. Yakima (1989), which upheld the constitutionality of Yakima's pit bull ban. This fallacious language was not based on any court proceeding that requires a formal evidentiary process; it was based on oral storytelling by Rep. Appleton whose only "evidence" was incorrectly citing a SCOTUS decision from 1920.

Sec. 1. (1) A number of local jurisdictions have enacted ordinances prohibiting or placing additional restrictions on specific breeds of dogs. While the legislature recognizes that local jurisdictions have a valid public safety interest in protecting citizens from dog attacks, the legislature finds that a dog's breed is not inherently indicative of whether or not a dog is dangerous and that the criteria for determining whether or not a dog is dangerous or potentially dangerous should be focused on the dog's behavior.
(2) The legislature further finds that breed-specific ordinances fail to address the factors that cause dogs to become aggressive and place an undue hardship on responsible dog owners who provide proper socialization and training. The legislature intends to encourage local jurisdictions to more effectively and fairly control dangerous dogs and enhance public safety by focusing on dogs' behavior rather than their breeds.

Washington advocates, there was no reason to put this section in the bill, except to add the flawed "opinion" of a few legislators and to create state statute amounting to a Pit Bull Bill of Rights. When we say this language will "poison" Washington's exceptional dog law chapter, we mean it.

What happened in Georgia this year borders on mysterious. SB 184 began as a straightforward anti-BSL bill in 2015 that passed the Senate chamber and landed in the House Governmental Affairs committee. In 2016, SB 184 emerged from that committee as a substitute with no anti-BSL clause. The bill instead carved out "entitlements" to AKC, UKC hunting dog groups, classifying them as  "hunting dogs" and able to receive the same lower licensing fees as sterilized dogs.

Essentially, any dog used for hunting purposes would be exempt from any city our county differential licensing ordinances. Such ordinances require the owners of unsterilized dogs to pay higher licensing and registration fees as an incentive to spay and neuter with the goal of lowering unwanted breedings. SB 184 was a win for the hunting dog lobby and a loss for struggling animal control departments across Georgia. Governor Nathan Deal signed the bill into law on April 26.

How the Georgia anti-BSL bill morphed into completely different legislation that carved out "entitlements" for hunting dogs is unknown.

In West Virginia, HB 4508 was introduced on February 11 and died two weeks later, failing to make the House crossover deadline. The bill barred cities and counties from enacting breed-specific regulations. Backers of the bill, the West Virginia League of Humane Voters, promised to be back next year perpetuating more distortions and untruths about pit bulls. Currently, only a handful of jurisdictions in the state have breed-based ordinances to protect citizens and their pets.

The shortest-lived anti-BSL bill this year came out of Idaho. HB 470, sponsored by Rep. Mike Moyle, survived just 7-days before being killed. HB 470 overhauled portions of the state vicious dog law and included an anti-BSL clause buried within (Section: 25-2812). A journalist at The Spokesman-Review caught the implication immediately causing a flurry of debate. The bill was quickly resurrected as HB 525 without the clause. It passed both chambers and became law.

What happened in Idaho shows how an anti-BSL clause can frustrate and even kill a long overdue overhaul of a state's vicious dog law. In this case, the bill provided stronger protections for citizens, stiffer fines for the owners of loose dogs and a new designation of "At-Risk Dogs" (a step below the "Dangerous Dog" designation) when bites do not cause serious injury. Legislators in Idaho recognized this and omitted the anti-BSL clause that otherwise may have stalled or killed the bill.

Legislators in six out of eight states during the 2016 legislative season rejected preemption bills barring local pit bull ordinances. Of these states, Washington and Georgia lawmakers rejected these bills 3-years in a row, Kentucky 2-years in a row and Missouri, twice since 2014. The two pending bills in 2016 are North Carolina, whose session ends in July and Michigan, whose session ends in December. The last time an anti-BSL bill passed in a state was March 2014.

As mentioned earlier, preemption bills will be returning in at least four states in 2017. We also expect the 2015 anti-BSL bill to be revived in Montana next year, once again pushed by Utah-based Best Friends. We know that advocates get tired of this incessant broken record, but each year we learn more about the legislative process and how to better fight these bills. Your hard work is reflected in the map below! Thank you for your dedication, and pace yourself! 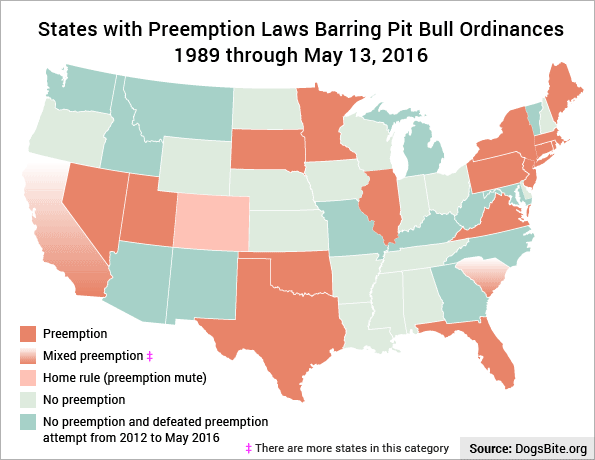