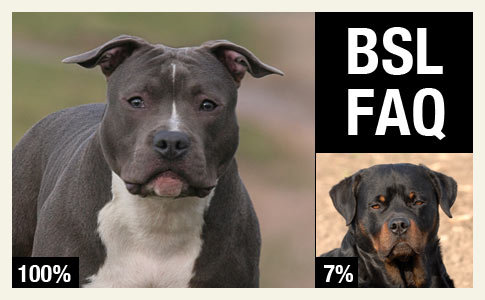 An analysis of 860 cities with breed-specific laws showed that pit bulls were named in 100% of these ordinances, followed in distant second by rottweilers, named in just 7%.

Breed-Specific Legislation FAQ
DogsBite.org - Today we release our Breed-Specific Legislation FAQ that will empower advocates and city officials who support breed-specific laws. The FAQ drills down into the effectiveness of these ordinances, which breeds are involved and the three most common types of ordinances. The FAQ provides examples for each ordinance type, jurisdictions that achieved strong results and highlights the public support for pit bull ban ordinances by reviewing two recent election results.

The FAQ answers many questions, but we call to attention the "alleged" high cost of enforcing BSL. This part of the FAQ destroys the online BSL calculator created by former tobacco economist John Dunham and hawked by Utah-based fighting dog advocates Best Friends Animal Society. The sham BSL calculator was funded by the National Canine Research Council,1 a subsidiary of Animal Farm Foundation. Both are owned and operated by extreme pit bull promoter Jane Berkey.

The FAQ shows that the sham BSL calculator's estimate to enforce a county pit bull ban is an exaggeration by almost two orders of magnitude.

Back in February 2012, when Miami-Dade County was debating the issue of placing the pit bull ban on the primary ballot, pit bull defender Dalia Caines testified to committee members that, "taxpayers paid $3 million annually to enforce the ban on pit bulls." In response, Animal Services director Alex Munoz told committee members that $3 million was more than the department's entire budget for enforcement and that pit bulls accounted for 2% of the enforcement costs.

The FAQ breaks this down for readers by examining the 2011-2012 Miami-Dade County Animal Services budget.2 The total budget for the department during the period was $9.36 million. The total budget for Code Enforcement was $2.3 million. Director Munoz stated that pit bulls accounted for 2% of total enforcement costs, which equates to just over $46,000. The BSL calculator, which claimed the ban cost taxpayers $3 million, is an exaggeration by almost two orders of magnitude.

Dunham is known for the "calculators" he designs for his clients -- primarily lobbyists, industry trade associations and at least one candidate.3 The sham BSL calculator exaggerated the actual cost by a whopping factor of 65. Dunham's calculators and "economic research" studies have been scrutinized by the media before, even his feral cat calculator was (which vanished in 2012),4 but the media has never questioned the sham BSL calculator. They just print its spurious results.5

We urgently call on advocates to spread this information and to criticize publications and reporters who blindly print the calculator's bogus results.

Other Sections of the BSL FAQ

The breed-specific legislation FAQ discusses the history of BSL and how long these laws have been targeting fighting dogs -- since the late 1800s. The FAQ provides evidence of "bulldog" ordinances from 1896 to 1912, along with an 1897 woodcut illustration published in The San Francisco Call of a policeman "strangling a savage bulldog into releasing his hold" of a child. The FAQ reminds readers that attacks by pit bulls back then were just as horrific as they are now.

The FAQ discusses the constitutionality of breed-specific laws and why well-written ordinances have a 100% success rate when under constitutional scrutiny. The FAQ also dismantles several untruths about constitutional issues, often voiced by oppositional groups. Lastly, the BSL FAQ touches on state-preemption anti-BSL laws, as we first examined in our April report, and the primary driving forces behind them -- Best Friends Animal Society and dog breeder interests.

1The BSL Fiscal Impact Calculator, released in May 2009, was commissioned by Best Friends Animal Society and funded by the National Canine Research Council.
2FY 2011-12 Adopted Budget and Multi-Year Capital Plan, by Miami-Dade County Animal Services Department.
3Other Dunham calculator examples: U.S. Egg Producers, National Chicken Council and American Meat Institute.
4The feral cat calculator, released in March 2010, was commission by Best Friends Animal Society and funded by PetSmart Charities. By September 2012, it had been removed from the web, apparently for good. In a Facebook post by Shadow Cats, the person asks, "Anyone have the right link to what used to be this "Trap, Neuter and Return Cost Savings Calculator" I cant find it and I need it asap. anyone?"

Janice Dankert, Best Friends' Community Cat program supervisor, responded by saying, "Unfortunately, the BF calculator has been having a lot of issues lately and we've had to take it down. At this time, we don't know if or when it'll get fixed. Sorry." Then Dankert added, "[The calculator] is a great benefit, if it's providing accurate information. Unfortunately, it wasn't always which can be more detrimental to our mission."
5It is also noteworthy that a Huffington Post blogger called out John Dunham's tobacco roots in February 2014, after he was invited to speak at a for-profit college companies' trade association event. In the very same month, writer Arin Greenwood of the Huffington Post -- who frequently pens pro-pit bull pieces for the organization -- willfully pushed bogus results from the sham BSL calculator to bolster the Huffpo's staggering pro-pit bull stance. Greenwood leaves out John Dunham's name.
"Best Friends also emphasizes the cost of enforcing anti-pit bull bans; the group commissioned an economist to put together a tool that calculates the costs by city. And here's a sample calculation: In Baltimore, there's an estimated 151,105 dogs, of which 10,918 are assumed pit bull type dogs. The costs associated with enforcing laws against pit bull ownership would be $992,606 per year." - Arin Greenwood, Huffington Post, citing John Dunham's calculator results