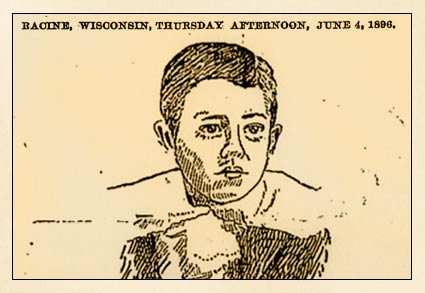 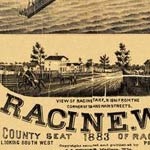 Racine, MI - While researching historical fatal pit bull attacks in April, we discovered the 1896 death of Harry Acklam. The 7-year old boy had been gathering flowers with a friend when the attack unfolded. The case captivated our attention as it involved Racine manufacturing companies, teamsters and a self-appointed fatal dog attack investigator1 who concluded that the two bloody pit bulls found near the boy's body were not responsible for his death.

When we expanded our search outside of news archives, we learned that radio host Louis Rugani had recently created a memorial website for Harry and that his niece, Cindy Bitto, had a left a comment at the page. We spoke with Bitto on the phone about Harry's death. Though over 100 years ago, Bitto is still shaken by the event and the injustice that followed. Two wealthy Racine families allegedly owned the dogs and dishonored promises to help his family.

At one point in our conversation, Bitto relayed a story of calling Oprah in the mid 1980s, who was airing a show about pit bulls (the mid 1980s is when pit bull attacks skyrocketed). Bitto said the call screener told her, "NO ONE IS INTERESTED IN A 100 YEAR OLD DOG ATTACK." Bitto told us that she had called to explain to Oprah that pit bulls had been killing children for far longer than just a few years. Oprah's screeners didn't get it, but we certainly do.

At the turn of the 19th century, Racine was a major manufacturing city, dominated by the J.I. Case Company, a maker of agriculture equipment. The company grew into a global enterprise and still is today. A historical 1883 map shows how the city appeared 15 years before Harry's death. The incident occurred on the south side of town, in a field east of the future Mitchell Motor Car Company and about a block from Harry's home on 1637 Hamilton Avenue.

Ears Bitten Off, Scalp Torn Off and Throat Torn Away.

A Human Ear First Found and Then the Horribly Mutilated Body -- How the Boy Disappeared and Was Found by the Police -- The Inquest.

[June 4] That a little boy could be literally torn to pieces and killed by two ferocious bull dogs, almost within a stone's throw of a large factory where a hundred or more persons are employed and no person witness or know of the fact, seems incredulous, but such a horrible thing occurred last night and today Harry Acklam, No. 1637 Hamilton avenue, lies upon a [block], a pitiful and terrible sight to gaze upon. Both his ears are torn off and face horribly [bitten] close to the head, the hair and scalp torn from the head, throat partially torn out, arm torn and lacerated, eye torn out and face horribly chewed, besides there are marks of the dogs' fangs upon the body as far down as the waist. ("An Awful Death," The Racine Daily, June 4, 1896) 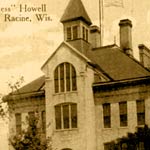 Harry was a student at the Howell School. On the day of his death, he left the school at 3:30 pm with the rest of his classmates. When dusk came and he still had not arrived home, his parents, William and Katherine, alerted neighbors and the police. Officers soon learned that Harry and a friend had been out in a field near the Beebe & Company's factory, located on the south side of the Chicago, Milwaukee and St. Paul railroad tracks, when the dogs attacked.

[Cindy Bitto] Clarence Nelson, the little boy that was with him, ran home and told his parents but no one believed him. After it got dark, my grandparents called the police. The police first had to wake up Harry's schoolteacher, Miss Crane, to find out which classmate he had left school with. Then they woke up Clarence, took up lanterns and went looking for him. It was Harry's father who found his cap lying on the ground. When he picked it up, Harry's ear fell out.

Officers Bassinger and Wood took Clarence into the field where the dogs attacked Harry. They were guided to the scene by the sound of barking dogs. Just after finding Harry's ear, they found his body. It was a gruesome sight and the trampled grass showed that the dogs had drug him around in a large area while killing him. The officers cried when they lifted Harry's mutilated body. It was taken by police patrol wagon to the Porter Furniture Company morgue.2

[Cindy Bitto] Clarence jumped a fence to get away. He could hear Harry crying, "Mama, mama." My grandmother had a bad foot from scarlet fever and used a cane. My grandfather was one of the first teamsters3 and worked for J. I. Case; he drove a team of horses back and forth to Missouri. The day after Harry's death, the police found the bouquet of flowers that he had gathered and took them to his mother. She must have kept them for a long time. 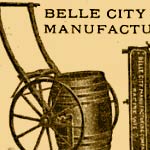 The next day, Coroner S. F. Stripple empaneled a jury to determine who owned the pit bulls. James Pickup initially told police that Belle City Manufacturing owned the dogs, but the company denied this and said that Pickup, who was an employee of the company, owned them personally. Bell City also said the dogs were only 6-8 months old and were not known to be vicious. People living nearby, however, said the dogs were ugly and had attacked before.

[Cindy Bitto] The pit bulls were kept tied up behind the factory and it was believed by everyone that they were used for fighting entertainment for the workers. The killing occurred on Wednesday night; they pitted them on Saturday. There were rumors they hadn't fed the dogs to make them meaner for the fight. Most people in my family are still afraid of dogs in general, and all of us are afraid of pit bulls. They need to stop breeding those dogs; they ought to be eliminated.

The pit bulls were captured and locked in a tramp house.4 Clarence identified the dogs as the attackers. Officers Bassinger and Wood said they had evidence too, including that both animals had blood on their breasts and jaws when they were found. Yet, the dispute over the ownership of the dogs continued. If determined, the owner faced charges of murder in the third degree, according to state law. The ownership question was to be settled the following day.

Boy Killed and Eaten by Dogs

[June 4] The dogs were afterwards found in their owner's barn with their jaws and breasts covered with blood. An inquest will be held tomorrow and the question of who is the owner of the dogs will be settled.

James Pickup, an employee of the Belle City Manufacturing company, claims that he owns the dogs, but the Coroner and officers claim that Emery Jones, a wealthy manufacturer, owns them. Pickup works for Jones, and has told conflicting stories. According to the State law the owner of the dogs is liable to be convicted of murder in the third degree. ("Boy Killed and Eaten by Dogs," Chicago Daily Tribune, June 4, 1896)

Killed by By Bull Dogs

[June 4] At 11 o'clock last night Peter Acklam, 1637 Hamilton Avenue, reported that his son Harry, [7] years old, was missing. The Police began an investigation and an hour later found the remains of the lad in a field east of the Beebe Manufacturing company's plant. A further search revealed that it was the work of two bulldogs, owned by Frank Bull and Emery Jones.

The lad's head and arms were virtually torn into threads. The scalp was torn from the frontal bone clean back to the neck, both ears off, and the arms bitten through and through. [Clarence] Nelson, a schoolmate of the unfortunate lad was the only eye-witness to the boy's terrible death. The two were gathering wild flowers in the field when the dogs approached and attacked young Acklam. ("Killed by By Bull Dogs: Harry Acklam, A Racine Boy, Literally Torn to Pieces," The Milwaukee Journal, June 4, 1896)

Part II will cover the inquest and the wealthy manufactures.

Harry Acklam was born April 22, 1889 in Racine County and was the oldest of 11 children. Cindy Bitto's mother was Harry's sister who was the second youngest. Bitto is also the youngest and was born 23 years after her previous sibling. Bitto did not know either of her grandparents, both died prior to reaching their mid 50s. The small Acklam home at 1637 Hamilton Avenue (now Memorial Drive) still stands.
1Initially we thought that the self-appointed fatal dog attack investigator wrote a memoir and that James Crosby read it. But a member of the DogsBite community suggested that the two might even be ancestors.
2The Porter Furniture Company is now closed.
3Labor unions began forming in the U.S. in the mid-19th century. The Teamster Union was formed in 1903. Harry's father was a teamster in the original sense, driving a team of horses to deliver parts and goods.
4The tramp house may have looked something like this.

7 thoughts on “Part I: The Story of Harry Acklam, Murdered by Two Pit Bulls in 1896”