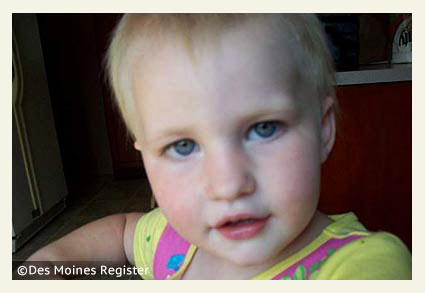 Family Speaks Out
UPDATE 03/07/11: New information has been released about the attack that killed Vanessa, including the 911 call made by Blake Muller.1 The child's mother, Rhonda Marty, said the girl was "never left unattended with the dogs. Somehow they had gotten out on their own." She said that the dogs might have dug underneath the fence surrounding the kennel. But no one knows for sure. The following day, family members "destroyed the kennel and removed it."

Marty also clarified that Vanessa went into her fenced-in backyard because it was "her yard." Her swing set was outside. "She came and went a lot," she said. The two rottweilers were kept in a separate, locked kennel in the same area, but for undetermined reasons got out that day (In the video, the mother's statement includes that the gate was "still locked" after the attack2). The Des Moines Register offers additional insight into Blake Muller's account that day.

03/07/11: Mauling Victim Identified
The young victim has been identified as Vanessa Husmann. The Des Moines Register reports that by the end of the day Sunday, persons working in the backyard of the family's home had removed all reminders of the little girl and the dogs, including: a swing set, a playhouse and the dog kennel. A painful photo depicts a yellow tractor removing a fence as well. The scene recalls a glimpse into what occurred after the death of Kaden Muckleroy last November.

Delaware County Sheriff John LeClere said the dogs where owned by the child's grandfather and were usually kept in Monticello. It was not known if the animals had a prior history of problems. According to LeClere, Vanessa's father, Vaughn Husmann, and her mother, Rhonda Marty, were not home when the attack occurred. The child had been left in the care of her brother, Brandon Marty. Family members did not comment. No charges have been filed.

03/06/11: Death Investigation Continues
Information from WCRG-TV reveals that the babysitter was the victim's 18-year old half brother. Somehow the toddler got out of the house while under his care and into the backyard with the dogs. The child's grandparents were not home during the incident. A neighbor witnessed the mauling and called 911. Some neighbors said the family breeds rottweilers, others said they rarely saw the animals. The little girl's name has still not been released.

03/05/11: Toddler Killed by Rottweilers
Hopkinton, IA - In a developing story, two dogs killed a toddler Saturday in the small town of Hopkinton. The Des Moines Register reports that the girl was in a fenced backyard when the rottweilers attacked. Hopkinton is yet another rural town -- population of about 700 -- to be struck by a devastating fatal dog attack this year. KCRG-TV reports that the dogs belonged to the victim's grandparents, but at the time of the incident was being watched by a babysitter.

View the DogsBite.org Google Map: U.S. Fatal Rottweiler Attacks By State
1Blake Muller, an 18-year old student at Hawkeye Community College in Waterloo, was visiting his mother's house on Saturday who lives across the street from the Husmann family.
2This magical explanation not only refers to the somehow Maul Talk term, but may truly be otherworldly, such as a creature from the X-files re-locked the gate afterward.