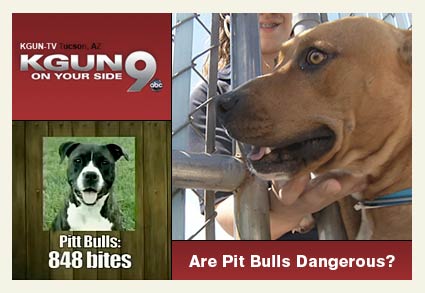 30-Year Old Debate
Tucson, AZ - Last Wednesday, KGUN9 aired a segment titled, "What's the Truth About Pit Bulls?" The segment comes in the wake of the grisly mauling of Michael Cook, a Tucson man who was attacked by his pet pit bull in August and subsequently died. Before his death, doctors were forced to amputate both of his arms and infuse the victim with over 100 pints of blood. Cook's niece, Angela de Soto, states in the segment, "Every day I would tell myself, a dog did this?"1

The segment also interviews Sally and Richard Andrade. After their dog Fabian was killed by a loose pit bull in 2009, the couple set out to pass a new state law. Their dream came true April 25, 2011 when Governor Janice Brewer signed Fabian's Law (HB 2137) into law. The new legislation increases penalties for owners of aggressive dogs involved in attacks upon pets and humans. Prior to its passage, there were no civil or criminal penalties in Arizona for pet-on-pet attacks.

We remind readers that there is no dispute about the dangerousness of pit bulls in high courts across the country: "Unlike dogs who bite or attack merely to protect a person or his property and then retreat … pit bulls besiege their victims relentlessly, until severe injury or death results" (Ohio v. Anderson) Pit bull dogs possess a strongly developed "kill instinct" not shared by other breeds … pit bull dogs are unique in their "savageness and unpredictability." (Hearn v. Overland).

Reporter Tammy Vo also interviewed Lt. Jose Peña Jr. of Santa Cruz County Animal Control. Peña explained to Vo that like many other open admission shelters across the country, they no longer adopt out pit bulls. "It's a liability issue that cities and counties look at," said Peña. The segment closes with dog bite statistic data from Pima County Animal Control. Unsurprisingly, pit bulls lead all biting incidents with 848 bites followed by German Shepherds, 633, and Labs, 496.

Solutions Instead of the "Same Old" Debate?

Answers:
1: Aim for a percentage much lower than victims of automobile and occupational accidents.
2. Require liability insurance coverage of $300,000 for all pit bull owners (See: Merrillville, IN law).
3. Require the sterilization of all pit bulls (See: San Francisco, CA law)
4. Irresponsible pit bull owners, dog fighters and criminals who are using the dogs as guard dogs.

Solutions or More Disfigurements and Deaths?

It is imperative to focus on solutions instead of the "same old" debate, which began in earnest in 1980 in South Florida, "Pit Bull Attacks as Owners Fight Image," (January 24, 1980)2 and "Please, No More of that Garbage About the Gentle Pit Bull" (July 21, 1985). By 1987, in a People Magazine article titled, "An Instinct for the Kill," Minneapolis animal control officer Dave Nordmeyer predicts, "Every city in this country is going to have tragic problems with the (pit bull) breed."

Here we are today with an obscene number of pit bull maulings since 1980 and of these maulings, 255 resulting in an American citizen's death. We have the additional problem of unwanted pit bulls glutting open admission shelters across the country. Staying stuck in the "same old" debate -- Are pit bulls really dangerous? -- disregards established appellate court rulings and a growing number of medical injury studies and assures the continuation of new horrific pit bull maulings.

1Angela's comment reminds us of what Amaya Hess's mother said in 2009: "The question that everyone asks me, is 'how was she burned?' Well, she wasn't burned. She was attacked by a dog."
2The controversy in South Florida began after the brutal mauling of 6-year old Frankie Scarbrough in December 1979, followed by the near fatal mauling of Ethel Tiggs by her own two pet pit bulls. Even at that time, 35-years later, the 1945 fatal pit bull mauling of Doretta Zinke in the region was remembered.