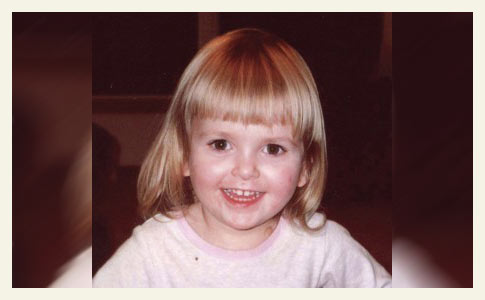 Taylor Becker, 4, of Hustisford, was mauled to death by a family friend's dog.

Backyard Breeders
UPDATE 08/27/10: In an update that can only be described as "subtle bomb dropping," the Beauprey family had only owned the 5-year old dog, named Rocky, for 3 to 4 months prior to the attack that killed Taylor. Dodge County Sheriff Todd Nehls then let slip that there were also five puppies inside the home that Rocky sired. There is no mention of an adult female dog. Authorities say charges are unlikely,1 but they are researching the dog's history and where it came from.

"The boxer is currently in custody at the Dodge County Humane Society. The sheriff said it's likely, at the owner's request, that the dog will be euthanized.

"We're in no hurry," [Dodge County Sheriff] Nehls said. "I think eventually euthanasia is going to take place; the dog will be put down. But we want to wait the 10 days, get some tests from the dog to see if the dog did have some rabies so that we can share that with the family. It may be a concern with the other five puppies on the scene."

The boxer is the father of those puppies, but the puppies were not outside at the time of the incident." (Channel3000.com)

Readers, you are witnessing yet another instance -- which there are too many to count -- of the offspring of a dog guilty of killing a person being "preserved" instead of humanely culled.

08/26/10: Photo Released of Offending Dog
The Wisconsin State Journal has released a photo of the dog, which appears to be a boxer. It's unclear when the photograph was taken or why the sudden change of heart by the Dodge County Humane Society. The little girl's parents, Jennifer and Brian Becker of Hustisford, had been visiting the home of Steven and Stefanie Beauprey when the horrible attack occurred. At the time, the child was alone with the dog in the backyard. An autopsy is being conducted today.

08/26/10: Victim Identified, Taylor Becker
Authorities on Thursday morning identified the victim as Taylor Becker of Hustisford. Neighbors said the home belongs to Steven and Stefanie Beauprey. Troy Erickson, also a neighbor, witnessed the attack. He was on his way to work when he passed what he thought was the dog playing with a piece of carpet or a doll. "I saw the dog chewing on her and dragging her around," Erickson said. "I thought 'Oh my God, I can’t believe I'm seeing this, this can’t be happening.'"

Patricia McConnell, a certified applied animal behaviorist and adjunct zoology professor at UW-Madison, makes the following distorted statement in the article: "There are about 15 dog-related fatalities per year in the United States." (The actual tally is double this amount.) She added that, "A lot of the problems that dogs run into are related to an inability to deal with emotional arousal. As a result, dogs can become aggressive in situations even if they don't start out that way."

The last statement seemingly concerns the split second arousal period of a pit bull to reach explosive aggression, uncommon in other breeds.

08/26/10: Humane Group Disallows Photos
The victim's name will be released following the conclusion of a death investigation being conducted by the Sheriff's Department and the Dodge County Medical Examiner's Office. The Dodge County Humane Society, who took the dog, will not allow photos to be taken of the animal. This may be due to the fact that the dog is not a "boxer," but is a pit bull or pit bull-mix. This would hardly be the first time a publicly funded county humane group has covered up a U.S. pit bull fatality.

08/25/10: Dog Kills Visiting Child in Backyard
Hubbard Township, WI - In a developing story, a 4-year old girl was killed by a dog Wednesday in Hubbard Township, according to the Dodge County sheriff. The victim was "visiting the home" where the attack happened. Both families knew each other, and the girl had been to the home before. The dog, described as a boxer, was on a "leash and chain" in the backyard, but slipped out of it's collar before or during the attack. The leash was long enough to access the location of the attack.

1It is EXTREMELY dangerous to leave a child alone with a chained, unaltered male dog that has recently sired puppies. How does one "get to know" an animal in 3 to 4 months that is left chained outside the family home? DogsBite.org continues to be alarmed by the horrendous "State of Illinois system" regarding child welfare and protection laws. Several recent examples include: Alex Angulo and Gabrial Mandrell-Sauerhage.