Infant Died Quickly
UPDATE 10/07/08: Opal Sao, the grieving dog owner, said she left the baby on her bed, asleep, and had gone to the kitchen for a drink of water just after midnight. Penelope Rose, a pit bull mix, followed her to the kitchen, but while Sao was drinking, she realized the dog had left. She ran to the bedroom to find the dog standing on the bed over the baby.

The bed was reportedly off limits to the dog.

By the time she handed the baby to her niece, his mother, the baby was dead. But the dog attacked the niece, biting her thigh and calf. "The dog went wild," Sao said. "Penny grabbed my niece's leg. She was attacking her. I attacked the dog to get her off. Penny's behavior was something I'd never seen before. I didn't recognize her." The dog was euthanized yesterday by the Hawaiian Humane Society. The mother was not named.

"It replays over and over in my mind," Sao said. "If only we could go back in time. I'd give my life to bring this baby back. It was a tragic mistake." The Honolulu medical examiner's office conducted an autopsy yesterday and said the baby died from "cranial cerebral injuries" from a dog attack. The state Department of Human Services said it was investigating the attack, under a "possible lack of child supervision."

Sao said she bought the dog when it was 6 weeks old as a gift for her husband, who lives in 'Aiea. The dog lived four of the last five years of its life there, until it moved to her Wai'anae home about a year ago. The dog, she said, was not raised to be malicious or violent. Just recently, Sao had let Penny out of the kennel in the backyard to socialize with other dogs, who were inside and outside dogs. Soa said the dog had never attacked anyone before. 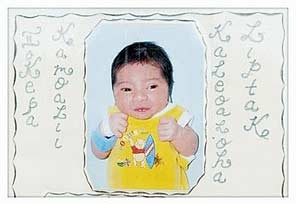 A Family Grieves
With only a few precious pictures of 8-week-old Iokepa, family members are grieving and seeking solace in each other's arms. Friends and family dropped by the home all day yesterday bearing flowers and food. A sheet of laminated photos taken at the hospital shortly after Iokepa was born on July 30 at 7 pounds, 12 ounces, was passed around to family and friends. A funeral date has not been set. Sao said. "We've been crying since Sunday..."

10/07/08: Star Bulletin Alters Story (Revised Story)
On October 6th (below link), the Star Bulletin published a story where the dog was described as a "pit bull mix" in several instances. The following day, these instances were removed. This may be due to pressure from the Hawaiian Humane Society, an entity that did not allow anyone to photograph the dog, did not offer a description except for a "mixed breed" and has many online news articles that show a clear biased toward protecting pit bulls.

DogsBite.org has written a letter to the publisher of the Star Bulletin asking for clarification. Specifically, why did the newspaper alter the description given by a witness, why wasn't the timestamp of the article updated -- to reflect that a change was made -- and why does the newspaper trust that the "mixed breed" identification offered by the society is true? Certainly the society can determine if the dog is a collie-mix or other mix.

10/06/08: "Hiding the Breed" Continues (PDF Original Story)
The Hawaiian Humane Society did not allow KITV to film the dog being held at their facility. Keona Leslie and his wife live in a home behind the family and heard screaming. "At first I thought it was a domestic fight," said Leslie. "But it was a startled, surprised scream that went on for a while." His wife called 911 after the couple heard women screaming and rapid, agitated footsteps across a wooden floor.

Robert Vidinha has lived behind the family's home for 32 years. Four years ago he built a 4-foot-high iron fence because the dog, named Penelope Rose, would bark violently at his young grandchildren. "My grandchildren couldn't go into the back yard because I thought that dog was dangerous," said Vidinha, 68. Vidinha said three other dogs lived at that home, but only Penelope Rose had a mean spirit.

10/06/08: Hawaiian Humane Society in Denial
The dog is now being identified as a pit bull. KHON states, "[Pit bull] A breed believed responsible for a young child's death." This may be another instance of an animal agency attempting to hide the breed. Initial reports labeled the dog a "mixed breed." This label was presumably supplied by the Hawaiian Humane Society because they had custody of the dog.

The Hawaiian Humane Society was founded in 1897. There is no excuse for the organization to be "unaware" of the pit bull's horrendous safety record, which began in the mid 1980's. For over twenty years pit bulls have been killing American citizens at alarmingly high rates compared to other breeds. One has to wonder if "prevention" is truly a goal of the organization.

10/05/08: Family Dog Attack
Waianea, HI - In a developing story, an infant, who has been identified as Iokepa Liptak, was pronounced dead at an area hospital early this morning after being mauled by a dog shortly after midnight at the family's home. The baby was 2-months-old and was attacked by the family dog, according to Major Frank Fujii of the Honolulu Police Department.

The dog, a black mixed-breed, was seized and is being held in isolation, said Kawehi Yim, Hawaiian Humane Society spokeswoman. The baby's mother was also bitten and taken to the hospital; she is reportedly in stable condition. An ambulance crew was called back to the home less than hour later to treat another adult who was not taken to the hospital but was also injured in the attack.

25 thoughts on “2008 Dog Bite Fatality: Infant Dies After Being Mauled in Waianea”