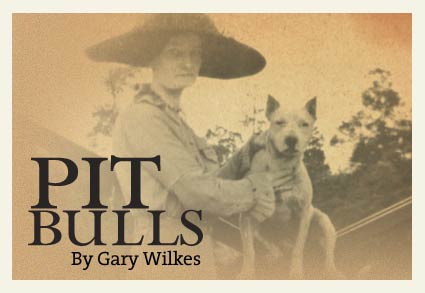 Photo courtesy of the Wilkes family.

Behaviorist Gary Wilkes | Download PDF
Mechanicsburg, PA - Back in January, Gary Wilkes wrote to DogsBite.org asking for permission to use one of the most powerful images posted to the website in a forthcoming article about pit bulls. The photograph shows Wendy Blevins and her daughter in an emergency room just after a pit bull ripped off a third of her daughter's scalp. DogsBite.org reviewed Wilkes' website and bio information, then coordinated with Wendy to send him a high-resolution version of the image.

On May 1, we received an email from Wilkes saying that Off Lead & Animal Behavior, a quarterly magazine for behaviorists and pet care professionals, had published his article. Upon viewing the cover, we knew it was not going to be an ordinary article about pit bulls.1 The contents were so finely woven together with the genetic and behavioral traits of pit bulls and pieces of the Wilkes family history -- his grandfather was a dog fighter -- that we were left breathless by completion.

The article clearly explains why the pit bull problem is unconditionally linked to dogfighting.

It has been over 20 years since a U.S. journalist has presented the pit bull issue in such a compelling and candid way as Wilkes has here. The last was EM Swift who created the 1987 Sports Illustrated cover article, "The Pit Bull: Friend and Killer." The 2010 Wilkes piece depicts the first accurate U.S. version of pit bulls in the 21st century. Much of its power lies in his explanation of the genetic underpinnings of the breed, which cannot be disputed or "trained out" of the breed.

Wilkes, an acclaimed behaviorist, trainer and author with over 30 years experience with dogs, begins the piece by describing the unprovoked pit bull attack on little Charlotte Blevins. This attack sent shock waves through the heartland of America and 3-months later, moved the City of Omaha to adopt a breed-specific law. The Wilkes article is 6-pages and covers many areas, including breed-specific legislation. We've quoted page one below and a small portion from each section.

They were the model of bonded, loving, friendly, affectionate family dogs. On the seventh day, they fought like demons.

"In December of 2008, Tina Agerson was sentenced to nine months in prison. Her jail time was the result of a simple misunderstanding -- two Omaha, Nebraska mothers thought they could pull their infants down the street in a red wagon. Duke, Tina's American Pit Bull Terrier (APBT) didn't think so. He decided to do something about it. More specifically, Duke grabbed 15-month-old Charlotte Blevins by the head and jerked her out of the wagon. He then proceeded to rip off about 1/3 of her scalp.

It is commonly claimed that Pit Bulls only attack people if they aren't properly trained. They are often portrayed as sweet, loving dogs that can be trusted with children. This isn't just the opinion of Pit Bull owners. The United Kennel Club breed standard says so. "APBTs make excellent family companions and have always been noted for their love of children."

Additionally, according to lovers of the breed, Pit Bulls have a very slow fuse and you really have to go out of your way to provoke one. It is also suggested that they are no more violent than other breeds such as Rottweilers -- a breed that also has a reputation for doing great damage to people. Therefore, Pit Bulls should not be regulated based on their breed type. You'll have to excuse me for spitting up my milk, but all of those arguments are hogwash.

If you automatically think I am strongly opposed to Pit Bulls, you'd be wrong. I have trained many of them. They loved me. I loved them. My comments merely reflect that I'm adamantly opposed to hogwash2 and infants having their scalps ripped off.

To understand my opinion of the breed, it helps to know that I have a special attachment to them -- it's in my blood. My grandfather was a railroad station-master in Mississippi in the 1920's. On the side, he bred and fought Pit Bulls all across the south. His job allowed him to travel extensively from Georgia to Louisiana and most points in between, fighting his dogs for side-money.

Family albums include fighting dogs in almost every picture. Six days a week, they played with kids, went on vacations and were an integral part of family life. They also put up with the typical abuse that children heap on dogs and were praised for their ability to be poked, prodded and fallen upon without any reaction. They were the model of bonded, loving, friendly, affectionate family dogs. On the seventh day, they fought like demons.3

The prominence of dog fighting in that time and place isn't hard to understand. Many poor southern men, like my grandfather, made extra money gambling on virtually anything -- horse races, cards, cock fights and dog fighting. It had been a part of their culture since English, Irish and Scotts immigrants migrated south in the 18th century. Genteel Southern society disapproved of these sports and anyone connected with them. My Grandfather wasn't genteel. My grandmother was. Her high-class sensibilities caused her to initially oppose his dog fighting. As might be expected, the lovable, affectionate nature of the dogs led my grandmother to a reluctant acceptance and even a great love of their second source of income. That came to a halt in the late 1920's.

One night, an old drunk tried to cut across the Wilkes' backyard in Petal, Mississippi. The drunk tripped over a chain -- a simple mistake -- and lost a leg to Caesar, my grandfather's favorite pit dog. The old man was a lovable drunk who never harmed anyone. Losing a leg in 1928 Mississippi was no small thing. The community was outraged. A week later, the dogs were gone, for good.

No ordinance banned them from the community -- public outrage and my Grandmother's common sense were the active agents of change. What if one of her children tripped over the same chain, some dark night? Apparently, 90 years later, America is no better able to solve this problem than small-town Mississippi. We seem to have the same public outrage at incidents like Charlotte Blevins' attack, but may be lacking my grandmother's common sense."

DogsBite.org extends enormous gratitude to Gary Wilkes for creating this hallmark piece. It is rare to see the multi-layered issue of the pit bull problem compressed into a single narrative and penned by an award-winning writer. Upon reading the Wilkes piece, one will find that the pit bull problem is only complex due to listening to pro-pit bull groups instead of listening to one's own common sense: Pit bulls are dangerous and the public deserves protection from them.

Gary Wilkes is an internationally acclaimed behaviorist, trainer, author, columnist and lecturer. He has more than 30 years experience with dogs, including eight years of shelter work. Gary Wilkes is responsible for the innovation and development of clicker training as a practical methodology for dogs and with his former colleague, Karen Pryor, introduced this method to the world in 1992. Read full bio.

Click to download a PDF file of the complete article by Gary Wilkes.
1Pro-pit bull groups, such as Bad Rap and Animal Farm Foundation memorialize and "glorify" the pit bull's history of dogfighting by depicting old photographs of a bygone era, websites and online forums do as well. The Wilkes family photos, however, remind us of the implicit danger the breed poses and how one event forced a 1900s family to alter course. This is untrue of John Colby, a prized breeder of fighting dogs during the same era, who continued breeding his dogs after one killed his nephew.
2Hogwash refers to the many arguments and claims pro-pit bull groups make to distort and sugar coat the breed's true genetic underpinnings. Primarily they claim that genetics -- selective breeding to attack without reservation -- is irrelevant in the pit bull argument and that only environmental issues, such as, "It's all in how you raise 'em!" matter.
3It must be noted that of the 10 fatal pit bull maulings so far in 2010, 90% (9) were committed by pet pit bulls upon family members (only 2 instances involved the victimized family member not living within the dog's household). We are near certain that reviewing data from 2005 onward, will show similar results. What may have been true in the early 1900s, pit bulls rarely killing family members, particularly small children, is not true today. This trend has been in place since the "leakage period," (1975-1979) when pit bulls leaked from the tight-knit dogfighting community and began being bred indiscriminately by gangs, drug operatives and pit bull fanciers.