Three pit bulls dragged Rebecca Hatcher into a ditch and nearly killed her in Magnolia, Texas.

Owner Faces Felony
UPDATE 11/21/22: Last week, the owner of three pit bulls that nearly killed a woman in June was arrested and charged with a third-degree felony under the Texas felony dog attack law. Angela Nicole Leach, 34, of Magnolia, was arrested on November 14, 2022. She is currently being held at the Montgomery County Jail under a $20,000 bond. The other owner of the dogs, Mitchell Weemes, was killed in an unrelated shooting during an argument at a gas station back in July.

In mid-June, Rebecca Hatcher was viciously attacked by the dogs while walking near her home in the 37000 block of Pine Bark in the Hazy Hollow Subdivision. Her neighbor, Tammy Remey, found her lying in a ditch nearly dead. "She had holes in her, like about this big in her legs,” Remey said at the time. “She picked up her head and all you could see was just blood everywhere. All over her.” Hatcher remained in the ICU at Herman Memorial hospital in The Woodlands for five weeks.

Hatcher’s sister-in-law, Victoria, praised the efforts law enforcement. She hopes that Hatcher is now eligible for the Texas Crime Victims’ Compensation fund. “Now if we can get Texas Crime Victims to help out Rebecca Hatcher with her million-dollar medical bills,” she wrote. “My sister-in-law was denied help by the Montgomery County Hospital District. She is unable to get medical insurance, apparently doesn’t qualify for DSSI,” and may never be able to physically work again.

07/30/22: Male Owner Shot and Killed
On Friday, July 15, 2022, the male owner of three pit bulls that attacked Rebecca Hatcher on June 20 in the Hazy Hollow Subdivision was shot and killed during a verbal altercation at Mike's Grocery Store #5 in the 30200 block of SH 249. Mitchell Allen Weemes, 24 of Magnolia, was pronounced dead at the scene. The shooter, Daniel David-Joseph Ryan III, 22, of Pinehurst, has been arrested and charged with murder. The motive of the fatal shooting is currently unknown.

A July 12 update on Hatcher's GoFundMe states that she is making progress, but her wounds have become infected. "She is still going into surgery every other day to have her serious wounds cleaned," states her brother, Chris Hatcher. She is also "starting to get weaned off her trache and with hopes should begin advanced speech therapy soon," he said. No one knows when she'll be able to come home, he said. Chris also stated that her wounds have a bacterial infection.

"Rebecca does have a bacterial infection. We had to wear gloves and protective gowns when we were with her." - Chris Hatcher

Since we published this post on June 30, Freddy Garcia, 71-years old, was killed by a pack of pit bull-mixes on July 18 while walking to a store in Fort Bend County, Texas. He was airlifted to Memorial Hermann hospital in downtown Houston, where he died. "He did nothing to provoke those animals," Sheriff Eric Fagan said. "The dogs just attacked him for no reason and for no provocation." Hatcher remains hospitalized at Memorial Hermann hospital in The Woodlands.

Also, since June 30, Michele Sheeks, 44-years old, died after being attacked by seven dogs while walking down a road on April 28 in Red Bay, Alabama. Sheeks was rushed to a trauma center with critical injuries, where she remained until her death on July 12. Sheeks was one of two victims. The same dogs killed an Alabama Public Health employee on April 29, one day after her attack. Two weeks before Sheeks died, bacterial and fungal infection had developed in her wounds.

06/30/22: Judge Orders Dogs Destroyed
Montgomery County, TX - One day after Nicolas Vasquez died of catastrophic injuries due to a violent pit bull mauling in northeast Harris County, a woman lies in similar circumstances in the adjacent county of Montgomery. Like Vasquez, who was walking down a street when three loose pit bull-mixes dragged him into a ditch and mauled him, the same thing happened to Rebecca Hatcher, who remains in the ICU at Memorial Hermann hospital after multiple surgeries.

Her brother, Chris Hatcher, organized a GoFundMe for her. "All we know at this time is that, on June 20, 2022, my sister was attacked somewhere in Magnolia by possibly 3-5 dogs, left in a ditch, and rushed to Memorial Herman in The Woodlands, where she is currently in ICU," he states. Hatcher sustained bites to her neck, back and extremities, including serious damage to her trachea. She has undergone multiple critical surgeries and blood transfusions while hospitalized.

Back in March, Kyleen Waltman, 38, was viciously attacked by two pit bull-mixes and a mixed-breed while walking down a road in Honea Path, South Carolina. Like Vasquez and Hatcher, the dogs pulled her into a ditch and inflicted catastrophic injuries. Vasquez had both legs below the knee amputated before dying and Waltman had both arms amputated up to the shoulder. Waltman remains alive, and "keeps getting denied for Medicaid and her disability," states her fundraiser.

The dogs attacked Hatcher in the 37000 block of Pine Bark in the Hazy Hollow Subdivision just after 10:30 pm. She had been walking home and was only about 100 feet from her house at the time. Tammy Remey, a neighbor, who is featured in the Montgomery County Police Reporter video, heard Hatcher screaming and ran outside. She got into her car and drove toward the screams. She found Hatcher in the ditch. The dogs were "attacking her, tearing her up," she said.

She called 911, who told her not to get out of her vehicle and that help would arrive soon. Remey then describes the scene in horrifying detail. "She had holes in her, like about this big in her legs," she said. "She picked up her head and all you could see was just blood everywhere. All over her. She was in a pink and white dress." At some point, Hatcher stopped screaming. Remey thought the dogs had killed her. Emergency responders transported her by ambulance to the hospital.

Remey is shaken in the video. Yet her commentary is candid and vivid. When she said, "She was in a pink and white dress," time stopped for us. When she said, "She walked by those dogs all the time," it was impossible for us to count how many times we have heard that phrase before, specifically about violent maulings by multiple pit bulls to passersby. Familiarity does not stop unpredictable pit bull violence when only one pit bull is involved, much less a group of them.

Remey remains in close contact with Hatcher's mother to see how she is doing. She's also in touch with the detective on the case and Montgomery County Animal Services, where the dogs are quarantined. While holding her baby boy in her arms, Remey showed the reporter the ditch the dogs dragged Hatcher into. "This is her hair," she points out to the reporter, who states "Oh my gosh!" This is where she was laying, she explained. "The dogs steadily ripping her," she said. 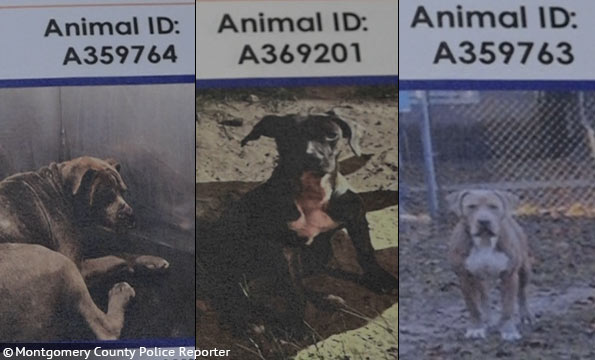 The three pit bulls that dragged Rebecca Hatcher into a ditch in Magnolia, nearly killing her.

The video was shot and uploaded on June 29. At that time, Chris Hatcher said his sister's condition was improving. She was able to write on a notepad and was able to move her legs, he said. Doctors said she could be hospitalized for another two weeks or longer. She still cannot breath on her own and is on a ventilator, Chris said. Hatcher has no insurance and is currently unemployed. "Anything you can donate is greatly appreciated," states the fundraiser.

Also on June 29, a hearing to determine the fate of the dogs was held in the Montgomery County Precinct 5 Justice of the Peace Matt Masden’s Courtroom. The owner of the dogs, Mitchell Weemes, attended the hearing. After listening to both sides, Judge Masden ordered the dogs destroyed. "Weemes broke down asking the Judge to see his dogs. Masden told Animal Control to give him 48 hours to do so before the dogs were destroyed," states the Police Reporter.1

It is unknown if criminal charges against Weemes are being considered. Weemes, who is seen in the video, told Judge Masden that he had paid a friend to watch his three dogs. The friend resided across the street from the witness. The rear of the house is fenced, but not the front. Weemes is seen with one of his pit bulls in two dark grainy photographs on his Facebook page. It's too bad the Police Reporter did not film the vicious dog hearing where Weemes "broke down" like a baby. 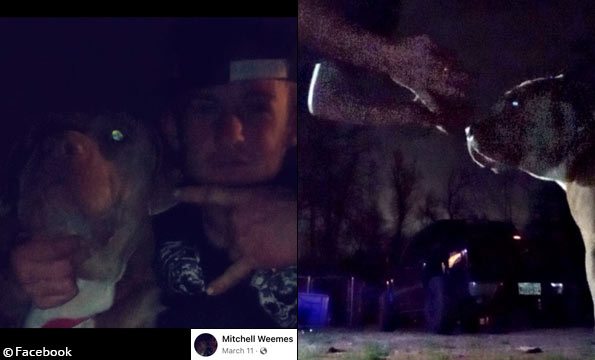 The owner of the pit bulls, Mitchell Weemes, seen with one of his dogs on his Facebook page.

1On the same day Weemes' pit bulls were ordered destroyed, Masden ordered another pit bull destroyed after it attacked a child's face. On June 17, 2022, the child was visiting her father when his roommate's pit bull snapped at her face. The child's mother, Paige Ashbaugh, said she always thought they were beautiful dogs until this incident.