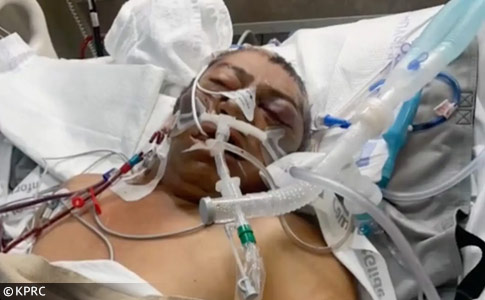 Nicolas Vasquez died after suffering multiple amputations due to a severe dog attack.

Owner Charged
UPDATE 06/28/22: The owner of three dogs involved in a brutal attack that killed a man has been charged under the Texas felony dog attack statute. Matthew Leroy Satchell, 32, has been charged with felony dog attack after his three loose dogs, all pit bull-mixes, attacked 51-year old Nicolas Vasquez. A neighbor found Vasquez in a ditch on June 9, severely injured and moaning after trying to fight off the dogs. Vasquez underwent multiple limb amputations before dying on June 19.

Residents said the dogs had a history of roaming at large and being aggressive. "The message is that you are responsible for the conduct of your dogs if you are not properly restraining them," said Lindsey Bondurant, Chief Prosecutor of the Animal Cruelty Section at the Harris County District Attorney's Office. "So, if your dog attacks someone in the severe manner like we have here, you're held responsible, if there's something you could have done to prevent this," Bondurant said.

Charging documents include statements by neighbors about previous acts of aggression by Satchell's dogs while at large towards humans and dogs. Satchell also positively identified his dogs as "Brownie," "Oreo" and "Donut" when shown photographs of the dogs. Satchell told deputies, his dogs "are not aggressive unless a person comes into his yard." Deputies reviewed surveillance video provided by Satchell that did not show anyone entering his yard, "however, you can hear what appears to be a male screaming for help on the video," state court documents.

Deputies located a hole under the perimeter of Satchell's fence. The "bottom footer of the fence had a dried red substance," which deputies believed to be blood. "The hole under the fence had woodsticks and a branch trying to cover it from being used by the dogs," state court documents. "The sticks and a branch were clearly insufficient to prevent animals from entering or exiting the fence." Two photographs of the hole in the fence were attached to the affidavit as exhibits.

Multiple neighbors told deputies the dogs were routinely outside of the owner's fence. One neighbor stated that on May 28, 2022 the three dogs escaped the property and attacked her dog in the neck while her two children, 15 and 12, were walking their dog. Another neighbor said her son was chased by the dogs while riding his bike several times. A third neighbor said she had to use her vehicle to get between the three dogs and a man they were chasing on May 15, 2022.

Multiple neighbors also spoke to the owner about the dogs being at large prior to the June 9 attack. Both said the owner, Matthew Satchell, "did not seem to care about the dogs being out chasing people" or seem to care about their complaints. Detectives also spoke to the U.S. Postal carrier who delivers to Satchell's home. "She advised she never delivers packages to the door at 1405 Harvard Road because the dogs are always outside the fence," state court documents.

Harris County court records also show that the estate of Vasquez filed a civil claim against Matthew Satchell and Tabatha Satchell after the vicious attack. "At all times relative hereto, Defendants were the owner of a certain animals, to wit: three large pit bulls," states the amended Complaint, filed two days after his death. The causes of action include negligence and wrongful death. The plaintiff seeks general and special damages of over $200,000 but under $1 million.

8. At all times relative hereto, Defendants were the owner of a certain animals, to wit: three large Pitbulls.

10. Plaintiff was left in a ditch outside of Defendants’ residence after he was mauled by their dogs and has since been incapacitated. - Vasquez v. Satchell No. 2022-36564

06/22/22: Man Dies of Mauling Injuries
Huffman, TX - A man died Sunday after being attacked by three loose dogs on June 9 in northeastern Harris County. Before his death, doctors were forced to amputate both of his lower legs. Calvin Stoy, a neighbor, heard dogs barking and the moans of a man just after 9:00 pm. Stoy found Nicolas Vasquez, 51, lying in a ditch off Havard Road. "Both legs were torn up bad, hands and arms. He had bites on his head. He was in really bad shape. He lost a lot of blood," Stoy said.

A GoFundMe was established for Vasquez, who was known by friends as "Mickey." On the night of June 9, "Mickey was brutally attacked and almost eaten alive by 3 aggressive dogs as he was on his way home from the neighborhood corner store as he’s done for years," states the fund's organizer. "As a result of this dog attack he’s lost both of his legs, currently on life support fighting for his life in the ICU, waiting for a liver transplant due to organ failure," states the fundraiser.

A June 21 update indicated that Mickey had passed away. According to his sister-in-law, Maria Castillo, this was the second time the same dogs attacked Vasquez this month. Harris County Animal Control seized all three dogs. The Harris County Sheriff's Office reported they found a hole in the owner's fence and the dogs had blood on them. Four days later, Sheriff Ed Gonzalez asked the public for help with the investigation of Nicolas Vasquez's vicious dog attack in a Tweet.

@HCSOTexas needs your help with the investigation of a dog attack of Nicolas Vasquez. Mr. Vasquez was attacked by three dogs on Thursday June 9, 2022 and is in critical condition. The attack occurred at the intersection of Havard Road and Knoll Lane in Huffman. 1/2. If you or anyone you know has had any interaction with the dogs or the dog owners please contact Deputy Turner with the Harris County Sheriff’s Office Violent Crime Unit. 2/2 - Sheriff Ed Gonzalez, June 13, 2022

A person on the Huffman-Talk Facebook group announced his death on June 19. Kelly Vasquez, the victim's niece, told KRIV that by the time Stoy found her uncle lying in the ditch, "[the dogs] pretty much were eating him at that point." Vasquez suffered bite injuries all over his body. After both lower legs were amputated, doctors had to amputate one of his arms too, she said. "His body couldn’t take it anymore," she said. Kelly's mother, Castillo, hopes for "justice from the law."

By June 20, news reports indicated that one dog belonged to one neighbor and the other two dogs belonged to a different neighbor. It was the latter pair of dogs that had bitten Vasquez on the ankle less than two months earlier. Stoy and Kelly said the dogs had a history of chasing people and being aggressive. The Harris County Sheriff’s Office said that investigators will meet with the Harris County District Attorney's Office to determine if any of the dogs' owners will be charged.

By June 21, one of the dogs began being identified as a Labrador-mix. Despite neighbors saying these dogs had been an ongoing problem, Harris County officials said they had no previous reports on the dogs. In 2020, Veterinary World published a study of risk factors for dog bites in unincorporated Harris County, which includes Huffman. Pit bulls had the greatest frequency of bites (25.07%), and the greatest frequency of severe injuries (49.57%), the study found.

There were 6683 dog bites reported to HCVPH between the years of 2013 and 2016, with stable incidence rates over time. The incidence was highest for both children and older adults. Dogs with the primary breed of Pit Bull had the greatest frequency of bites (25.07%), with the second highest breed being Labrador Retrievers (13.72%)...

Dog sex, dog breed, and confinement status were all found to be significant predictors of severe injury in the multivariate logistic model ... Pit Bulls had the greatest frequency of severe injuries (49.57%), followed by Labrador Retrievers (12.92%) and German Shepherds (7.69%). The odds of a severe injury by a Pit Bull is 213% higher than the odds for dogs of all other breeds (excluding German Shepherd and Labrador Retriever).... 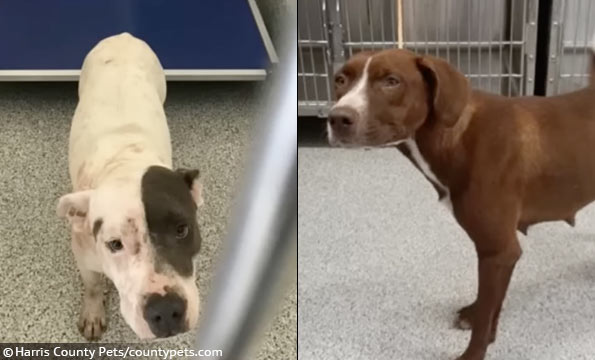 Two of the dogs involved in the death of Nicolas Vasquez in unincorporated Harris County. 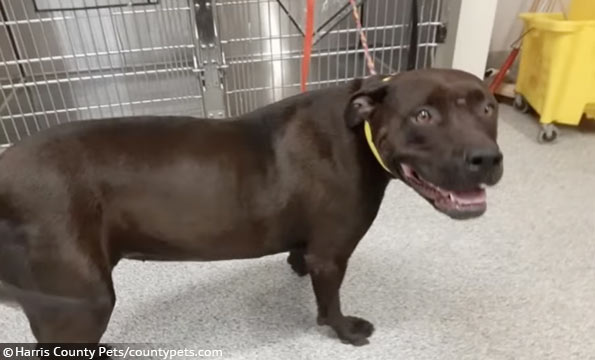 The third dog involved in the death of Nicolas Vasquez in unincorporated Harris County.