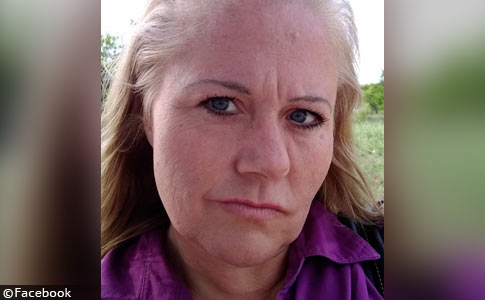 Medessa Ragsdale, 44, was found dead after a vicious dog attack in north Houston.

Dogs Kill Woman
Houston, TX - One woman is dead and another severely injured after a vicious dog attack in north Houston, according to police. The attack occurred in the 5500 block of Arlington Street near East Hamilton Road. About 5:45 am police received a call from a man who said his wife was attacked and injured by dogs. Several minutes later, another person called who said he owned the dogs. According to him, the dogs also attacked a second woman, who he thought was dead in a ditch.

HPD homicide detectives are currently at the scene. The surviving woman was transported to a local hospital. All three dogs have been contained and are in the possession of animal control, police said. KTRK reports that all three dogs are pit bulls. The dogs' owner is being cooperative, police said. The case will go to the district attorney's office for review. This appears to be an off-property attack resulting in death and should fall under the Texas state felony dog attack statute.

The injured woman is expected to survive her injuries, reports the Houston Chronicle. By about 9:00 am, the unidentified victim still lay dead in a ditch outside the dog owner's home. Horrifically, in an unrelated attack, a dog lay dead in a ditch across the street. Neighbors said the dead dog had been there for days. Neighbors said the attacking pit bulls had a history of violence, including previously attacking their owner and a home invasion attack on a neighbor a few years ago.

"This morning we received two separate calls about vicious animals. The first call dropped at 05:48 this morning where the complainant's husband called in and said his wife was attacked by dogs. Officers arrived at 05:52 and met the complainant and the husband at Courtland and Hamilton, where she had multiple dog bites. She was transported to Memorial Greater Heights in stable condition. She's going to survive her wounds.

At 5:55 this morning, the owner of the dogs that did the attack called the police and reported that his dogs had attacked a woman and she was lying in a ditch and she was possibly deceased. Officers tied both calls together and they came back to the scene and they found a woman, unfortunately who was deceased. She was bitten by some animals and that's why we are here.

Homicide was called to the scene and they are doing an investigation. The original investigation is that the dog owners -- when the officers went to the house -- he reported that his dogs probably attacked the lady. She's lying dead in the ditch. He's cooperative, but he's not giving any statements right now until he gets to homicide.

There are three pit bulls that we know. We don't know if they have any shots ... we have them contained. Harris County animal control is en route to take custody of the dogs. That is all we have at this time. We do not know the identity of the deceased lady yet. That is what we are trying to investigate right now." - Assistant Chief Pete Lopez, Houston Police Department

By December 23, the identity of the deceased female was still pending verification by the Harris County Institute of Forensic Sciences. The second female victim was 49-years old. "The two women were not walking together at the time of the attack," states the Houston PD website. A friend of the deceased woman said Medessa "was out here in the streets, but she was full of life." She also said the pit bull "with the ears clipped, the big gray and white one" was aggressive.

On January 2, we contacted the Harris County Institute of Forensic Sciences. The office identified the victim as 44-year old Medessa Jean Ragsdale. The cause and manner of death is pending. 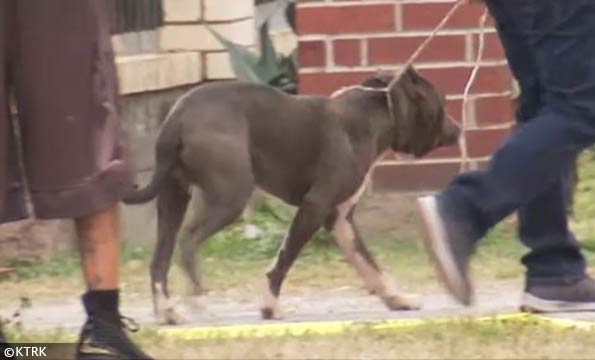 One collarless pit bull at the fatal dog mauling scene being led away by a "twine" leash. 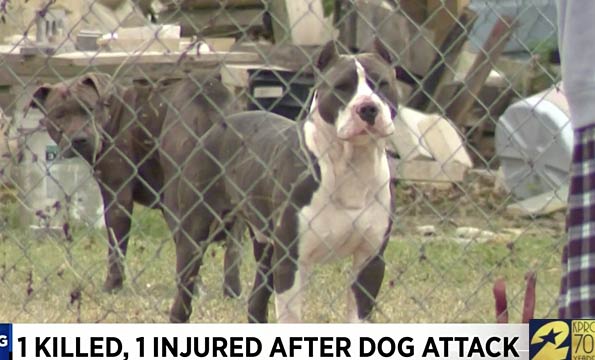 Baseline reporting requirements:
Law enforcement departments across the United States should release consistent "baseline" information to the media and the public after each fatal dog mauling, including these items.
Tweet
Share749
Tweet
Share749
Donate Now