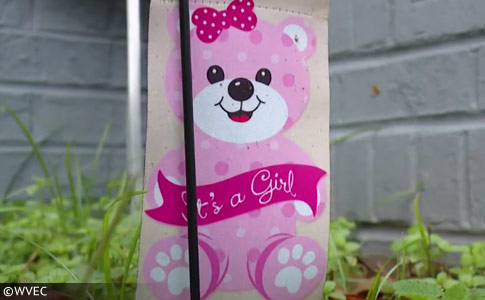 A sign outside the home where a sleeping infant was killed by a "vicious canine" in Hampton.

GoFundMe Tall Tale
UPDATE 10/29/20: A GoFundMe identifies the infant as Michelle Ocean Rae Carr. We must point out two parts of the family's statement. One, "Lane" the family German shepherd was not Michelle's "brother." Nor did this canine love or watch over "her with love." This is the very type of anthropomorphizing that can and does lead to fatal dog maulings of infants each year. Notably, even after the infant's death, the grieving parents continue to anthropomorphize this dog.

Two, the deceased infant's parents claim that they "awoke to a panicked, scared Lane and our baby" and that Lane "had heard her crying and tried to bring her to us. He was trying to help, but sadly, her delicate little body could not take the move." Essentially, Lane, the "hero dog" was only "trying to help," but the large-breed canine mistakenly doled out death instead. We hope that parents and dog owners reading this post understand how dangerously foolish this reasoning is.

Lane is a canine, not the infant's "brother" or any human being. The police statement says, "Hampton Public Safety Communications received a call of a vicious canine that had killed an infant in the first block of Scotland Road." Additionally, it states, "The child’s father observed the extensive injuries to the child and immediately euthanized the canine." These statements from police do not corroborate the tall tale fantasy spun by the infant's parents for a fundraiser.

Nor does the father rapidly shooting and killing the dog corroborate this fantasy. "We are not angry, we are not in a rage," states the GoFundMe. Nor, our nonprofit will add, do we the parents take any responsibility in failing to recognize that anthropomorphizing dogs, especially in relation to infants, is dangerous. Pretending that dogs are Nanny Dogs that allegedly "watch over" infants, is also dangerous. Then, inventing a story that the dog was only "trying to help" is sheer madness.

"Michelle Ocean Rae Carr came into our lives on September 1st, 2020 ... Everyday to look at something so beautiful, so pure, how were we so lucky we thought? Michelle’s brother, Lane, an eight year old German Shepard was always by her side. He loved her, and he watched over her with love. He was there at the smallest movement or sounds from her. Lane has never showed a shred of aggression toward anyone in his life. He was a big, curious, goofy child.

On October 26, 2020 at 3:00 am we awoke to a panicked, scared Lane and our baby... Lane had heard her crying and tried to bring her to us. He was trying to help, but sadly, her delicate little body could not take the move. I, the father, explained to him that we were not angry with him but there are consequences for everything in life; even accidents. He was euthanized. We are not angry, we are not in a rage. What happened was purely an accident."

The grieving father also does not understand that 99% of all fatal dog maulings are ruled an "accidental" manner of death, whether there are criminal charges or not. An accidental manner of death simply means an unintentional death, but also a violent death. There are four different non-natural manners of death: accident, homicide, suicide and undetermined. Finally, the last update notes, "Gofundme has requested we explain more in detail our purpose of this fundraiser."1

"We are raising funds to cover costs of our daughters funeral, time off work, to keep our roof over our head, counseling, and a million other obvious reasons. We would love keepsakes of our daughter as well. Gofundme has requested we explain more in detail our purpose of this fundraiser, so this is an unexpected update. We cannot imagine not being together to help each other through this unimaginable time. All funds will be transferred to our bank account..."

We feel terrible for this loss of life. We feel terrible for these parents. Had their beliefs about dogs, however, not been a tall tale fantasy, this loss of life would not have occurred. Hampton police had a realistic and practical view of canines. When asked by a reporter, "What triggered the dog to attack"? Hampton Police spokesperson Sgt. Reggie Williams said, he couldn't say "outside of just a guess or speculation," but "animal behavior can be unpredictable." Dogs are not human beings. 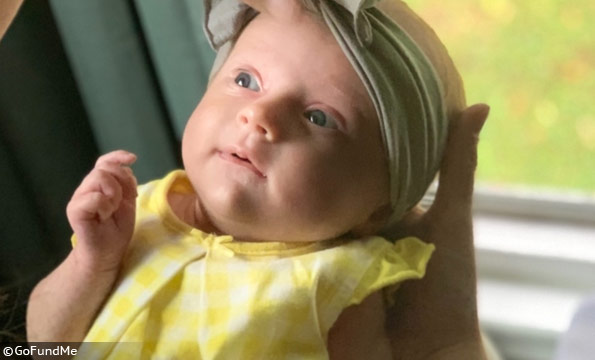 A photograph of infant Michelle from the parent's GoFundMe campaign, uploaded Oct 27. 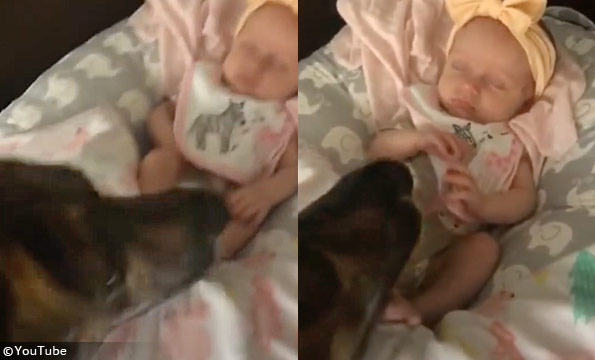 The elderly German shepherd-mix seen in one of the videos posted to the GoFundMe page.

10/26/20: Infant Killed by Family Dog
Hampton, VA - An infant is dead after being mauled by a dog, according to the Hampton Police Department. At about 3:16 am, Hampton Public Safety Communications "received a call of a vicious canine that had killed an infant" in the 100 block of Scotland Road. "Prior to the officer's arrival, the dog had been euthanized by its' owner," police said in a statement. When officers arrived, they observed a small infant that had sustained injuries consistent with a dog attack.

"The preliminary investigation revealed that the infants' parents were sleeping in their bed when they were awakened by a large amount of motion," states the release. The infant had been in a cradle next to the bed when the attack occurred. "The child’s father observed the extensive injuries to the child and immediately euthanized the canine. The family states that the canine had not been previously aggressive and are fully cooperating with the investigation," police said.

The Virginian-Pilot reports the infant was a 2-month old girl. According to Sgt. Amanda Moreland, one parent shot and killed the dog while the other called police. The injuries were consistent with a canine attack, not just a bite. "There is nothing that would indicate this was anything other than a tragic accident," Moreland said. Police clarified the dog was "shot outside the residence" by its owner. Animal control took possession of the deceased dog, an 8-year old German shepherd-mix.

This infant's deaths marks the seventh infant (< 11 month old) killed by a family dog so far this year and 17% of all dog bite fatalities. In six of these deaths, the breed of dog was released. Pit bulls were responsible for four of these deaths, 67%. Other breeds included a Belgian malinois and this 8-year old German shepherd-mix. Notably, the "mix" portion can indicate a wide range of breeds, including husky, which has a long track record of killing newborns sleeping in cradles.

The cradle in the Virginia fatal dog mauling was later characterized as an "electronic swing" by the Virginian-Pilot. The dog was also identified as a male German shepherd-mix, named "Lane." 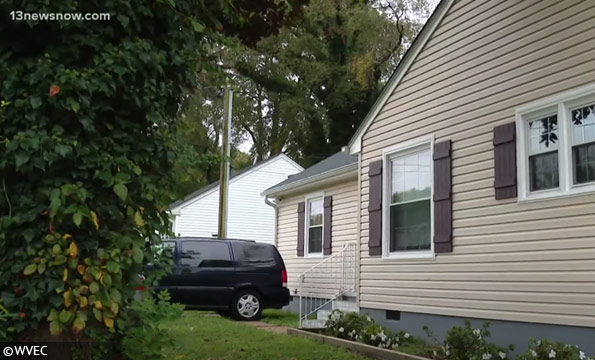 Residence where a newborn baby girl was killed by a "vicious canine" in Hampton, Virginia.

1Perhaps GoFundMe did not believe this tall tale fantasy either?