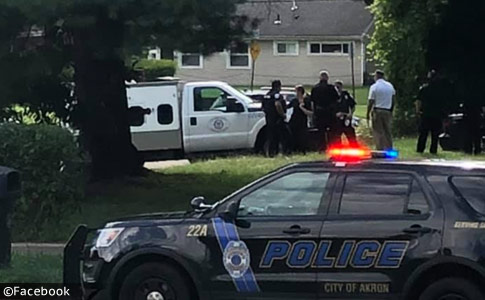 A 7-month old boy is dead after being mauled by a family pit bull in Akron, Ohio.

No Charges Expected
UPDATE 08/11/20: Authorities have still not identified the 7-month old boy mauled to death by a family pit bull last Friday. The child's great-grandmother, 77-years old, was holding the baby when the dog fatally attacked, Akron police said. An ambulance transported the boy to Akron Children’s Hospital, where he was pronounced dead. The family dog, a 7-year old pit bull, was taken into custody by Summit County Animal Control. Police say that no criminal charges will be filed.

08/08/20: Baby Killed by Family Dog
Akron, OH - A baby boy is dead after being mauled by a pit bull, according to Akron police. At about 3:48 pm Friday, officers were dispatched to a home in the 1300 block of South Hawkins Avenue in West Akron to assist paramedics at the scene. Officers found the baby and the grandmother had been injured by the dog. The child was transported to Akron Children's Hospital, where he died. The grandmother's injuries were minor; she refused treatment at the scene.

The child was under the care of his grandmother when the dog attacked, police said. It is unclear if the child lived at the home or if he was visiting his grandmother's home. No details about the circumstances of the attack were available late Friday. Summit County Animal Control seized the animal. An autopsy will be conducted on the child Saturday, according to the Summit County Medical Examiner's Office. The boy will likely be identified when the cause of death is released.

The other fatal pit bull mauling that occurred in Ohio this year is the death of 4-month old McKenzie Terwell in Dayton, Ohio in January. We expect criminal charges in the coming months. At the time of the baby's death, the mother was asleep on the couch after taking three prescription medications. When the baby's father returned home, he found the infant dead on the floor. Before police arrived, the father told officers he had thrown a Marijuana bong into the kitchen trashcan. 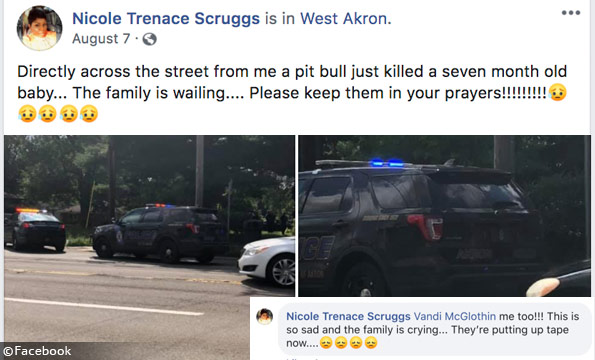 A neighbor took a photograph while Akron police were at the scene of the fatal pit bull mauling.

20 thoughts on “2020 Dog Bite Fatality: Baby Killed by Family Pit Bull While Under the Care of his Great-Grandmother in Akron, Ohio”