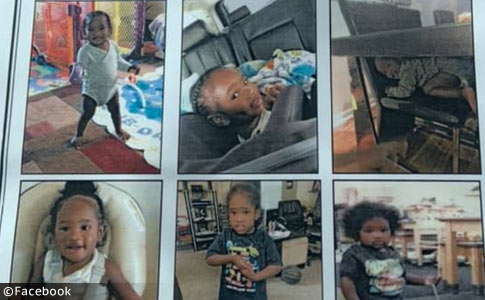 Brice Sanders, 2-years old, died on June 1 after being attacked by a pit bull.

Animal History Summary
UPDATE 07/22/20: In mid July, we obtained information from our June 10 records request to Stockton Animal Services. The dog that attacked and killed Brice Sanders on May 31 was a male intact pit bull named "Rocko." The animal history documents we obtained from animal services also stated the dog had Taser needles on his hind right backside and the left side of his neck -- the latter only penetrated the dog's harness. It's clear that arriving police used a Taser on this dog.

Rocko did not belong to a person at the residence in the 4400 block of Giselle Lane, where Brice and his mother were visiting. A member of that residence was "watching" Rocko for its owner, whose home was listed as being several blocks away. In our statistics, this is called a "double" visiting scenario. This is an exceptionally high-risk scenario for children: The child is visiting where the dog is being kept and the dog is being "watched" at the location while its owner is away.1

By combining these two scenarios are in our statistics, we located 55 deaths over a 15-year period (2005-2019) that met the criteria. Pit bulls carried out 80% (44) of these attacks, which is 9 times more frequently than rottweilers (5 deaths) and 44 times more frequently than any other breed (1 death each) involved in "double" visiting scenarios. Of the 44 pit bull attacks, 57% (25) involved the dog killing a family or household member. There is no other dog breed to compare this to.

Though the breed identification photograph provided in the animal history records is dismal, we were able to locate "Rocko" on the dog owner's Facebook page. Rocko was taken to the shelter on May 31, became an owner surrender on June 4 and was euthanized on June 17, according to shelter records. The records also indicate the dog was 4-years old, but it was not. Rocko was at least 7-years old. Along with photos, the owner has a 2014 video of this dog calling it "Rocko." 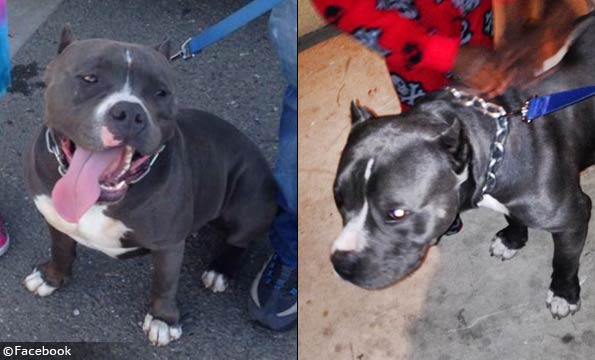 06/11/20: Fatal Dog Attack Confirmed
Stockton police confirmed that a pit bull killed a 2-year old boy. The attack occurred about 9:00 pm on May 31, while the boy's family was visiting a home in the 4400 block of Giselle Lane in Weston Ranch. Brice Sanders was airlifted to University of California, Davis Medical Center, where he died early the next morning. The pit bull continues to be held in bite quarantine at Stockton Animal Services. Police Department spokesman Officer Joe Silva was unable to provide further details.

"The fatal incident was not reported by Stockton police at the time," reports The Record. The attack occurred on the same night that officers were responding to multiple locations on reports of large protests and looting in the city. Stockton police Tweeted five warnings between 8:18 pm and 8:45 pm, including one that states: "Large protest occurring in Downtown Stockton. Do not endanger yourself, stay away from the area. Large amount of protestors and police presence."

The fund organized for his mother, Shantoya Cruze, to help pay funeral costs, has now reached over $41,000. Services for Brice were held in San Francisco on June 5. Yesterday, we submitted a public information request to Stockton Animal Services. The agency must respond within 10 days. Prior to learning the location of this fatal attack in Stockton, we confirmed the attack did not take place in San Francisco County, Suisun City, Gilroy, Sacramento County or Solano County.

06/10/20: On June 10, we became aware of the location of this deadly attack. We are preparing to request records from this Central Valley jurisdiction in San Joaquin County right now. Previously, we confirmed this tragic attack did not take place in San Francisco County, Suisun City, Gilroy, Sacramento County or Solano County. As suspected, this fatal dog mauling involves a pit bull.

06/05/20: Young Boy Identified
California - On June 1, a GoFundMe organized by Monica Lopez and Kelly Marriott for Shantoya Cruze was started. "It is with very heavy hearts, that we are informing you of our dear friend Shantoya’s loss of her precious two-year old son, Brice. He passed away early on the morning of June 1st." In just four days, the fund has nearly reached $40,000. Cruze and her family appear to be based in the Bay Area, and her name has numerous references to San Francisco addresses.

We first became aware of this possible fatal dog mauling on June 2, after a San Francisco-based father, whose son knows the victim's older brother, posted: "As if there isn't enough terrible stuff going on. A basketball teammate of Theo had a very tragic and traumatic couple of days. His little brother, 2-year old Brice, was killed in a dog attack. Here's a link to the family's GoFundMe page." Through social media comments, we learned that the attack occurred outside of the Bay Area.2

The victim's older brother, Tim, is an 8th grader and plays on the Bay City Basketball team in San Francisco. On June 5, we were able to learn the victim's full name, Brice Sanders. "We would like to offer our dearest condolences to the family of 2-year old Brice Sanders, who passed earlier this week. Brice’s brother Tim is a beloved 8th grader in our program … Rest in paradise, Brice." Without knowing the jurisdiction of where this fatal dog attack occurred, our hands are tied.

This is not only a lack of media reporting. This is a lack of police reporting, which typically issues news releases to the media, especially after a young child has been killed by a dog. Outrageously, that did not happen in this case. On June 3, San Francisco Animal Care and Control confirmed the fatal attack did not occur in their jurisdiction. The only other information that we have about family members is Brice's uncle, Edwin Rosario, who also publicly posted the family's GoFundMe. 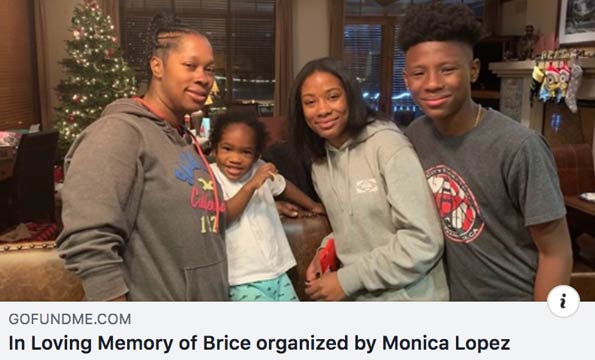 Fund grows for family of 2-year old Brice Sanders, who was mauled to death by a dog. 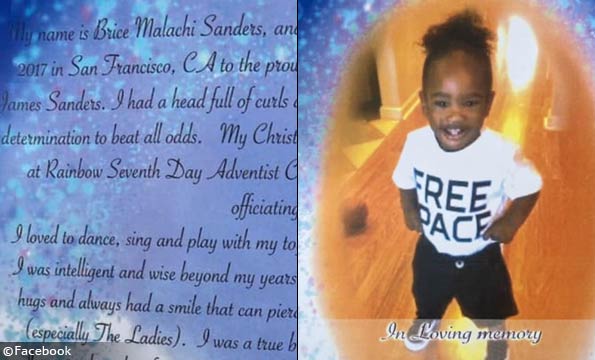 A family member posted photographs of the memorial program for Brice Sanders to Facebook.

View the DogsBite.org Google Map: California Fatal Pit Bull Maulings.
1The "double" visiting scenario is the combination of a "watcher," such as a babysitter or a person dog-sitting and the victim "visiting" or temporarily living with the dog owner/dog harborer at the time of the fatal attack.
2It does not make sense for a person who knows the family to fabricate a child "was killed in a dog attack."