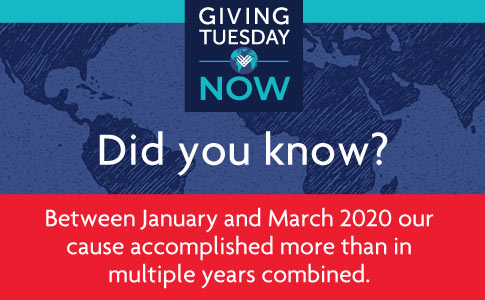 Did You Know?
DogsBite.org - In response to the unprecedented need caused by Covid-19, the creators of Giving Tuesday, an annual day of giving that occurs in early December, have launched Giving Tuesday Now. This new global day of giving takes place today, on May 5, 2020. You can pin your story of giving -- whatever that may be, including volunteering and showing kindness -- to the global map. The Giving Tuesday Now website also offers a number of different giving ideas and themes.

We wanted to take this day to tell our readers about our new GoFundMe Charity page, where you can donate directly to DogsBite.org, but more importantly, you can start a GoFundMe Charity campaign for our nonprofit. GoFundMe has long been the leader in raising funds for individuals, families, small businesses and pets in need. However, these are not 501(c)(3) tax-exempt public charity organizations. Last October, GoFundMe launched this charity fundraising platform.

On May 5, DogsBite.org will be fundraising for "Staying the course during Covid-19," in our first GoFundMe Charity campaign. We need your help to ensure that our many research projects continue. We will primarily be sharing on social media. We are asking our supporters to help us reach our goal of $1,000 on this global giving day. No amount of giving is too little! Supporters can also simply share our campaign on social media, enabling our cause to reach new supporters.

The campaign reminds readers that our nonprofit was requested to provide comments to the Department of Transportation about pit bulls flying in the cabin by a major airline. Our data was also central to comments made by airlines. Despite Covid-19, between January and March 2020, our cause accomplished more big-ticket items than in multiple years combined: the DOT's about face on banning pit bulls and the mayor of Denver's veto of the pit bull ban repeal legislation.

Finally, the campaign reminds supporters that one public health crisis being interrupted by a much larger public health crisis does not remove the first crisis. It just adds to it! In mid-April, Denver reported a tripling of dog bites in March after the stay-at-home order went into affect. Minneapolis saw an 87% spike in dog bite reports compared to last year. "Emergency responders have been running from dog bite call to dog bite call during the Covid-19 crisis," reports Fox 9 News.

In late April, one of these attacks involved a family pit bull severely attacking its owner and her baby. The mother was attacked when she intervened to save her 8-month old child. Both victims were in critical condition when police arrived. Minneapolis police released very few details, but later stated they are investigating "child endangerment" and a dog bite. This likely indicates the dog had a history of aggression. This child remains on our Dog Bite Fatality Watch list.

It Takes a Village

Just like it often takes a village to stop a violent dog attack, right now it will take a village to uncover severe dog maulings that are not being reported by the media. If bites rose two and three times during shelter-in-place, then severe attacks rose too. Be sure to leave links in comments for serious dog maulings in the coming months. We have over 100 Google alerts set up to capture media reports, but attacks right now are more likely to be found on GoFundMe and social media.

Thank you to our dedicated readers and supporters during this time! We love you!

Staying the course during Covid-19. Our first fundraiser on the GoFundMe Charity platform.