San Francisco, CA - In November, Black Summers Productions (BSP) published the Vicious and Dangerous Dog hearing involving the pit bulls "Cochise" and "Lakota." Dramatic footage of the violent attack is included, which begins at 2:49 minutes into the hour-long hearing. The attack occurred in San Francisco's Chinatown along a sidewalk and street. In September, we released a collection of dangerous dog hearings that were primarily based on hearings filmed by BSP.

Immediately, we call to attention the handler's leash contraption -- one pit bull is leashed to the other, creating a towline. So the handler is only holding one leash, which is enduring the burden of two pit bulls pulling. The leash breaks when chaos ensues. Also note the handler is wearing "slippers" that he steps out of seconds after the dogs lunge. The "empty" slippers remain in the camera view as the attack occurs and while the handler tries to regain control of his dogs.

After much struggling, Patrick is able to reach a car parked nearby and puts his dog onto the roof. The victim then uses his body and the car to shield Tashi from a second attack. For the next agonizing 90 seconds, we watch as the handler of the pit bulls tries to get the dogs back under control. The brown pit bull had slipped its collar during the attack, so the handler, Mr. Cho, has nothing to hold onto. He is forced to construct a makeshift collar at the scene, which does not last.

Patrick testifies first. It is the first time he has seen the surveillance video captured by a jewelry store. His account characterizes the dangerousness of two or more pit bulls attacking. "They were both tearing at him from different sides," he said. One had him by the head and the other had his thighs. "So it was nearly an impossible task." I would fight one dog, trying to get him off the head then I would fight the rear dog, trying to get that dog off. Then the first dog would reacquire its grip.

Patrick also explains how he followed the handler, Mr. Cho, for three blocks, who attempted to leave the scene with the two pit bulls after the attack. "I asked him to stop multiple times," Patrick said. "I followed him for three blocks, the whole time telling him to stop. He refused to stop. It's all recorded on the 911 call." He finally stopped near his home, after a police patrol unit spotted him. "They ordered him to stop," Patrick said, "and he finally stopped. That is when police got involved."

The Handler and Owners

The pathology of vicious dog ownership is on full display when Mr. Cho and Mr. Powell testify. Starting with Mr. Cho stating, "I'm not the owner of the dogs" to blaming the 12-pound dog for causing the attack because it "barked first." The pit bulls "are not vicious," he claimed. "They were provoked." We've seen this same pathology play out many times in the 12-years of our nonprofit. For this reason, we are summarizing the rest of this testimony using the Statement of Decision.

"Mr. Cho, the subject dogs' guardian, testified as follows in pertinent part: Mr. Cho does not own Cochise or Lakota. Mr. Powell does. Cochise has been under Mr. Cho's care for about a year. He just had Lakota that day.

Both dogs were on leash. He "guessed" he just lost control. He then said the dogs got loose, because the leash broke. He is unsure what happened that day but does not believe the dogs are violent.

Neither Lakota or Cochise have previously bitten another animal or human.

He had no knowledge of the September 28, 2015, described in ACC records during which Cochise attacked dogs in the park at Silver at Bayshore.

Cochise is neutered. Mr. Cho played one iPhone video of Cochise playing at dog park with other dogs, two of which are small, and a video of Cochise walking with a ball in his mouth not under Mr. Cho's leash control. The second video was taken the day before the hearing...

Mr. Powell, who owns both subject dogs, testified as follows, in pertinent part: Mr. Powell apologized to Mr. Yuen for the incident. Mr. Cho called him and told him what happened. He owns Lakota and Cochise. He is unable to walk the dogs due to a work injury. Mr. Cho has kept Cochise for about a year. Mr. Cho has kept Lakota on and off for a year.

He was not present for the incident.

With regard to the September 28, 2015, incident, described in ACC records, during which Cochise attacked dogs in the park at Silver at Bayshore, he never attacked another dog. Cochise chased a ball.

'Cochise breaks all the myths about pit bulls.' He has never seen Cochise or Lakota be aggressive. They are around little kids all day as Mr. Powell has numerous grandkids.

He has never had the dogs formally trained but he would be willing to do so. He loves his dog like his own children..."

After the owners finish testifying and showing videos of the pit bulls behaving friendly, Patrick returns with a powerful rebuttal (50:55 to 56:05). "I'm speechless," he said. "I don't have words." First they tried to pull the blame game. Then after the attack, they filmed the black dog walking off leash on a public street in violation of the law to prove it was friendly. The first bite is the first bite, Patrick said. I don't care how many videos prior to the first bite show the dogs being friendly.

On September 13, 2019 the Statement of Decision was issued by hearing officer Janelle Caywood. "Cochise" and "Lakota" were declared "vicious and dangerous" under Article 1, Section 42 of the San Francisco Health Code. Officer Ryan Crockett had stated at the end of the hearing, "Had that car been going ten miles faster, which would have increased the stopping distance, [Patrick] could have had his life ended." Both pit bulls were ordered to be humanely euthanized.

"Lakota and Cochise pose a grave threat to public safety. The surveillance video shows a sustained, vicious, and harrowing attack that lasted nearly four minutes. Both dogs bit Tashi repeatedly. Any one of the bites could have been fatal. The attack could have been fatal to Mr. Yuen because the two dogs chased Mr. Yuen and Tashi into the street. Even if Tashi barked first, which the undersigned doubts, a tiny dog barking does not render a subsequent four-minute attack by two large dogs provoked within the meaning of Section 42...

The undersigned concurs with the recommendation made by the San Francisco Police Department: Lakota and Cochise must be humanely euthanized to ensure that an attack of this nature will never happen again. The risk to the public is simply too great to do otherwise particularly with guardians who continued to let the dogs off leash in public places while a vicious and dangerous dog hearing was pending..." - Statement of Decision, September 13, 2019

Dogs "Still Out There"

On October 4, 2020, Black Summers Productions published an update in the video's description. The owner of "Cochise" and "Lakota" was notified of the euthanasia order on September 16, 2019, but he never surrendered the dogs. Despite attempts by authorities to seize the dogs, they never prevailed. The last attempt was August 9, 2020, when it was determined that Powell no longer owned the dogs. These two dogs, legally declared vicious, continue to remain unaccounted for.

"UPDATE -- October 4, 2020: The owner of Cochise and Lakota, Robert Powell, was notified of the euthanasia order on September 16, 2019. When the dogs were never brought in, a seizure order went out on September 21, 2019. Despite several attempts by San Francisco Animal Care and Control, with the help of the Police Department, the dogs were never located or seized. On September 23, 2019, the owner claimed that he had relocated the dogs to his ex-wife's home in Georgia, but did not provide any address or phone number. There were still reports of the owner being seen with the dogs in San Francisco as late as January 2020. The last attempt to seize the dogs was August 9, 2020, at which time it was "determined ... both dogs 'Lakota' A320869 and 'Cochise' A378135 were not on the property and no longer owned by Powell." The dogs remain unaccounted for and are presumably still out there somewhere as of this update. SFACC records contain no indication that SFACC has ever warned the public or local authorities in Georgia or elsewhere about these dangerous dogs, or that the owner was ever cited for any code violation subsequent to the destruction order." - BSP 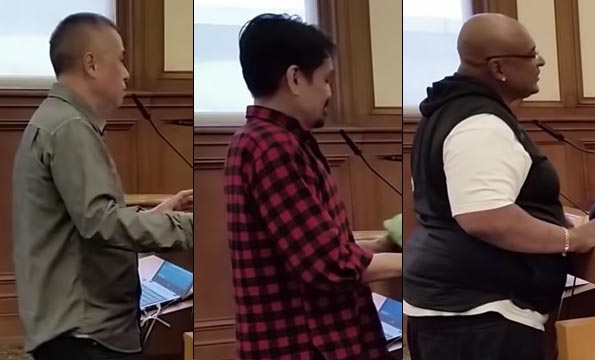 38 thoughts on “Dramatic Attack Footage Shown in Vicious and Dangerous Dog Hearing; Two Pit Bulls Attack a Man and His Dog in Chinatown”