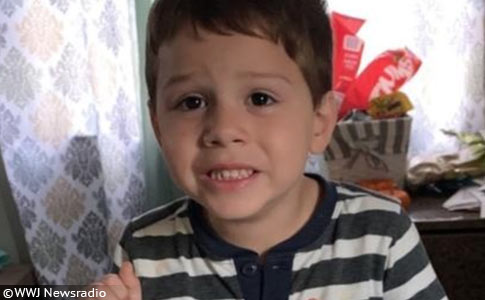 Benjamin Cobb, 4-years old, was killed by a pit bull his family was housing in Hazel Park.

Dog Owner Named
UPDATE 10/29/20: On the 1-year anniversary of Benjamin Cobb's death -- who was killed by a pit bull that "detonated" like a bomb inside his home -- this is what the dog's owner, Chris Mallory, told Benjamin's mother. It is so dreadful that we will not quote any portion. Brandi Halterman had been housing the pit bull, "Bolo," for less than a day when the dog attacked. Bolo was allegedly 1-year old and light brown colored, but is not one of the pit bulls depicted on Mallory's Facebook page.

Brandi also posted today that if anyone "witnessed Shannon or Chris abusing animals in any way, EVER, SPEAK UP! This is what will get Ben justice." [sic] Brandi left the contact number for Det. Janeen Laity. Shannon Kania is Mallory's partner, who actually started this conflict two days earlier by posting a meme of a female struggling to control an XL pit bull (American bully), stating in jest, "This is me with Remi!" Brandi did not find this amusing. Remi is the female littermate of Bolo.

Brandi was in the room when the pit bull violently attacked her son. She tried to fight the dog off by stabbing it with scissors, then with a steak knife. Bolo was still "actively attacking" her son when police arrived. On October 31, Brandi started a public group, Justice for Ben. One post shows an exchange between Brandi and Shannon discussing the dog sitting plan weeks before the attack. Shannon told her that Bolo had to be kept in a separate room to keep her dogs from fighting. 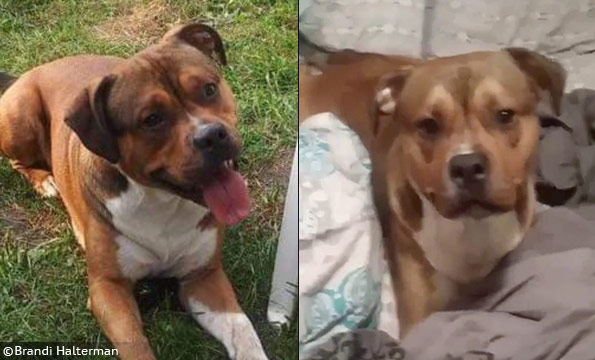 A "Bolo on the bed" video was relayed to us, along with a still photograph. Bolo is a tri-colored pit bull and is the male sibling of the tri-colored female pit bull seen on Mallory's Facebook page.

10/31/19: New Details Released
New information has been released about the pit bull that "detonated" like a bomb late Monday in a Hazel Park home, brutally killing 4-year old Benjamin Cobb. The male pit bull, named Bolo (Be On the Look Out), is 1-year old and light brown colored. The child's mother, 38-year old Brandi Halterman, was in the room when the dog violently attacked. She tried to fight the pit bull off by stabbing it, first by using nearby scissors, then a steak knife she ran to the kitchen to retrieve.

Bloody and injured by the multiple stabbings and zings from high powered Tasers, the pit bull was still able take off after the attack.

When police arrived, the pit bull was still "actively attacking" the boy. Police fired Tasers at the dog. Then the pit bull bolted from the home and was spotted by a resident about a mile away. "It appears as if this was just a sudden attack," Hazel Park Police Chief Brian Buchholz told the Detroit Free Press. The situation was so horrific that even the officers and firefighters who went to the house were traumatized. "We don't know what may have sparked it," Buchholz said.

Regarding the "foster" language initially used by police, this is summed up best by Nolan Finley of The Detroit News: "Apparently, the mother, who survived, was housing the dog on behalf of acquaintances who could no longer keep it while a permanent owner was found." That is a form of fostering and is loaded with red flags, however, it is not the actual meaning of a dog being placed with a foster by a rescue or shelter. The "source" of Bolo still has not been released by police.

The neuter status of this 1-year old pit bull has not been released either. If the dog was altered by that age, it likely came from a shelter or rescue.

On Wednesday, The Detroit News reported that a crew dressed in hazmat suits could be seen removing furniture from the home. In a surreal photograph by Sarah Rahal, one sees a crew member in a hazmat suit with orange shoes near the home and a large orange pumpkin in the background. The image depicts the horrific and bloody reality after a pit bull, which allegedly had "never shown aggressive behaviors" before, literally detonated like a bomb inside that home.

No one in that household was spared. Brandi witnessed the attack on her son and received about 20 stitches. Benjamin's 14-year old sister made the 911 call. “They heard the screaming," Chief Buchholz told 7 Action News. "And they didn’t know what they were responding to. But they knew it was bad." Police and firefighters rushed into a scene that must have looked like a warzone -- none of them were spared either. Then the hazmat cleanup crew, whose job must have been grim.

The Oakland County Medical Examiner’s office said the boy suffered blunt force trauma to the neck, a perforated neck artery and possible asphyxiation from dog bites to his neck. The manner of death was ruled an accident, but it should have been ruled a canine homicide. Bolo (Be On the Look Out) continued executing the killing bite despite Brandi using lethal force on the dog. Then Bolo bolted after being struck by Tasers. Bolo singlehandedly turned that home into a hazmat site.

The Owner of the Pit Bull

Police have not released any details about Bolo's owner. According to Brandi's family, the mother made "a kind gesture to help a friend in a time of need." Police said the boy's family had been watching the dog "for less than a day for a friend, who was staying at a Madison Heights hotel." Finley interpreted (or was told) these ambiguities mean that the mother was housing the pit bull "on behalf of acquaintances who could no longer keep it while a permanent owner was found."

The violent attack "has taken an unimaginable toll on our family, friends, and all those who knew our sweet boy," states the family on their GoFundMe page, which as of Thursday had reached $23,000. It's taken a toll on police, fire, the doctors who tried to save the boy and the entire Hazel Park community as well. For all of these reasons and more, over 1,000 jurisdictions in this country regulate this dog breed in order to prevent these sudden and often deadly detonations by them.

10/30/19: Pit Bull Kills Boy in Hazel Park
Hazel Park, MI - A 4-year old boy is dead after being brutally mauled by a pit bull his family was fostering. The attacked occurred about 6:45 pm near East 9 Mile Road and John Road, according to police. During the attack, the mother began stabbing the dog, but the animal got away. Police located the dog and Tased it. The pit bull was later euthanized. The young boy, who suffered bite injuries to his body and neck, was rushed to a local hospital where he was pronounced dead.

Neighbors told WDIV the family had only moved into the home a few months ago and the 60-pound pit bull was a recent addition to the family.

Hazel Park is located in Oakland County and lies within the Detroit Metropolitan Area. In August, 9-year old Emma Hernandez was brutally killed by three pit bulls while riding her bike in an alley behind her home in a southwest Detroit neighborhood. The owner of those dogs, Pierre Cleveland, was later charged with second-degree murder, involuntary manslaughter and possessing dangerous animals causing a person's death. His criminal trial is expected to be held next year.

The deadly attacked occurred in the 500 block of East Woodruff Avenue. The boy's 14-year old sister called 911 at about 6:45 pm and said her mother was trying to stop the dog from attacking the boy in her home. Investigators said the mother used a knife, cutting the dog, while defending her son. The family had been fostering the male, 60-pound pit bull, according to police. No information was provided regarding the "source" of the dog or whether the dog was neutered.

"A preliminary finding appears that this case was a tragic incident and the investigation continues to determine why the dog attacked the boy."

When police arrived at the scene with the Hazel Park Fire Department, the pit bull was still "actively attacking" the 4-year old boy. Multiple Tasers were fired to free the boy from the jaws of the pit bull. The dog then bolted from the home. Officers later located and secured the animal. The dog was taken to a local veterinarian and euthanized, investigators said. The boy's 38-year old mother was also taken to the hospital and treated for non-life-threatening dog bite injuries.

WWJ Newsradio identified the victim as Benjamin Cobb. A GoFundMe created for the family stated the fostering situation was a "kind gesture to help a friend in a time of need, for a dog that was said to have never shown aggressive behaviors." Tiffany Bieniewicz, the fundraiser organizer, added, "We have learned that we are far from alone in our struggle, as diligent and loving parents from all walks of life have suffered this catastrophic loss under similar horrifying circumstances."

Knew Dog Less than One Day

The Morning Sun reports the boy's family had been watching the dog for less than one day for a friend, who was staying at a Madison Heights hotel, according to police. The mother was with her son when the dog attacked. "The boy was in his bedroom and his mother was working on a wall in the room," said Hazel Park Police Chief Brian Buchholz. "The mother heard the dog growl when the attack started. It was very sudden." Police arrived to the dog still actively attacking the boy.

"It was hard for our officers and myself to see, so I can’t image what the family is going through." - Hazel Park Police Chief Brian Buchholz

The Oakland County Medical Examiner’s office said the boy suffered blunt force trauma to the neck, a perforated neck artery and possible asphyxiation from the dog biting his neck. The manner of death was ruled an accident. After the pit bull had been stabbed by the boy's mother and Tased by police, finally freeing the boy, the dog bolted from the family's home and ran for about a mile before it was spotted by a resident. The dog was later taken to a veterinarian and euthanized.

In 2008, Hazel Park declared pit bull dogs "dangerous" (08-08), effectively banning new pit bulls. Existing pit bulls were grandfathered in with licensing and containment requirements. News reports, however, refer to this as a February 2012 ordinance. In July 2015 (0-15), at the request of pit bull owners, the city repealed the ban, but left some restrictions in place, including a 6-foot fencing requirement for pit bulls and proof of insurance. Mayor Jan Parisi signed the partial repeal.

In May 2017 (04-17, 05-17, 6-17), all references to breed were removed, along with special requirements for pit bulls. Mayor Jeff Keeton signed these repeals. Neither is serving the Hazel Park community any longer. Previous fatal dog maulings in Oakland County include: infant Holden Garrison, killed by a family "catahoula cattle hound" in Davisburg in 2014 and Samantha Black, 2-years old, killed by two family dogs, a husky and a malamute, in Waterford Township in 2005. 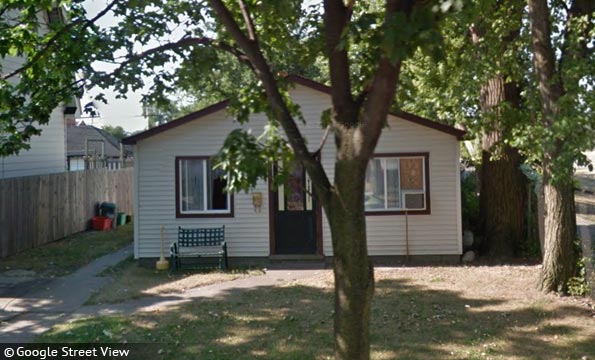 Hazel Park home where a 4-year old boy was killed by a pit bull his family was housing. 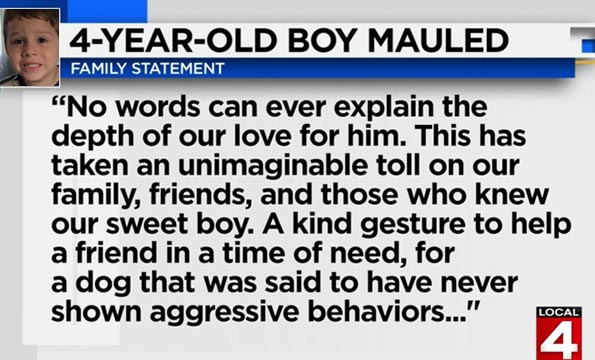 Statement released after Benjamin Cobb, 4, was killed by a pit bull his family was housing.