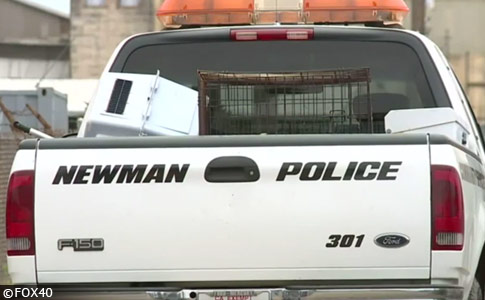 A 2-year old boy is dead after being attacked by a pit bull-mastiff mix in Newman.

Photos of the Family Dogs
UPDATE 07/02/19: Police have not released a photo of the dog that killed a 2-year old boy last week, nor have they released the child's name. But an image posted to his mother's Facebook page two days before the deadly attack show four family dogs. The large dog, a male named "Crash," is the suspected killer. The mother has since removed or privatized these photos. Comments with the photo indicate the family had recently moved into the home on Pine Street.

A June 23, 2019 post by the mother indicates the female pit bull, named Miss Calliope (Callie), had been adopted by the family just days before the fatal attack. "And yes, that makes 4 [dogs]," the mother commented, adding that Callie was adopted from the Stockton shelter. It is unknown how long the boy's family had owned "Crash." Comments also indicate that the new addition to the family's home, Callie, had caused some disturbances that the mother felt had been overcome. 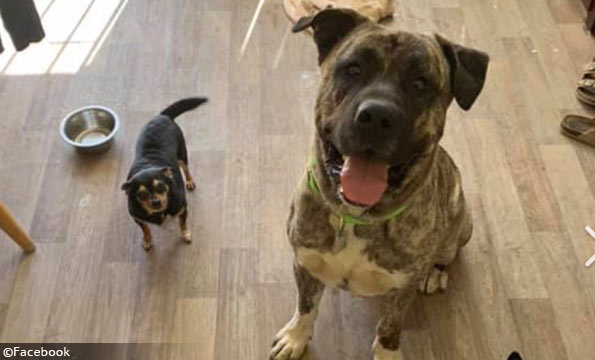 06/27/19: Family Dog Kills Toddler
Newman, CA - A child has died after being attacked by a family dog, Newman police said. The attack occurred in the backyard of the family's home in the 1900 block of Pine Street. Newman Police Lt. Brett Short said the child suffered multiple bite injuries. He was transported to Emanuel Medical Center in Turlock where he was later pronounced dead. The dog was taken into custody, Short said. The Stanislaus County Sheriff’s Department has launched a death investigation.

Fox 40 News spoke to Stanislaus County Sheriff's Sergeant Joshua Clayton. It was "a pit bull-mastiff mix, and it was a family dog," he said "It's just an overall tragic, unfortunate event." The dog was impounded and will likely be euthanized, Clayton said. Julia Hernandez, a neighbor who only spoke in Spanish, said the same dog tried to attack her own dogs. The dog had lunged at the toddler before too. "I've also seen the dog try to bite him," her son translated for Fox 40 News.

On Thursday, June 27th at 2:08 p.m. the Newman Police Department and Emergency Medical Services (EMS) were dispatched to the 1900 Block of Pine St. in the city of the Newman for a report of a dog attack. The Newman Police Department and EMS arrived and located a 2-year-old male who had been attacked by the family dog in the backyard. EMS transported the child to Emmanuel Medical Center in Turlock. At the hospital the child was pronounced deceased. The dog involved in the incident was the family dog and was a Pitbull/Mastiff breed. The dog was quarantined and is currently in the custody of Newman Animal Services.

The Stanislaus County Crimes Against Persons Team and Coroner’s office were activated to assist the Newman Police Department in the investigation. At this time this incident is only a death investigation.

Our condolences go out to the family of the child.

The Sacrament Bee also spoke to the Hernandez family, who share a fence line with the child's home in the 1900 block of Pine Street. Alejandro Hernandez, Julia's grandson, said he had to place a reinforcement board on the fence after the dog broke through it a few weeks earlier. He said the dog nearly bit his grandmother. The child's grandmother said she was not ready to talk about the attack. The circumstances leading up to the attack are still under investigation.

Since January 16, 2019, dogs have killed five people in California. Four of the five, 80%, involved pit bulls, including the deaths of, Lana Bergman, 70-years old of Joshua Tree; Angela Johnson, 54-years old of Anza; Crystal Pearigen, 36-years old of Bakersfield; and this 2-year old boy. In March, 2-year old Jaysiah Chavez was killed by two roaming rottweilers in Fresno. No criminal charges have been brought in any case, but four of the fatal attacks involved at large dogs.

Baseline reporting requirements:
Law enforcement departments across the United States should release consistent "baseline" information to the media and the public after each fatal dog mauling, including these items.
Tweet
Share542
Tweet
Share542
Donate Now