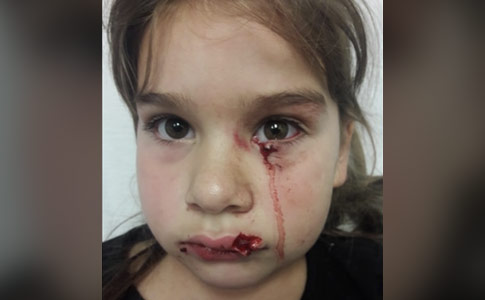 Million Dollar Lawsuit
Portland, OR - A civil lawsuit seeking $1.1 million in damages was filed last week by the mother of a 5-year old child who was mauled in the face by an unconfined emotional support pit bull at the Portland International Airport in 2017. The lawsuit was filed in Multnomah County Circuit Court and names multiple defendants, including the dog's owner, Michelle Brannan, who should have known that her pit bull "possessed vicious propensities," the Port of Portland and Alaska Airlines.

The lawsuit claims the Port of Portland is at fault for allowing a dangerous emotional support animal (ESA) into the airport and to pass through security without the dog being in a crate. The lawsuit also claims that Alaska Airlines is at fault for allowing Brannan to bring a dangerous ESA into the gate waiting area, where the attack happened, when the dog was not a trained service animal and was not crated, muzzled or otherwise restrained from attacking a person.

On or about December 18, 2017, Gabriella Gonzalez, age 5, was at Gate C7 of the Portland International Airport waiting for a flight with her family. Defendant Michelle Brannan came to the Portland International Airport with her pit bull. Ms. Brannan claimed the pit bull was an emotional support animal. She went through the ticketing process at Alaska Airlines without the pit bull being in a crate, kennel or other secure container. She then took the pit bull through Port of Portland security without the animal being in a crate, kennel or another secure container. Once inside the secure area of the airport, she went to gate C7 where her pit bull attacked Gabriella Gonzalez causing serious injuries as fully set forth below.

In Oregon, dog owners are only held strictly liable for the payment of "economic damages," such as medical bills. For full compensation, the victim has to prove "negligence, violation of an animal control law like a leash law, or that the dog was known to be vicious toward humans," states DogBiteLaw.com. The lawsuit alleges that Brannan had "prior notice of the vicious propensities and disposition of her pit bull" and is strictly liable for the economic and non-economic damages.

The Port of Portland and Alaska Airlines are strictly liable for both types of damages due to negligence. The entities violated the Portland International Rules, which prohibit bringing an animal into the airport unless it is in a carrier or other approved container or is a trained service or law enforcement animal. Both also failed to "inspect the premises" to discover that passengers were bringing unsecured, untrained, dangerous animals into the airport, states the lawsuit.

All three defendants are strictly liable for both types of damages due to negligence; Brannan alone is accused of the "vicious propensities" claim.

Portland attorney Chad Stavely filed the lawsuit. He told The Oregonian that Gabriella and her family were waiting at gate C7 to board a plane to Texas for the Christmas holiday. The child's mother and her older sister stepped away to get coffee while Gabriella and her 13-year old brother waited at the gate. With Brannan’s consent, Gabriella started to pet the dog. The pit bull then attacked her face, puncturing her eyelid, severing her tear duct and inflicting other injuries.

The Oregonian also spoke to Kama Simonds, a spokesperson for the Port of Portland. Simonds said the port does distinguish between trained service animals and emotional support animals -- the latter must be in carriers while moving through the airport. If the animal is too large for a carrier, it must be on a leash within three feet of its owner. Port officials cited Brannan for failing to crate her pit bull, so officials must have believed the dog was not too large for a carrier.

Unlike in most aircraft cabins, where ESAs are allowed uncaged, the Port of Portland required them to be in carriers during the ticketing process, passing through security and moving through the airport. Six months after Gabriella was bitten, the Port of Portland updated their rules and posted signage in the terminal to inform owners of emotional support animals that they must be kept in a pet carrier. Only ESAs "too large" for a carrier can be "carried" or on a short leash.

In July 2017, we published a special report after an untrained, uncaged "support dog" repeatedly attacked a passenger in the face onboard a Delta aircraft in Atlanta. The report details the unprovoked attack, how passengers routinely "game the system" by buying fake service dog and ESA credentials online and argued that ESAs in the cabin should be limited in size. The 50-pound "support dog" had been sitting on its owner's lap when it attacked the passenger one seat over.

Our report was limited to inside an aircraft. The Portland case involves the broader experience of airline travel -- time spent traversing, waiting and interacting at an airport. There are numerous security protocols at airports to keep the public safe and to stop threats from boarding a plane. Yet in this case, Brannan waltzed through the security checkpoint with her support pit bull uncrated, while knowing of the dog's vicious propensities, and gave a young child consent to pet her dog.

We cannot emphasize enough the negligent actions of Brannan, given her alleged "prior notice of the vicious propensities" of her pit bull.

The definition of an ESA is that they do not require any training, much less any training for public access. The sole function of an ESA is to "provide comfort" to a person with disabilities. If the Port of Portland and Alaska Airlines had been enforcing the Portland International Rules, Brannan and her unsecured ESA would have been stopped at the Alaska Airline ticketing area or when reaching the airport's security checkpoint. Both entities failed to do so and a lawsuit has resulted.

The lawsuit also states the Port of Portland and Alaska Airlines are negligent for "failing to warn guests of the dangers of unsecured, untrained animals in the airport so that they could protect themselves." When Brannan's unsecured emotional support pit bull bit Gabriella in the face at gate C7, there was no notice to the public that ESAs by definition are untrained (as are fake service dogs) and can pose a danger when unsecured. Such notices are likely absent today too.

Tightening the Reins on Untrained ESAs

In January 2018, Delta Air Lines introduced "enhanced requirements" for service and emotional support animals, requiring proof of vaccinations and more. Many airlines followed, including Alaska Airlines, whose new policy came into effect in May 2018 -- just five months after Gabriella was bitten. Among Alaska's requirements are a Confirmation of Liability and Emotional Support Animal Behavior form and an Animal Health Advisory form -- no proof of vaccinations is required.

In June 2018, Delta Air Lines announced additional restrictions on service and support animals. The restrictions include limiting each passenger to one emotional support animal per flight and banning pit bull-type dogs as service or support animals. "These updates, which come as the peak summer travel season is underway, are the direct result of growing safety concerns following recent incidents in which several employees were bitten," states the Delta news release.

The Delta policy went into effect July 10, one day after public comments closed by the Department of Transportation to determine the "appropriate definition of a service animal" and ways to reduce the number of fake service and support animals. Nothing has resulted from the proposed rulemaking process thus far. Allegiant Air followed suit in December 2018, stating on their service animal and ESA forms, "Please note Allegiant does not transport pit bull or pit bull-type breeds."

That same month, Delta pushed even further by banning ESAs on long haul flights and banning all service and support animals under the age of four months. “We will continue to review and enhance our policies and procedures as health and safety are core values at Delta,” said John Laughter, Senior Vice President – Corporate Safety, Security and Compliance. Again, the rulemaking process can be arduous and Delta must only provide "reasonable accommodation."

Port Authorities and Airlines on Notice

The million dollar lawsuit filed by Gabriella's mother places all port authorities and airlines on notice. An airport is a "public access" space that is governed under the Americans with Disabilities Act (ADA). The act does not afford ESAs access to public spaces. Only trained service animals have this authorization. Municipal port authorities with lax enforcement of their own rules or those that grant ESAs the same access privileges as service dogs may be at risk of a similar lawsuit.

Stavely told the Washington Post that he hopes the lawsuit will push port authorities and airlines to strictly enforce the strengthened polices around ESAs that were largely created in response to the severe facial attack inflicted by a "support dog" onboard a Delta aircraft in 2017.1 Stavely also said that he plans to investigate whether the pit bull that bit Gabriella was a legitimate emotional support dog. Brannan's ESA letter simply prescribed an "animal" for her, not even an animal type.

This $1.1 million lawsuit will indeed push the envelope on this competing public interests debate. The public and airlines like Delta exhibit far less tolerance today for people abusing the Air Carrier Access Act so their pets can fly free. The severe facial attack Gabriella suffered while waiting at gate C7 could have been averted. All three parties, the dog's owner, the Port of Portland and Alaska Air, are now being accused of fault. We hope this civil lawsuit is argued before a jury.

The Portland Law Office of Chad Stavley specializes in significant injury and wrongful death cases and has the "largest dog attack verdict in recent Oregon history," according to the firm's website. 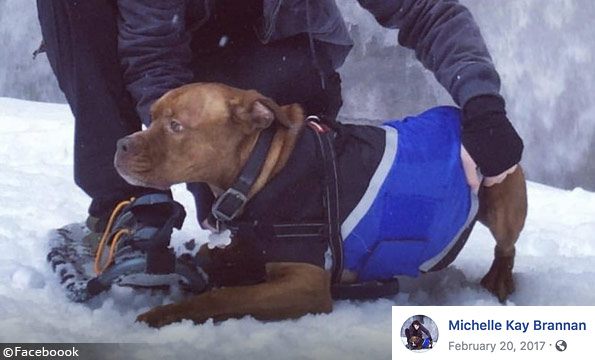 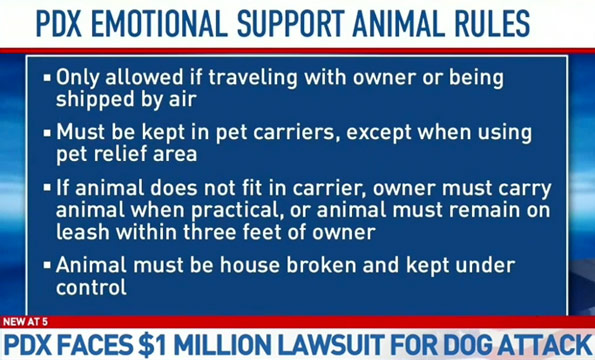 1Technically, the 50-pound dog that attacked Marlin Jackson in the face was a psychiatric service dog (PSA), according to comments by Delta Air Lines posted to the U.S. Department of Transportation website in July 2018. Most airlines treat these two types of dogs the same in flying requirements, despite one being a service dog under the ADA that "performs a task" and the other, which "provides comfort" to a person with a qualifying disability.

Related articles:
07/05/18: Why Breed Matters in Service Dogs and Why Pit Bull Service Dogs are a Bad Idea
06/23/18: Delta Bans Pit Bull-Type Dogs as Service, Support Animals in the Cabin...
01/25/18: Delta's Policy Response After a Passenger was Attacked by an Emotional Support Dog
07/14/17: Delta Passenger is Severely Attacked by an Unrestrained 'Emotional Support Dog'