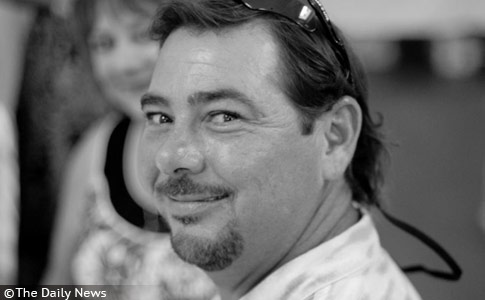 Cause of Death
UPDATE 03/20/19: Jimmy Grigg died of blood loss from the dog attack, confirmed Galveston County Sheriff Henry Trochessett to the Alvin Sun Wednesday. Trochessett received confirmation last Friday about the cause of death. Jimmy lived on the same property in the 5600 block of Highland Road with several other family members. The Griggs have owned the property for decades, reports The Sun. Jimmy died en route to Mainland Medical Center on March 13.

A relative who lives on the multi-home Grigg property owns (is caretaker of) the dogs that killed Jimmy. The dogs were formerly described as "cattle dog-mixes." The Sun reports new information, including that at least one of the dogs is a mastiff-mix, which lines up with our research on family member's dogs potentially living on the property at that time. No one mistakes a "cattle dog-mix" for a "mastiff-pit bull mix."1 At least, no official who is trying to be honest with the public does.

Jimmy Grigg was a central plant operator for Moody Gardens. "Jimmy loved fishing, kayaking, playing dominos, pool, cards and working in his mancave. He LOVED life," states his obituary. "Jimmy was loved by everyone and will be sadly missed, but we will always carry his memory in our hearts." Services for Jimmy were held Wednesday at Emken-Linton Funeral Home in Texas City, Texas. Sheriff Trochessett said the investigation into Jimmy's mauling death is ongoing.

03/14/19: Relative's Dogs Kill Man
Santa Fe, TX - A man died Wednesday after being attacked by three dogs belonging to a relative. The attack occurred in the 5600 block of Highland Road in the unincorporated area of Santa Fe in western Galveston County. Police responded to the home after a 911 call by the victim's brother at 3:50 pm, saying his brother had been attacked by the dogs and could be dead. Galveston County Sheriff Henry Trochesset offered few details to news media outlets in an interview Wednesday.

Fox 26 spoke to Katie Ewing, a neighbor. "How do you even let that happen, honestly? Were the dogs not in a pen or what?" Ewing said she filed several complaints with animal control prior to the fatal mauling. "Every morning for a good month straight it sounded like there was like dog fights going on," Ewing said. Whenever animal control would come out the property, they would say, "Oh, it looks all normal to me," Ewing said. "It's all really sad. My prayers are with them," she said.

A subsequent news report identified the victim as 53-year old Jimmy Lee Grigg. The dogs are also being described as "cattle dog-mixes." There were two males and one female. The Galveston County paper, The Daily News, reports that Sheriff Trochesset is not yet prepared to say whether the dogs killed the man, or if Grigg suffered some type of medical episode before the attack. It's unclear if sheriff's investigators have been able to interview family members since the attack. 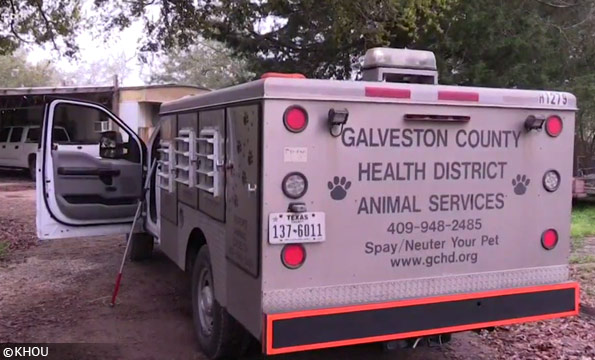 A Galveston County Animal Resource Center truck at the scene of the fatal dog mauliing.

1Roy Gerald Grigg III (the third), a nephew of the victim, was the original owner of the mastiff-pit bull mix that we link to. He was incarcerated at the Galveston County jail at the time of the attack and still is (Case # 18-CR-2111). He has been incarcerated at the facility multiple times since 2015. He apparently also owns a second pit bull-mix. His address on prison records is listed as, 5637 Highland Rd. There have been "multiple" fatal dog attack cases in the past where an incarcerated person's dog(s) killed a person while under the caretaking of another party. We can't confirm that his dogs were involved in this fatal attack. So for now, this remains a footnote.

Baseline reporting requirements:
Law enforcement departments across the United States should release consistent "baseline" information to the media and the public after each fatal dog mauling, including these items.
Tweet
Share282
Tweet
Share282
Donate Now