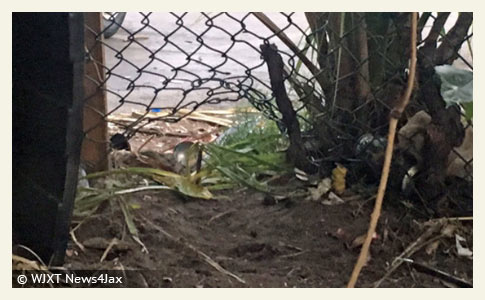 Dangerous Designation
UPDATE 08/23/16: The coroner has still not announced the official cause of death of 83-year old Michael Downing. Sheriff's investigators believe Downing was attacked by up to four large dogs belonging to Lephus Felton. The dogs escaped through a sizable hole in the owner's fence, brutally attacked Downing then dragged him back under the fence through the same hole. The victim was found dismembered inside the dog owner's backyard, just inside the fence line.

"By far it's probably the worst thing I’ve ever seen in my life. There was only 30 percent left of his body probably." - Witness Mackenzie Partin

Animal control authorities are moving forward with declaring all four dogs dangerous -- a rottweiler and three large mixed breeds. The legal designation will eventually result in the euthanasia of the animals. Dog-related evidence was gathered at the scene and sent to an animal forensic lab at the University of Florida. Felton is no stranger to law enforcement. Over the last 5-years, police have been called to Felton's home 14 times, though only one call involved an animal complaint.

Multiple neighbors said the dogs had escaped from the same damaged fenced area before and were aggressive toward people who walked by. Neighbors also told ActionNewsJax they had complained to the city about the dogs, as well as the dog's owner. "I knew it was coming. It was just a matter of time," neighbor Mark Jones said. The Jacksonville Sheriff's Office is working with the State Attorney's Office to determine if criminal charges will be brought against Felton.1

08/20/16: Dragged Under Fence
The elderly victim was reportedly taking out the trash when the deadly attack occurred. The trash dumpster is located in the back of the parking lot of the Franklin Arms Apartments, close to the fence of the dog owner's yard. In an extremely predatory attack, investigators believe the dogs escaped under the fence through a gaping hole, viciously attacked the man then dragged him back under the fence through the hole, continuing the attack in the dog owner's backyard.

The victim was found on the ground inside the dog owner's backyard, inside the fence line. - Sgt. Chuck Ford, Jacksonville Sheriff’s Office

The last time a horrific, predatory attack of this nature occurred was last December in Detroit. Xavier Strickland, 4-years old, was walking with his mother when three pit bulls escaped under the fence of the dog owner's home and "snatched" the boy from his mother's arms. The dogs dragged Xavier by the hood of his coat across the residential street, pulled him back under the fence of the dog owner's yard, where a fourth pit bull joined in the brutal attack, mauling him to death.

08/19/16: Dog Attack Suspected
Jacksonville, FL - An elderly man was found dead in an apparent animal attack Friday afternoon. Police discovered the man on the property of the Franklin Arms Apartments near a fence line that contained holes. Sheriff's investigators believe one or more dogs from an adjacent home came through the holes and attacked him, Sgt. Chuck Ford of the Jacksonville Sheriff's Office said. Four large dogs were taken into custody by animal control; at least two appear to be rottweiler-types.

The attack occurred in the 1100 block of Jessie Street. Deputies responded to a call about 4:30 pm. The elderly man was initially found dead by the person who owns the home that backs up to the Franklin Arms Apartments (and presumably owns the four dogs). Another news report states the victim was walking along Jessie Street when the dogs attacked, dragging him along the fence line. The victim's name has not yet been released. The sheriff's office continues to investigate.

The Florida Times-Union adds more details, including that the owner of the four dogs, Lephus Felton, concocted a bizarre story, blaming the elderly victim for the deadly attack. Felton said the elderly man must have "reached through" the fence before the attack at some point. “All his stuff was close to the gate. He was teasing my dog,” Felton said of the victim. Felton said he was gone for 30 minutes and when he returned, a woman told him his dogs killed someone in his backyard.

Felton said one of the dogs is a rottweiler, and the others are a mix of rottweiler, German shepherd and chow chow. Two of the dogs, both 3-years old, are younger offspring of the parent dogs. 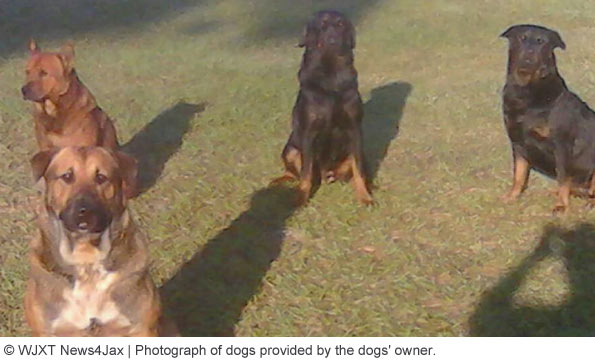 View the DogsBite.org Google Map: U.S. Fatal Rottweiler Attacks By State
1The Jacksonville ACO director mentioned in the article, Jim Crosby, is a longtime pit bull owner and advocate (note our 2008 post - The Anatomy of a Whitewash). In 2010, Crosby resigned as the director of Bay County Animal Control in Florida after one of his employees took home a pig in the facility's care named "Fluffy" then butchered and ate it. There was no mention of this in the PR puffery piece by Jacksonville.com after his hiring in March.