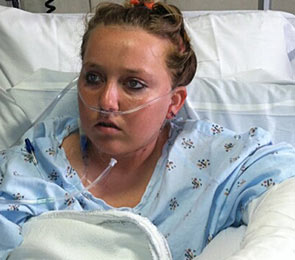 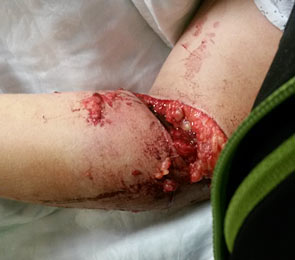 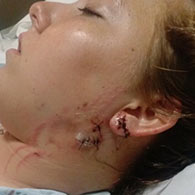 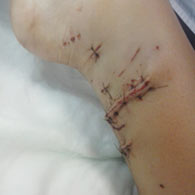 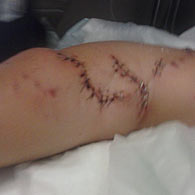 Ceara Schofield was attacked by three American bulldogs. Click an image to see a larger view.

Victim Recounts Attack
Opp, AL - On March 4, 2014, three family American bulldogs viciously attacked 18-year old Ceara Schofield and the dogs' owner, 37-year old Kristina Picktron. Both were hospitalized after the attack. Ceara's injuries were so severe, she was airlifted to Southeast Alabama Medical Center in Dothan. Six days after the attack, Ceara spoke with WAKA in an exclusive interview. Her older sister recently contacted DogsBite.org and shared Ceara's injury photos and a statement:

Ceara is the survivor of a vicious attack by three white American bulldogs. She is 18-years old and was attacked on March 4, 2014. Due to the severity of her injuries she was airlifted to Dothan, Alabama where she immediately under went emergency surgery. She was in surgery over four hours where they pieced her back together. She sustained 45 bite injuries that required over 300 stitches, 100 staples and drain tubes placed into both arms. She sustained bite injuries to her head, neck, ear, both arms, hands, both legs front and back, and her buttocks. The doctors told us they could not give us any reason for her to be alive other than God because of the severity of the injuries and the critical locations throughout her body that were barely missed. We have just passed two months since the accident and it has been a painful and hard two months. We know there is still a long road to recovery ahead of us, but we will continue to embrace each day because Ceara is a fighter and a survivor. If I were asked to give just one piece of advice it would be, CHOOSE YOUR FAMILY DOGS WISELY. No matter how well you think you may know them; Ceara had known these dogs for over four years. Never own more than one powerful dog breed either. By the grace of God Ceara survived a pack attack by these dogs. - Mary Cain

During the WAKA interview, Ceara told the reporter: "Well, they bit me twice and then I went numb, so I couldn't really feel anything, besides it felt like they was trying to play tug of war with me. So it felt like they was snatching me back and forth." It is no surprise, given this horrific description of what gripper breeds do, that doctors told her mother, Anita Adkinson, this is the worst attack they had ever seen and that the bite injuries resembled shark attack injuries.

The attack began after Ceara's small dog had gotten out of the room where it normally stayed. As she was chasing it down, the female American bulldog, who recently had a litter of puppies, attacked her. The two male bulldogs then joined in. Ceara told the reporter she believed the dogs were trying to kill her and she was right. Kristina, who owned the dogs with her husband, tried to get the dogs off Ceara and was badly bitten. All three bulldogs were put down after the attack.2

We greatly thank Ceara and her sister for sharing her devastating injury photos. It is important for readers to see up close the results of a gripper breed attack, breeds that "repeatedly attack" and when they clamp down, they "hold and shake" that body part, causing extensive soft tissue, deep muscle and bone damaging injuries. Ceara was attacked by three of these dogs; the owner was powerless to stop them. Kristina laying on top of Ceara, sheltering her, undoubtedly saved her life.

Ceara is 18-years old and extremely brave to come forward with her story. She and her sister do not want this to happen to anyone else. They hope their warning message is heeded by others. 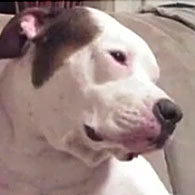 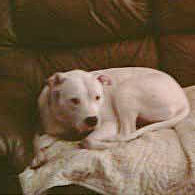 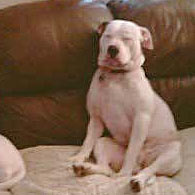 1If you missed it in the video, Kristina (or other person) drove them both to the hospital. Ceara describes having to hold her arms up in the car to keep from losing more blood. "Every time my heart would beat," she said, "blood would gush out of my arms." Not even a horror movie could sufficiently depict that drive to the emergency room.
2The elevated risk factor of three gripper breeds in a household, one having just had puppies, is off the charts. All dog breeds in this situation are likely to be more agitated than usual, elevating a "bite" risk scenario. With the gripper breeds, however, we can expect a "mauling" scenario requiring an airlift to a specialized trauma center.