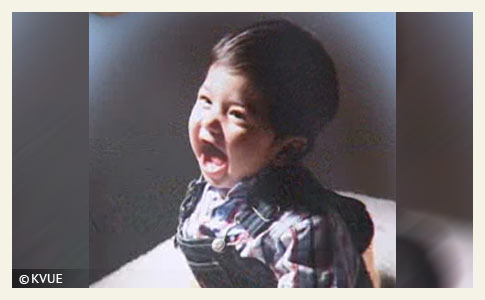 Great-Grandmother Named
UPDATE 04/01/09: The grandmother has been identified as the toddler's 58-year old great-grandmother, Irma Barrera.1 Her two pit bulls, Cane and Wrinkle, were both male and unaltered. Barrera said she placed the baby on her bed then went into the kitchen to get a bottle for the baby. That's when the pit bulls broke through the baby gate and attacked the infant. Barrera said she tried to stab her dogs with a knife in an attempt to get them to release the injured baby.

03/31/09: Dog Mauling Victim Identified
The victim has been identified as 7-month old Izaiah Gregory Cox. Police said the deadly attack started in the kitchen area, when the grandmother was warming a bottle of milk for the boy. When she turned around, she saw her two pit bulls viciously attacking him. A separate article said the dogs "broke down the baby-gate" to reach the child. The grandmother grabbed a knife and fought the dogs off long enough to place him into a crib. Then her own family pit bulls turned on her.

Investigators said the baby's grandmother was inside the home preparing a bottle for the baby, when the dogs broke down the baby-gate between the bedroom and kitchen. The dogs attacked Izaiah Gregory Cox. The police report says they "dragged [him] around like a rag doll."

The grandmother grabbed a knife and began stabbing the dogs to try to get them off of her grandson. She was able to get the boy into a crib, but the dogs then began to attack her. - News 4 WOAI, March 31, 2009

When EMS crews arrived at the Ruiz Street residence, they had to climb through a side window to get to the toddler, who later died at University Hospital of San Antonio. The dogs were shot to death by arriving police officers in the backyard -- the dogs' bodies were later taken away by animal control to be tested for rabies. The grandmother was also injured in the attack; she is still recovering at a local hospital. It's still unclear if anyone at the home will face any charges.

03/31/09: Baby Killed by Grandmother's Pit Bulls
San Antonio, TX - A 7-month-old boy was brutally killed by pit bulls while visiting his grandmother's home. The attack occurred after she left the baby alone with her pit bulls while she warmed a milk bottle. In the 3-year period of 2006-2008, DogsBite.org recorded 88 fatal dog attacks. 14% (12) of all dog bite fatalities involved a "watcher," a person such as a grandparent or babysitter, watching a child between the ages of 0-4. Of these fatal occurrences, 75% (9) involved a grandparent.

Emergency responders arrived at the scene of the attack, but couldn’t get past the two dogs to help the victim, according to San Antonio Police Department Chief William McManus. Several minutes later, police arrived and shot the two dogs allowing paramedics to enter the house to treat the victims. The baby was transported to a hospital with "major bite wounds all over his body" and died shortly thereafter. The family pit bulls also attacked their owner, the child's grandmother.

Relatives said the grandmother frequently babysits her grandson, but also said that when the baby is around, the pit bulls are usually outside in a small fenced-in yard. The dogs were kind to the grandmother, relatives said, but were aggressive toward others. One relative said the dogs bit her 8-year-old niece in the face once, and added she thought the dogs should have been put down back then. A sign on the front gate warns pedestrians on the street to beware of the dogs.

Neighbors were unsurprised by the attack. "Are those dogs dangerous? You better believe it," said neighbor Larry Salazar, who gathered with several others after they heard the gunfire. Ramon Sanchez, whose grandmother lives next-door to where the attack took place, said the two dogs were at least 120 pounds each and were vicious. "Not even the mailman gets by that gate," Sanchez said. "I’m not surprised by the attack; I’m surprised that it took this long," Sanchez said. 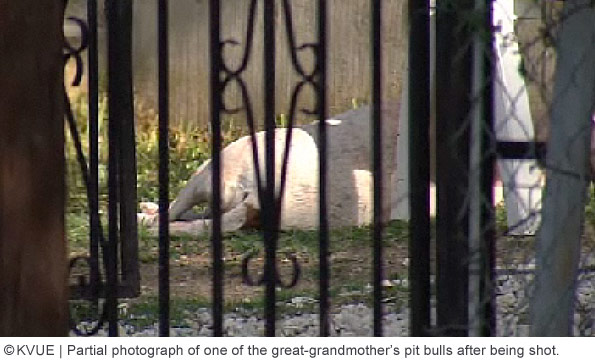 1The grandmother was originally identified as Irma Garcia.