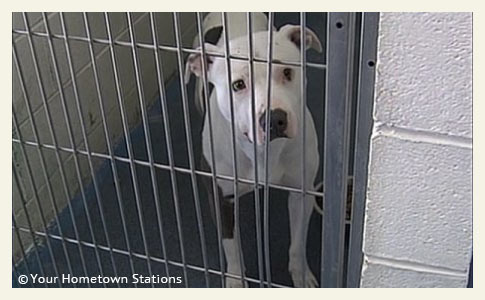 The pit bull seen in quarantine at the Allen County pound (video/Hometown Stations).

Blade Republishes
UPDATE 05/21/12: After pulling their first story, the Toledo Blade, we refer to as the Yellow or Biased Toldeo Blade, republished under a new title. This news entity has a long history of not just pushing the pro-pit bull cause, but was instrumental in bringing down former Lucas County Dog Warden Tom Skeldon and ensuring the passage of legislation that repealed Ohio's longstanding pit bull law. Makayla's death comes just days before May 22, when the repeal goes into effect.

If one does a search on Google News for "Makayla Darnell" guess what article is listed as "highly cited? (Screenshot). The trouble is, that article was removed and leads to an error.1 News began breaking over the weekend about May 22, the day the State of Ohio loses its 25-year old pit bull law, which ominously falls on day three of National Dog Bite Prevention Week this year. We expect much more news about this to follow and the death of Makayla Darnell to quickly be forgotten.

05/18/12: Autopsy: Death by Dog Bite
Lucas County Coroner Dr. Cynthia Beisser said Friday that the baby died from blunt force injury to the head. Dr. Beisser said it was consistent with a "dog biting down on the head." Apparently the baby's mother and grandmother were just a few feet away preparing food when the attack occurred. The fatally attacking dog remains in custody while the investigation continues. Dog Warden Julie Shellhammer confirmed that the dog was a male pit bull-mix about 4 years old.

The baby girl, Makayla Darnell, was just three days old. During interviews with the Allen County Sheriff's Department, family members said the dog was not aggressive before the attack. The pit bull mix is now in quarantine at the Allen County Dog Warden's Office.

Detectives are still investigating the incident, however, Sheriff Sam Crish says the baby was injured Thursday evening at a home on Thayer Road near Beaverdam. Makayla Darnell was in a baby swing while her mother -- Audrianna Myers and grandmother -- Janette Myers were in a room nearby. They heard a whimper and then saw blood on the swing. - Your Hometown Stations, May 25, 2012

05/18/12: Infant Killed by Family Dog
Monroe Township, OH - In a developing story, a 3-day old baby girl died late Thursday night after being attacked by the family pit bull-mix. Makayla Darnell was sitting in her swing in the living room and her parents were in the kitchen of their northern Allen County home at the time of the attack. The baby's parents, Audrianna Myers and Jared Darnell, drove the injured infant to Blanchard Valley Hospital where it was airlifted to Mercy St. Vincent Medical Center in Toledo.

The dog, a pit bull mix, was taken to Allen County Dog Warden's shelter, where it is being held in impound until the investigation is completed, Everett said. He did not know the fate of the dog.

“Right now it's being quarantined until we're done with the investigation,” Everett said. The dog is believed to be about 5 years old. Everett said there was no evidence it had ever bitten or attacked anyone before. - The Lima News

View the DogsBite.org Google Map: Ohio Fatal Pit Bull Maulings.
1The live Google News results link won't last long, which is why we also provided a screenshot. Commenters have begun leaving suggestions about why The Yellow Blade removed the piece. It is true that multiple versions of stories are often posted by news agencies and are later combined into an updated version. Very seldom do we run across the actual take down of a previous version. There were three version of the article. Version 1 contained the breed name in the title, content and URL: "infant-dies-after-attack-from-pit-bull.html"), Version 2 removed all breed names from the title, content and URL ("infant-dies-after-attack-from-family-dog.html"). Version 3 placed the breed back into the content and continued with the second URL ("infant-dies-after-attack-from-family-dog.html")