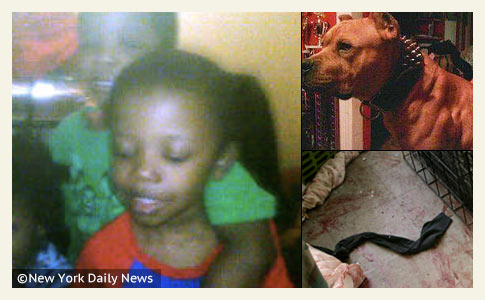 Jayelin Graham, 4, was killed by a "monster dog" belonging to his mother's boyfriend.

Missing Bodies
UPDATE 05/29/11: Parts of this story continue to raise questions, such as: Where is the third dog, and where is Dread? Might the two be in the same place? On Friday, after one of Dread's dogs ripped the throat out of Jayelin killing him, news media outlets reported that there were three dogs at the family's home: a cane corso, pit bull and shepherd-mix. By Saturday night, news reports merged the cane corso and pit bull into one dog, the latter having vanished.

The alleged killer dog, which appears to be a cane corso-pit bull mix, is depicted on Dread's Facebook page, as well as in many news articles.

Today, the New York Post reported that the dog shown on the Facebook page is not the attacker. What we know is true, is that of the 200 fatal dog attacks DogsBite.org has reviewed, it is not unheard of for a dog -- especially a fighting dog or one of high breeding value -- to vanish after a fatal attack. Such dogs are capital goods and too valuable to be euthanized. So where is that third dog? And, if the Facebook dog is not the attacker than which dog is?1

According to the same Post article, the last anyone heard from Dread was Friday night: "Neighbors said Jones, who belongs to the motorcycle club Ruff Ryders, rode up to the scene at one point Friday, but peeled away at 11 p.m., and has not been seen since." So after Dread trained his dogs to kill, as he allegedly told a neighbor, and one of those dogs killed his step-son, Dread flees Dodge while the boy's mother undergoes hours of questioning by police?

Another area that raises questions is Dread's breeding activities and the time frame of the dogs being in the home. Robin Parkinson, 56, told The Daily News that the first time she saw Dread with "three of the scariest dogs in Brooklyn" was four years ago. At this time, Dread told her, "I breed monster dogs." This does not negate statements made by the mother who said the dogs had only been living in the home for three months, but where were the dogs before?

Initially, we were concerned that the ASPCA -- a Manhattan-based pro-pit bull group -- would try to pull a fast one by mislabeling the breed. Our concern now is Dread, who has no "cane corso" friends on Facebook, but plenty of pit bull friends, primarily bully breeders. Craven Desires' aptly theorizes that Dread's corso-cross was used in bully kennel breeding operations. So where is that third dog? Where is Dread? Will any local news group investigate this further?

(It must also be noted that DogsBite is not used to the "flair and drama" of the mentioned New York daily newspapers. Operating in the Northwest and South, this style is new to us.)

05/29/11: Mother Speaks Out After Attack
In a new video, the mother of the dead child, Saquina Jubeark, said the family only had the 7-year old dog for 3-months (She did not say who sold her the mutant dog and told her, "It was good with kids" and "not aggressive.") She also said that there were only two dogs in the household. She said her husband was a "trainer" and that he wouldn't have taken the dog, named Machete, had he known it would have harmed someone in the home.

Clearly her husband to be, Damien "Dread" Jones, idolized the mutant; he used it for his Facebook profile image. In contrast, Saquina used one of her children for her profile image.

We expect the debate about this dog's breed to heat up. Given that the family also owned a pit bull, one cannot exclude the possibility that the wrong dog was photographed or that the family was sold a pit bull under the cane corso name. What is true is that both of these dogs, along with a shepherd-mix and a large snake in a home with three toddlers is like playing Russian Roulette. Molosserdogs.com offers more information on the Italian cane corso:3

The present-day Cane Corso exists in decent numbers, but because of reckless breeding and crosses with some bull-breeds, it is getting difficult to find a true representative of the breed. Although the initial efforts were focused on preserving the original farm dogs from Puglia and surrounding areas, a fair amount of English Bullmastiff and German Boxer blood was introduced in the early years of the revival programme to help expand the Cane Corso gene pool, but the use of these breeds unfortunately resulted in the appearance of certain physical traits which weren't associated with the Cane Corso Italiano in the past, creating some controversy concerning the proper breed type.
--snip--

The unrelated breed known as the American Corso Dog is a modern creation, developed in the United States by crossing the Neapolitan Mastiff with the Rottweiler and various Bandogges. Even though this American breed is often times presented as the Cane Corso, it has no real ties with the Italian breed. Most American and Canadian fanciers of the Cane Corso Mastiff regularly import dogs from Italy and are committed to the preservation and promotion of the true type and purity of the breed, but some western lines have been enriched with the blood of other working dogs, namely the Presa Canario, American Pit Bull Terrier, Neapolitan Mastiff, Bullmastiff, Rottweiler, Boxer and the aforementioned American Corso Dog, resulting in a great variety within the breed in the United States, bluring the lines between the American-bred Cane Corso Italiano and the American Corso Dog breeds even more. (Molosserdogs.com)

05/28/11: Mother Says Dog "Ate My Baby"
Brooklyn, NY - In a developing story, NBC New York reports that Jayelin Graham, 4-years old, was mauled to death by a pit bull inside his home Friday night. The Daily News reported that the boy's mother screamed, "Help! He ate my baby! He ate my baby!" Neighbors attempted to storm the home, but police held them back. Kenny Rishar, a superintendent at the building, said, "People were scared of those dogs." This was a tragedy waiting to happen, he said.4 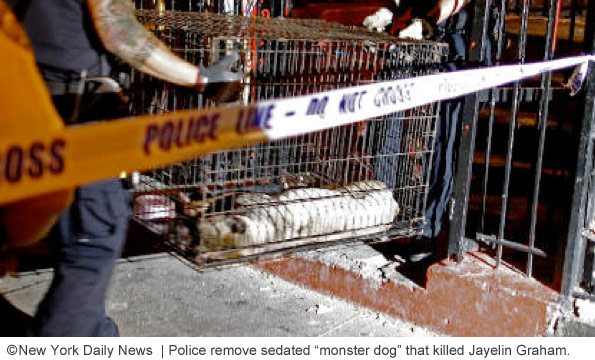 1Hopefully one local news group will go to NYC Animal Care and Control where this dog is being held under quarantine and photograph the animal.
2The reported 100 lb weight of this dog does not remove it from being a pit bull. The class of 100 lb pit bulls is indeed 100% American pit bull terrier.
3The alleged cane corso appears too tight skinned beneath its neck to be a full corso. But as Molosserdogs.com states, the variances and out-crosses of the American corso run the gamut. The ear cropping style is more distinct to corsos.
4Expect the ASPCA, a New York-based pro-pit bull group, to run extreme damage control. Recently, they were accused of unfair and deceptive fundraising practices.