The Buck Stops Where the Biting Incident Occurred

Burien, WA - On July 24, Jeanette Cunningham was attacked by a pit bull on a public street in the City of Burien. She suffered permanent disfiguring injuries.1 In September, Burien banned the dog from their city limits. Like many U.S. municipalities, Burien will not euthanize a dog deemed "dangerous" if the animal can be relocated. In response to the city's actions, Jeanette's husband crafted a letter and poster that was published in the B Town Blog.

Ordering dangerous dogs, which are frequently pit bulls and their mixes, to a new jurisdiction after a serious biting incident is standard operating procedure by municipalities and judges across the U.S. Whether the goal is to remove the dog's threat or to rehabilitate it is irrelevant. As Walter Cunningham states in his letter, what gives Burien the right to insert a dangerous animal that seriously injured a person into a new and unsuspecting community?

In the case of Jeanette, the owners of the pit bull, Gabriele and Juan Garcia, told Burien officials that the dog was sent to live with relatives in Yakima. Yet the City of Yakima banned pit bulls in 1987, and the ban remains in place today.2 Did Burien officials, specifically Animal Control Director Leslie Kasper3, ever contact Yakima officials and warn them that a dangerous pit bull is illegally residing in their city? Possibly provide Yakima authorities with an address?

The guess of DogsBite.org is a resounding "No."

Officials must take responsibility when a dog inflicts serious injury in its jurisdiction. Responsible actions do not include sending this animal to a new jurisdiction. There is little doubt that such policies were written into law due to the urging of dangerous dog lobby groups. Unfortunately, Burien and too many other U.S. cities willfully believe that "what happens" to a legally deemed dangerous dog is more important than Jeanette and the dog's future victims. 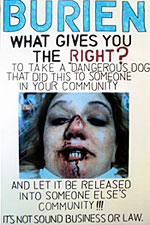 BURIEN what gives you the RIGHT? to take a "dangerous dog" that caused serious injury and disfigurement to someone in your community, and release it into someone else's community!!!

Don't tell me it's the law. Burien had the option well within the law to euthanize a vicious, uncontrollable, aggressive, "dangerous dog" that was harmful to the community. After deeming the dog "dangerous" Burien decided to return it back to the owners, with an order to remove the dog from the city after violating city code. Was this dog dangerous, aggressive, vicious, or uncontrollable?

There was a hearing held at Burien's city hall Sept. 21st, 2010 where the owners of the dog appealed the decision to remove the dog from the city for violating city code, in which Burien upheld their decision to release the dog and ban it from the city. Here is a quote from Leslie Kasper (Burien's lame Animal control authority) referring to the dog at the hearing.

"We were not able to move him between kennels or cages without being on a catch pole which is a long ridged pole used for animal control." Another quote from Chris Ingalls, reporter from KING 5 News, after the same hearing. "Animal control here in Burien says because of the viciousness of the attack and the aggressive nature of the animal it declared this dog dangerous in the eyes of the law."

James Lynch of Fox News reports, "It's probably some of the worst injuries that I have ever seen in a pit bull attack." KOMO News Commentator Ken Schram, "What the heck are they thinking. The owner of the pit bull was told to get the dog out of the city. What the hell is the sense of that?" "Sending a dangerous dog off to be some other city's problem is an asinine and stupid policy."

Jeanette's Attorney, Chris Davis, after the hearing. "The city is simply avoiding its responsibility to the public at large by allowing the dog to be shipped off to another jurisdiction and letting that jurisdiction deal with a potentially lethal animal."

A blog posting from one of the first two EMTs to respond to the scene, Kman says: "I was one of the 2 first EMTs on scene to render aid to this patient. This dog was extremely aggressive and we were very concerned about our and the patient's continued safety with this animal within striking distance. This poor woman will be disfigured for life and someone actually wants to keep this dog alive? Nurture or nature, folks it doesn't matter...if a human had done this they would be locked up for aggravated assault and quite possibly attempted murder (doing 10+ in Walla Walla4)." (Read complete letter)

1In August, family and friends raised over $5,500 from Burien businesses and residents to help pay for future reconstructive and cosmetic surgeries for the victim.
2Well written breed-specific laws have a 100% success record in U.S. courts. Yakima's ban is no exception.
3After the pit bull was confiscated, Leslie Kasper told KCPQ, "I believe that dog is very loving to people it knows." Another inexcusable pit bull apologist in a public service position -- whose job is to protect the public from dangerous animals. Craven Desires has more about Kasper in a related blog post.4Walla Wall is a maximum security correctional facility in the State of Washington. The Green River Killer, for instance, is serving out a life sentence there.