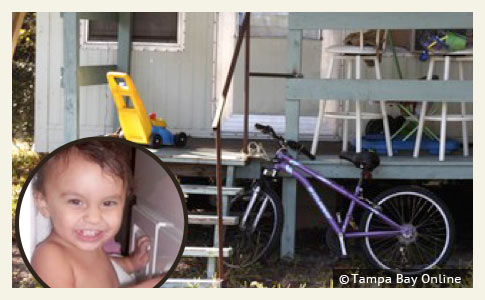 Dallas Walters, 20-months old, was mauled to death by a rottweiler-mix.

"Dog Just Attacked"
UPDATE 12/15/09: Just before the burial service of Dallas Walters, the boy's father clarified a few issues: "There was no cookie. My son was eating potato salad and the dog just attacked him." Essentially, the rumored "cookie" story was just that -- rumored. According to the Pasco County Sheriff's Department, the investigation into what happened is still ongoing. They say it doesn't appear anyone, including the dog's owners, will face any charges.

Dallas was at a family birthday party at his great-aunt's house Saturday night. That's when a Rotweiller-Labrador mix belonging to the great-aunt and her husband attacked the child.
Some reports said the dog was going after a cookie the boy dropped. His father says the attack was unprovoked.
"There was no cookie. My son was eating potato salad and the dog just attacked him." - Erik Waxler, ABC Action News, December 15, 2009

12/15/09: Dog Purchased Two Months Ago
New information has been released in the death of Dallas Walters. The year old rottweiler-lab mix that killed the boy was euthanized just hours later. The dog belonged to Lisa and Preston Evans -- Lisa is Dallas' mother's great-aunt. The male dog was unregistered and unaltered. The couple said they got the dog about two months ago from someone in Tampa who had placed a newspaper ad. Authorities are trying to contact the sellers of the dog.

The owners surrendered the dog, named Willie, along with a 3-month old rottweiler puppy; it is unclear from the article if the puppy came from the same seller. According to Pasco Animal Services director Denise Hilton, "[The dog's owners] said the dog had been playing all day with the kids at the party with no problems at all." Yet Andrew Walters, the father of Dallas, said that Willie was a dog he had not seen before that day and was supposed to be chained in the backyard.

Walters said his family is taking the loss "second by second." He added that he had yet to talk to the Evanses. "I can't,'' he said. "I don't trust my actions.'' Walters wants criminal charges filed. Kevin Doll, the spokesman for the Pasco County Sheriff's Office, said the death is under investigation. Yet the incident looks to be another "tragic accident," despite the fact that rottweilers have the second worst safety record regarding fatal attacks, dwarfed only by pit bulls.

12/13/09: Boy Killed by Dog at Birthday Party
New Port Richey, FL - In a chilling story, Dallas Walters, 20-months old, was killed after being mauled by a pet rottweiler inside his aunt's New Port Richey home Saturday night. According to the Pasco County Sheriff's Office, a birthday party was going on at Dallas Walters' aunt's house in Moon Lake when the incident occured. Deputies say the boy was eating a cookie then dropped it on the floor. When he went to reach for the cookie the aunt's pet rottweiler attacked.

"I ran over there, pulled the dog off him," said the boy's father Andrew Walters, "I tried to beat the hell out of him."

This horrific scenario is very familiar readers: 1.) An aunt, uncle or grandparent's dangerous dog, often a pit bull or a rottweiler, with likely little to no experience with children. 2.) A young child visiting the dog owner's home, possibly for the first time. 3.) It's either the "cookie" (or food related) story, which blames the child for the life-altering or deadly attack or it's the "warming a bottle" story, where the adult steps away briefly and the pit bull or rottweiler kills the child.