Dogs Euthanized archived
UPDATE 08/18/09: Authorities have rounded up 16 dogs (11 dogs and 5 puppies) suspected in the attack that killed two people. The court-ordered euthanasia of the mongrel dogs1 began Tuesday. Authorities are still seeking two other dogs seen in the area. It was also reported that the Schweders owned 20 cats and seven dogs (eight if Sherry's missing dog is included). There were no witnesses to the attack, and their bodies were found a few hundred feet from their home.

Sheriff's deputies, code enforcement officers and other officials spent most of Monday and Tuesday rounding up 11 adult dogs and five puppies, Oglethorpe County Sheriff's Capt. Shalon Huff said. One more was trapped Wednesday morning, leaving one still to be captured, she said.

"We're just lucky this hasn't happened before," said Susan Fornash, director of the Madison Oglethorpe Animal Shelter in Danielsville, where the captured dogs were held before being euthanized Tuesday under orders from a local judge ...

It took about 90 minutes to euthanize all 16 dogs, several of which were maggot-infested, Fornash said. No one asked that they be checked for rabies, and the sheriff directed that the carcasses be cremated immediately, she said. - CNN, August 20, 2009

08/17/09: Dogs Kill Two People archived
Lexington, GA - A retired college professor and his wife were found dead Saturday along a rural northeast Georgia road after being mauled by a dozen dogs the night before. Oglethorpe County Corner James Matthews said it was impossible to determine "what kind" of dogs killed Lothar Karl Schweder, 77, and his wife, Sherry Schweder, 65, (also known as Sherry Allen) a longtime UGA librarian. Matthews said the suspected dogs were not aggressive when he arrived on scene.

The owner of the dogs, Howard Thaxton, had moved away from his home about a month ago. Neighbor Lanier Bridges said the dogs remained on the property after medical problems forced him to leave. A friend would bring him over to feed the dogs, Bridges said. He added that the dogs had never been a problem in the past. According to Matthews, Thaxton's dogs were rounded up Monday by animal control officers and showed no signs of malnourishment or rabies.

A report from Fox 5 News shows some of the dogs in a video clip, which appear to be mixed combinations of German Shepherds, Labs, Chows, and Dobermans and bred among each other as well. Investigators believe Sherry went for a walk Friday night when she was attacked by the animals. When she didn't come home, her husband went to look for her. He drove down the road in his car and when he discovered her body, he got out. The same dogs then attacked him.

As the investigation into the double fatal attack continues to unfold, open questions remain. First and foremost, are Thaxton's dogs actually to blame? The Schweder's reportedly owned 6 dogs, but no further information was provided about them. Matthews, who lives just two miles down the road from the attack, said: "There are a lot of weird circumstances with this one," he said. "I've been a coroner for 28 years, and this is one of the weirdest cases I've investigated." 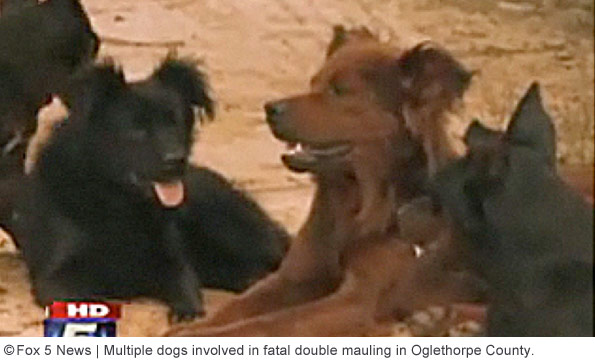 1The term "mongrel dog" refers to a lack of breed distinction amongst dogs born in the wild, or born into homes due to their owners allowing free roaming. We've gathered some of the dog images into a viewable PDF file. It must be noted that the first image appears to show a full-blooded Doberman Pinscher.