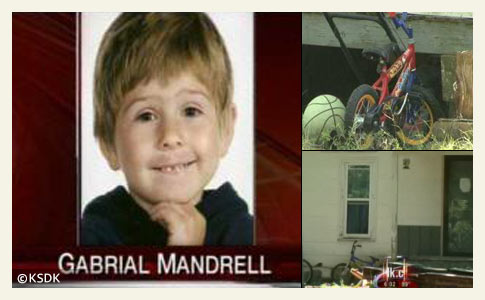 Gabrial Mandrell-Sauerhage, 3-years old, was killed by up to three dogs.

Dogs Euthanized
UPDATE 06/30/09: The three dogs involved in Gabrial's death have been euthanized: two pit bull-mixes and a collie-mix. Police said in a previous statement it is believed the collie-mix was tied up during the incident while the pit bulls were loose. In a press release issued Tuesday by the Williamson County Sheriff's Department, it stated that "Gabrial suffered at least one bite that would have made 'yelling impossible,'" whereby eliminating possible child neglect charges.

The release also stated the attack "might have been triggered by a stuffed animal that was found in the yard," which is perhaps the most alarming distortion DogsBite.org has ever run across. "Normal" family dogs do not attack and kill children because the child may be holding a stuffed animal. Pit bulls, on the other hand, will attack and kill unpredictably and unprovoked as documented by multiple fatality studies (See also: Triggers: What Prompts a Pit Bull to Attack?).

To highlight the questionable issues raised by the press release, we have included part of the article below. The tragic death of Gabrial and subsequent investigation also demonstrates two important issues often seen in serious and fatal attacks: 1) The possible protection of parents after the attack because the parents have already suffered a terrible loss. 2) And, at what point will, "Our pit bull never showed aggression before" become an inexcusable legal defense?

"The couple had three dogs, two pit bull mixes and a collie mix. Police said in a previous statement it is believed the collie mix was tied up during the incident while the pit bulls were loose.

Cundiff said the child was attacked about 200 feet from the home and crawled from the window, which was at the opposite side of the house as the adults' bedroom. The release went on to state that Gabrial suffered at least one bite that would have made "yelling impossible."

"The residence didn't have air conditioning," Cundiff said in a news release issued Tuesday. "Numerous box fans running at the same time of the incident would have made it very hard for the adults in the house to hear anything outside."

Sweeney and Robinson requested all three dogs be euthanized the night of the attack, but the lead detectives called for the animals to be held at Williamson County Animal Control shelter until the investigation was complete.

In a release Tuesday, Cundiff said the attack might have been triggered by a stuffed animal that was found in the yard.

"It appears Gabrial brought the stuffed animal out with him when he left his bedroom through his open window," the release stated.

Cundiff said the family told detectives no aggression "had ever been shown to any family member from any of the three dogs."

However, Amy Fowler, a neighbor, said the pit bulls were often loose and were a nuisance, threatening members of her family in their yard. Fowler said she witnessed Gabrial playing with the collie several times, outside and unsupervised. She said the collie mix didn't seem to cause any problems."

06/29/09: DCFS Opens Investigation
The Illinois Department of Children and Family Services (DCFS) has launched an investigation into Gabrial's death. Spokesperson Kendall Marlow said it isn’t the first time the state has been in contact with the boy's mother, although prior investigations were not related to animals and involved another child. Back in January, the DCFS was criticized after placing Alex Angul into a home with "known" dangerous rottweilers that subsequently killed the child.

06/28/09: Death Ruled "Accidental"
Johnston City, IL - Williamson County authorities say that on Saturday, June 27, 3-year old Gabrial Reese Mandrell was asleep, then woke up and "pushed out the screen" in his bedroom window. The child then "crawled out the window," and was attacked by at least one of the family's 3 dogs. The injured boy was found 200 feet away from his home and was pronounced dead shortly thereafter. An autopsy confirmed that Gabrial died due to multiple dog bite injuries.

A collie-mix and two pit bull-mixes, which had been loose outside, were taken from the home.