Stanley Hartt, 64, was killed by a pack of dogs while walking in Tucumcari, New Mexico

Man Killed by Dogs
Tucumcari, NM - On Thursday, the New Mexico State Police Investigations Bureau announced that a man in Tucumcari had been killed by a pack of five dogs. The Quay County Sheriff’s Office requested that the agency investigate the death of 64-year old Stanley Hartt. The deadly attack occurred on February 1 at about 8:00 pm while Hartt was walking on 11th Street near Gamble, states the release. Hartt was pronounced dead at the scene by the Office of Medical Investigator.

One of the five dogs was “euthanized by a Quay County Sheriff’s deputy” following the attack, states the release. The remaining dogs have been located and turned over to Quay County Animal Control, states the release. All five dogs were initially described as mixed-breeds. In an advisory update, while authorities still searched for the dogs, the Quay County Sheriff’s Office described one of the dogs as a “tan German Shepherd mix.” The last dog was found by 11:00 am Thursday.

The Quay County Sun spoke to Tucumcari City Manager Paula Chacon, who said that a full-time animal control officer for Tucumcari would likely begin work this week -- police had been handling animal complaints during the absence of this. Both Undersheriff Russell Shafer and Tucumcari Mayor Ralph Moya said that a fatal dog attack was unprecedented in the city and county, which is about 175 miles east of Albuquerque. “I’ve never heard of a dog attack like this,” Shafer said.

The Sun also noted that Hartt had recently written a guest column for the publication. In a piece titled, “Best days still coming for Tucumcari,” published in November 2022, Harrt wrote that he had settled in Tucumcari in early 2021. He liked the “haunting quality of this place.” He was thankful “about all the things Tucumcari is missing,” such as floods, tornadoes or wildfires, as well as “excessive crime, mass shootings and political crazies.” There was no mention of loose dogs. 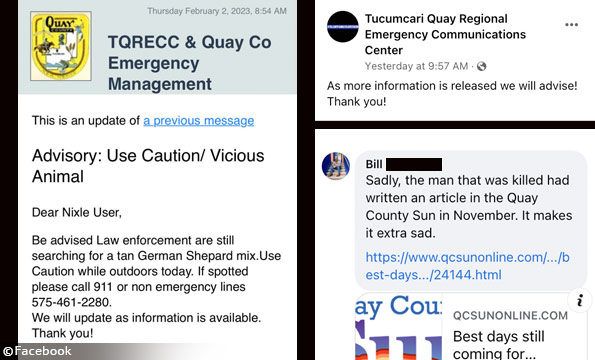 Quay County authorities identified one of the suspected dogs as a tan German shepherd-mix.