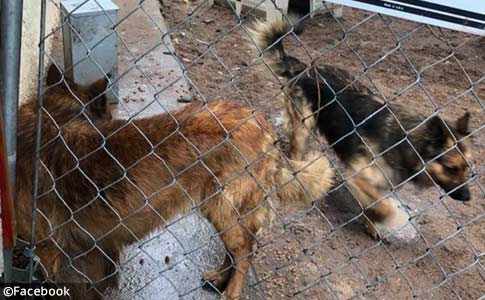 Two German shepherds that escaped a fenced enclosure and attacked the victim.

Owner Talks to Media
Fairacres, NM - Back in January, we were alerted to a local resident's public Facebook posts. "Our neighbor was attacked by two dogs last night in his own yard," Stoney wrote. "The neighbor's dogs jumped his fence." Another neighbor heard the attack and pulled the dogs off of him. "They were eating him! He actually lost pieces of his body. They took chunks out of him. He died twice before they got him to the hospital," he wrote. Three days later, Stoney posted that the man had died.

We sent the Facebook posts to the Las Cruces Sun-News, but saw nothing further until a KVIA news report emerged February 7. The victim has been identified as 56-year old Saad Alanazi. He was attacked on January 27 in the 5200 block of Freese Lane, according to the Doña Ana County Sheriff's Office. The same police agency that investigated the death of 6-year old Avery Jackson-Dunphy, who was killed by multiple dogs being fostered by his grandparents in November.

KVIA spoke to the owner of the dogs, Maria Kelley, who kept her two German shepherds chained inside a fenced-in yard. Kelly was at work when one of her chained dogs jumped the high fence, and may have been left hanging from the fence, choking. Kelley suspected her second chained dog might have pushed through a hole in the fence, reports KVIA. For a perspective of Kelley's property, see her two penned in dogs next to the fence photographs in the KVIA video footage.

No one witnessed the beginning of the attack. Neighbor Rudy Clark saw the dogs attacking Alanazi and was able to get the dogs off by striking one on the head with a walking cane. "They destroyed him," Clark said. "This man was suffering. They were tearing him apart.” The dogs inflicted deep wounds in Alanazi's legs. He was rushed to MountainView Regional Medical Center, where he died after losing a large amount of blood, according to documents obtained by KVIA.

Doña Ana County Sheriff Kim Stewart said the bites were not significant enough to cause the man's death and that Alanazi had pre-existing health conditions that also contributed to his death. Kelley was cited for several ordinance violations by animal control after the attack, but no criminal charges are expected. Kelley said she was deeply disturbed by what happened, but she also claimed to have "no idea" how the dogs got out, except that "someone" had unclipped her dogs.

Perhaps in the history of this nonprofit, we have not seen a fatal dog attack involving two chained German shepherds, where one leaped over an 8-foot fence and nearly choked itself to death. That level of chaining frustration and climbing agility typically involves pit bulls. Kelley has many photos of her backyard on her Facebook page, which is filled with herb plants, flowers, trees, bird feeders, a windmill and more. Kelley is clearly quite proud of it and has spent many hours caring for it.

The dogs, however, are not part of her lovely garden. They are relegated to and cordoned off in a bleak section of the property. Her dogs are merely a cheap security system. Kelley calls them that too, "My security guards." Not only were the dogs in a fenced area; they were chained, indicating they had escaped before. Whether they escaped to tear up her garden, to go after her many chickens, which are cordoned off in a separate section, or escaped to go off-property is unknown.

That Alanazi may have tried to unclip the dog hanging from the fence, choking itself, is certainly possible and is a circumstance we have seen in a fatal dog attack before. In 2007, Amber Jones, 10-years old, saw that her neighbor's pit bull had once again gotten its collar caught on the chain-link fence while trying to jump the fence. She had helped the dog in the past by unhooking the collar. But this time when she tried to help, the dog attacked her neck and stomach, killing her.1

As we were writing this post on February 8, the Sun-News reported this fatal attack and a severe injury attack. We continue to be weary of Doña Ana County Sheriff Kim Stewart, who told the Sun-News, "Some kind of intent to let the dogs loose on anyone or command the dogs (is required)," in order to file criminal charges. According to the New Mexico state felony dog attack law, that's not true. Prosecution only needs to prove the owner had knowledge of the dog's vicious propensities.

C. An owner of a dangerous or potentially dangerous dog that causes serious injury or death to a domestic animal, without provocation, is guilty of a fourth degree felony and shall be sentenced in accordance with the provisions of Section 31-18-15 NMSA 1978.

D. An owner of a dangerous or potentially dangerous dog that causes serious injury to a human being, without provocation, is guilty of a third degree felony and shall be sentenced in accordance with the provisions of Section 31-18-15 NMSA 1978.

F. Prosecution pursuant to this section requires a showing that: (1) an owner knew of the propensity of a dog to inflict serious injury; or (2) the dog had previously been found by a court to be a dangerous or potentially dangerous dog. 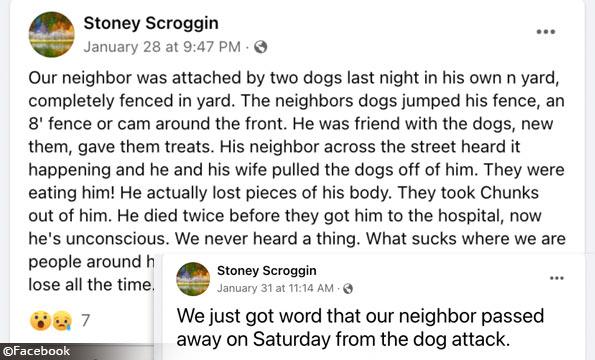 A neighbor of the victim publicly posted to Facebook about the vicious attack on January 28. 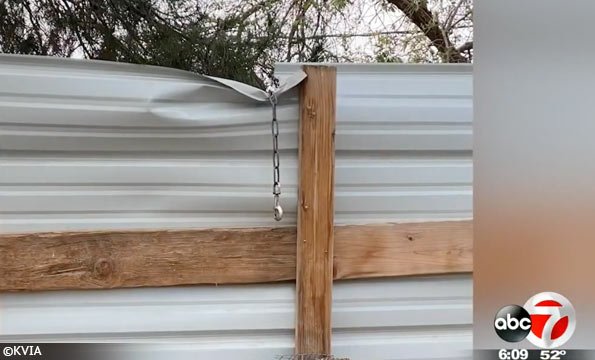 The owner's approximately 8-foot high damaged fence with the dog's chain hanging over it.

1The pit bull that killed Amber had a history of being chained. But it is unclear if it was chained at the time of the attack. An article published at that time stated: "Banda said Chuey could 'easily' leap over his chain-link fence, so he kept the dog chained to a tree whenever he and his wife were away. No one was at the Banda home when Amber Jones was attacked, he said. It's unclear if the pit bull was chained when the attack occurred, said Lisa Norwood, spokeswoman for Animal Care Services."